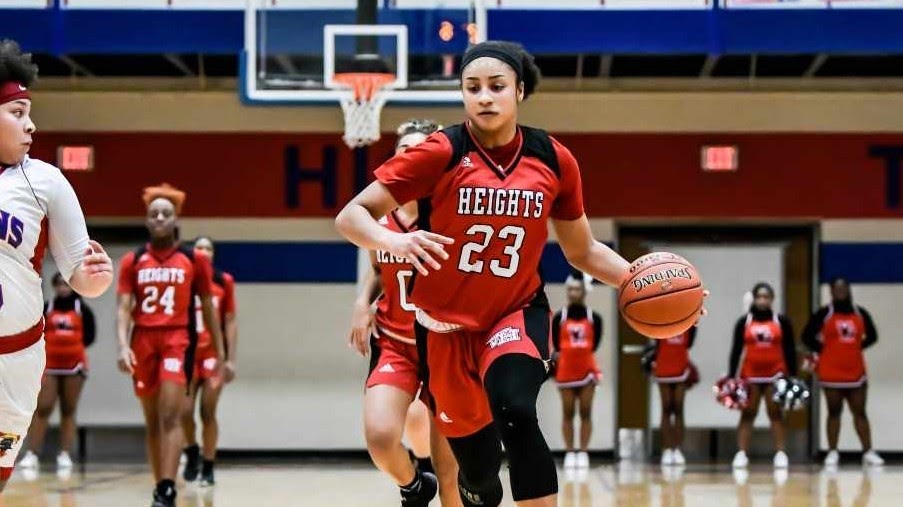 Zyanna Walker missed the end of her sophomore season after tearing her ACL, but the star guard will be back this winter to help the Wichita Heights Falcons make a run at their first state title in nine years. (Photo: David Lewis)

WICHITA, Kan. (BVM) — There is no denying that Wichita Heights has enough talent to win its eighth girls basketball state title in 2021. But the Falcons also appeared to be good enough to win it all the past two seasons, only to lose in the state quarterfinals.

The Falcons didn’t stay healthy last season. They lost star guard Zyanna Walker to a torn ACL in February and had to finish the year without their best player. Kansas wouldn’t crown a state champion anyway after the tournament was shut down due to the COVID-19 outbreak, but Wichita Heights would’ve likely been one of the final four teams standing when the season ended had it not lost one of the most heavily-recruited girls basketball players in the state.

“You take away 20 points, 10 rebounds, that’s a lot to lose,” Palmer said. “And it’s not just the numbers and stats she put up, just having her presence not being there, that hurt the girls mentally, too. … She’s such a humble, hard-working kid and for something like that to happen to her, [to have] something she loves to do get taken away, she felt it and the girls felt it for her. It was huge to lose her.”

Walker was only a sophomore when her season ended prematurely last winter, but she was already considered the best player in the state for her class. ESPN rates her as a four-star prospect and she’s ranked No. 20 overall among the Class of 2022 in the HoopGurlz Super 60 Recruiting Rankings. She has over 20 Division I college offers from major programs all over the country, but her main focus right now is getting back on the court with her Wichita Heights teammates.

“It’s been challenging at times,” Walker said, “but I’ve just kept my mind on getting back and I’ve been motivated to get back, especially watching my team play. .. It’s hard to watch so I’m just very excited to get back and play with my team.”

The hope is that will happen sometime in January. And when Walker does come back, she’ll be returning to a starting lineup that also includes two other future Division I college players: senior Laniah Randle and junior Cayanna Stanley, both of whom hold offers from several schools.

When the Falcons are fully intact, the high expectations will also return for a program that has captured seven state championships, but none since winning back-to-back titles with undefeated seasons in 2011 and 2012.

“I always set the bar high with these kids,” said Palmer, who’s in his fifth year as the Wichita Height’s head coach after spending seven years as an assistant under Kip Pulliam. “I’ll ask them to shoot for the stars so the expectations are always high. They work really hard at practice, especially my younger girls who come in and see you’ve got three girls with Division I offers on the team, and they set the standard for this program.”

There’s reason to believe the Falcons can meet their own high expectations this season, especially with the return of Walker, whose third year could be the charm.

“As a team, I feel like we can win it all,” Walker said. “We can win state. We have the talent. We have the chemistry. I’ve been playing with some of these girls for a long time so I think we can do it.”