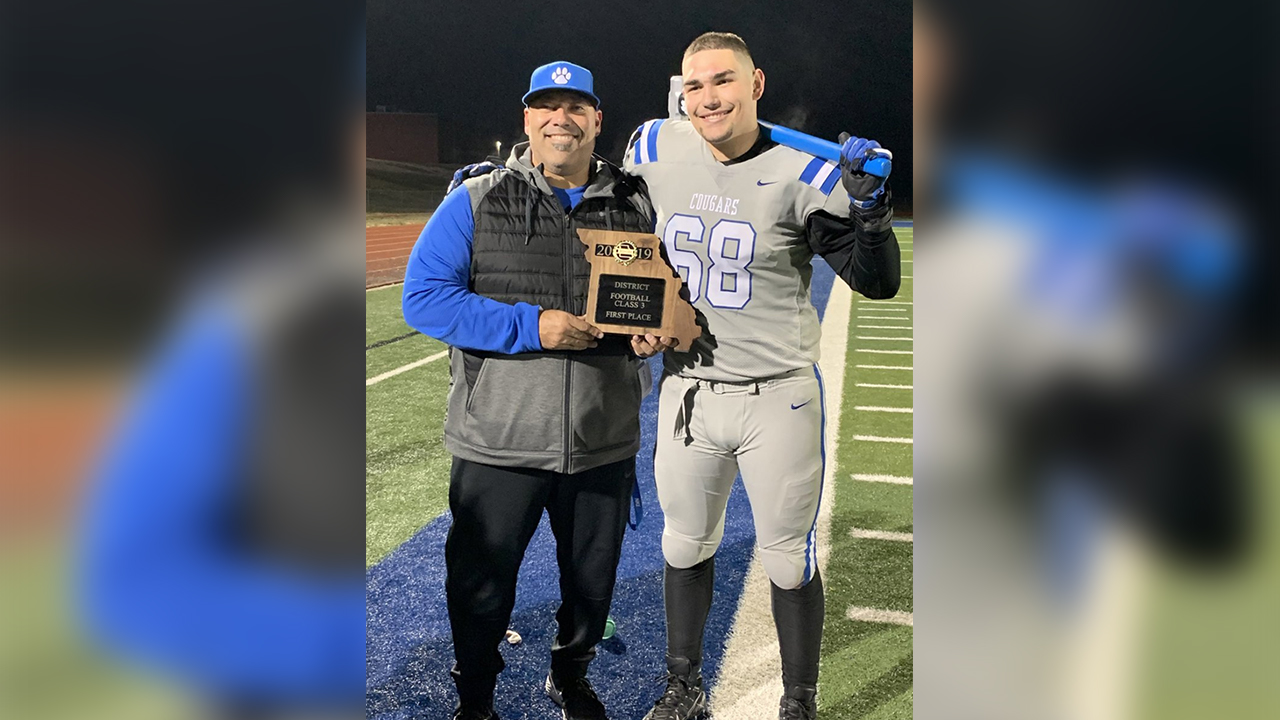 Gabriel Rubio, right, has learned the defensive tackle position from his father and former NFL player, Angel Rubio, left, and will take that knowledge with him as he begins his career with the Notre Dame Fighting Irish. (Photo: Theresa Rubio)

SAINT PETERS, Mo. (BVM) — Gabriel Rubio has been a star on the defensive line for Lutheran High School of St. Charles County. Despite a challenging senior season due to injuries and COVID-19, Rubio had a junior year for the ages in 2019. Now, he will look to replicate that success playing for the Notre Dame Fighting Irish.

Rubio began playing football in second grade and, as a bigger kid than most growing up, always played on the line. The now 6-foot-6, 295-pound lineman has been involved with several other sports, also competing in wrestling and track and field during high school.

However, football was quickly the top sport in the eyes of the 17-year-old.

“In the beginning, football was just one of those extracurricular activities,” Rubio said. “But it started to grow on me as I saw and learned more about the game. The ability to go out and hit people, block and overall be a team together were the main factors that really brought me in.”

Anyone who has seen Rubio play in recent years is happy he decided to pursue football. The defensive lineman, who has a quick first step in addition to quick hands and skilled movement, has looked up to fellow linemen such as Reggie White, John Randle, Aaron Donald and Joe Greene.

But Rubio hasn’t had to look any further than his own household to learn from a former NFL player. His dad, Angel, was drafted by the Pittsburgh Steelers in the seventh round of the 1998 NFL Draft. He would eventually go on to play for the San Francisco 49ers and Arizona Cardinals as well.

In addition, Angel continued his pro career in the XFL with the Las Vegas Outlaws, as well as the Arena Football League (AFL) with numerous teams. A former defensive lineman as well, Angel has been the perfect mentor over the years for Gabriel.

“He taught me everything that I know from a defensive line perspective,” Gabriel said. “He is my defensive line coach at the high school level and has always been one of my coaches through my little league years as well. He’s prepared me in the most astounding way anyone can prepare you for anything.”

If Gabriel’s football career to this point is any indication, he could not have been taught the game, or his position, much better. The 17-year-old began playing with the O’Fallon Renegades in his youth. As he grew, Gabriel began showing a special talent and a high potential before entering high school at Lutheran St. Charles.

In his freshman and sophomore seasons of high school football, the Cougars would struggle a bit, hovering near the .500 mark. But Gabriel still played well, and between his high school tape and working out at various camps, the 17-year-old began garnering college attention.

Although the Cougars had a young team going into Gabriel’s junior season, they improved vastly to a record of 10-3, making a deep postseason run all the way to the state quarterfinals.

For Gabriel, the 2019 campaign served as a breakout year as well. The defensive lineman racked up an impressive 17 sacks — including seven in one game against O’Fallon Christian — as well as 117 tackles. Of those tackles, 46 would go for a loss, and Gabriel even recorded 15 tackles for loss in one game alone.

Expectations remained high for Gabriel and the Cougars as they entered the 2020 season. But with injuries alongside schedule difficulties caused by the COVID-19 pandemic, the fall campaign was a challenge for Gabriel and Lutheran St. Charles. Although the team finished with a winning record, they played just seven games, and had a span of 49 days where they would suit up for just two contests.

“The goal in my senior season was to train for college,” Gabriel said. “Fortunately, we were able to have the season. We had to cancel a couple games but we still ended up having a good season. It was difficult because in the third or fourth game I tore my meniscus … by the time I got back on the field it was already the playoffs because we had a Covid deal and then two other teams canceled. I still enjoyed every minute of the season and was happy I had that last chance to play with my brothers on the field.”

Although the final season of his high school career may not have gone exactly as planned, there is no doubt Gabriel finished off strong, while also continuing to make his name known.

Coming into the year, the four-star recruit was ranked by many as a top-five defensive tackle in Missouri, and a top-10 defensive tackle nationally in the Class of 2021. While he is the ultimate team player, those numbers are something to be proud of, and they have motivated Gabriel along the way.

“It’s very special because it brings light to my school and brings light to my teammates,” Gabriel said. “We have more people coming in for our football program than at any other time and basically me and a couple of my other teammates were the trailblazers for that to happen. It motivates me everyday to stay up there to be the best and beat the best. I don’t think that’s going to go away anytime soon.”

Seen as an elite prospect by numerous college programs, Rubio received plenty of interest during the recruiting process. But before his senior season last fall, he already had his commitment locked up after deciding to become a member of the Notre Dame Fighting Irish.

Gabriel first began talking with Notre Dame during his sophomore year. After gaining notice at a camp put on by the university, he and the school stayed in touch and formed a relationship. During spring of his junior year, Gabriel was officially offered by the Fighting Irish.

“Immediately after we hung up I knew I had seen enough of all the other colleges and knew I wanted to go there,” Gabriel said. “So, I called them back up and silently committed.”

While Notre Dame was always the top choice for Gabriel, he also was considering some similar big-time programs, including Georgia, LSU and Iowa.

Now, the Lutheran St. Charles senior is eager to get started at Notre Dame, getting to play with a storied program that is coming off recent success after a College Football Playoff appearance in 2020.

“I’m extremely excited,” Gabriel said. “It’s one of those once-in-a-lifetime experiences to be part of a nation-wide-known and even worldwide-known team.”

Gabriel will actually be an official part of the Fighting Irish program in just a couple of weeks, as he will enroll early with hopes of contributing early on in his freshman season.

“The decision to enroll early came basically halfway through my sophomore year,” Gabriel said. “I knew some schools would allow me to because most colleges are trying to get their early-enrollees in so they can get them up to speed a little bit faster in the spring.

“I hope to make an immediate impact on the team whenever I report. I want to learn as much as possible and get to know the guys as much as possible just to create that family bond. The ultimate goal is to start as a freshman and just soak up as much information as I can from the guys who have been doing it four or five years now.”

Throughout his career at Notre Dame, Gabriel hopes to keep a starting role at defensive tackle. Of course, he knows that there is more to life than just sports, and obtaining a degree is a top priority for him before he leaves South Bend, Ind. as well.

Outside of football, the 17-year-old will also continue with his recently found love of cooking and baking. Gabriel’s mom actually owns a local bakery in St. Charles, Mo. where he has worked and learned how to bake. His father also makes many authentic Hispanic and Mexican dishes, leading Gabriel to want to do the same.

“Through this quarantine, having nothing to do except workout, I started to pick up other hobbies,” Gabriel said. “So I figured I might as well start cooking. I knew I was going to be moving on to college soon so I just wanted to see what I could learn from them.”

Gabriel has begun making pies, as well as several authentic dishes like his dad such as enchiladas, and his favorite, “firehouse” chili.

Although the four-star prospect could succeed in a future career in any of his multiple talents, it is football that is No. 1, and hearing his name called on Sundays in the future is the ultimate dream. Creating a father/son duo of NFL players between he and Angel would also be something special for Gabriel and the Rubio family.

“I’ve always dreamed of playing at the professional level,” Gabriel said. “It’s going to take a lot more effort and a lot more commitment than anything else I’ve ever done in my life. And I’m fully prepared to do whatever it takes to get there.

“It would be amazing to get there and there’s no better feeling than making a career out of the sport that you love. I just can’t wait until I am able to get that opportunity.”