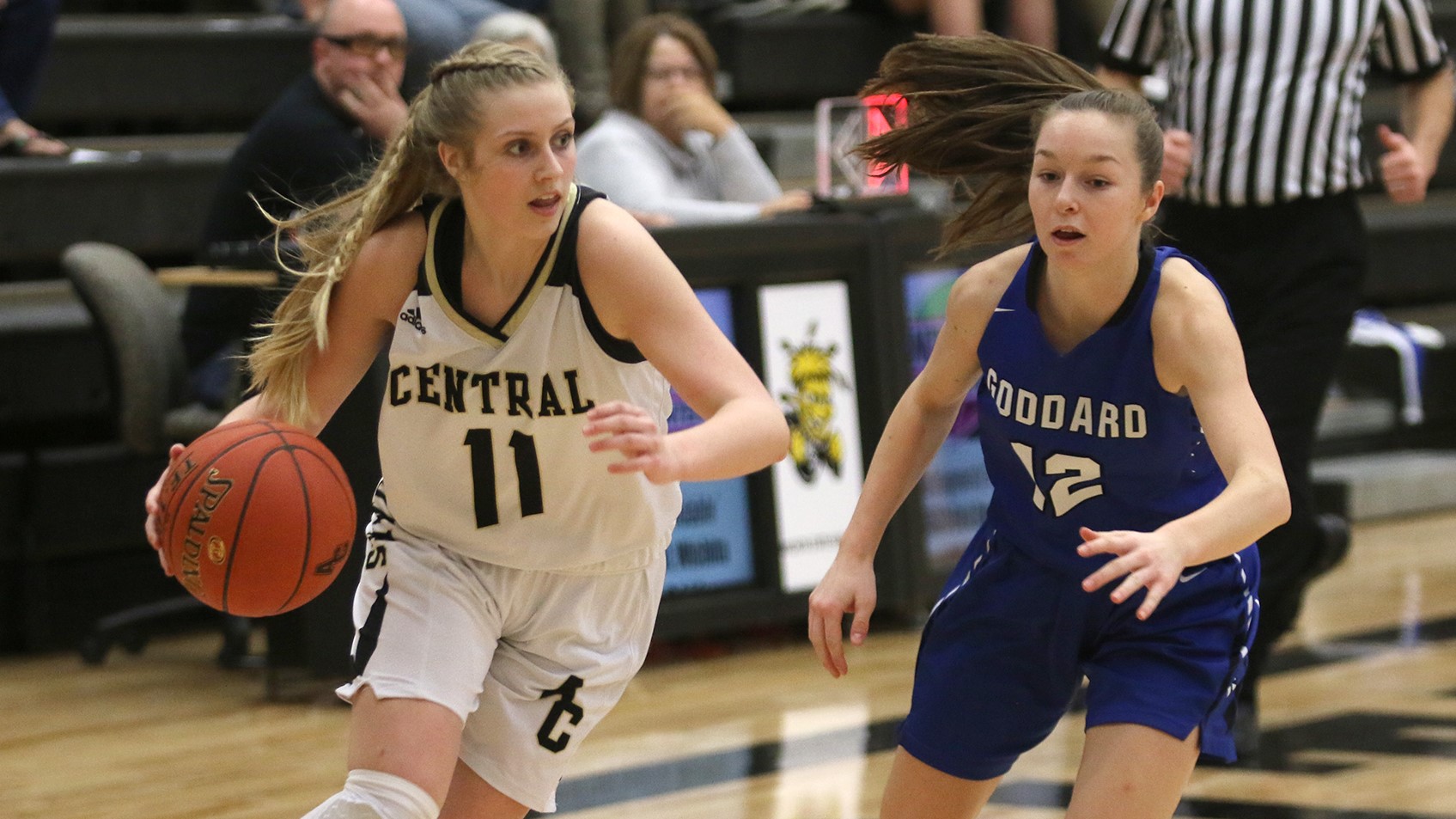 Junior Ellie Stearns is part of a strong group of returning Andover Central players who have high expectations again after their season was cut short in the state semifinals last year. (Credit: ACHS Journalism)

ANDOVER, Kan. (BVM) — Stana Jefferson has led some very successful teams over the course of her long tenure as Andover Central High School’s girls basketball coach. The Jaguars have reached the Final Four of the KSHSAA state tournament six times since 2006, with two of those teams, 2008 and 2010, completing undefeated state championship runs.

While it’s been more than a decade since Central has achieved such perfection, Jefferson currently has a group of players with the potential to put together a similarly special season this year.

Expectations are high this year for the Jaguars, who are the No. 1-ranked Class 5A team in the Kansas Basketball Coaches Association poll, but the same could be said for last year’s team, which had to handle something unlike anything any previous Central team has before. The Jaguars were 22-1 and reached the Class 5A state semifinals before the tournament was canceled due to the COVID-19 outbreak. It was a devastating blow to Central just as it was for so many other teams across the country who saw their seasons end prematurely. But many of those same players on last year’s team have returned this season, and it’s almost as if they’ve picked up right where they left off.

“The girls really never stopped the season,” Jefferson said. “It was kind of like we went on quarantine, they all just kept working out, we came back together this summer when we were allowed to and when we started up this year it was like last year never really ended.”

The Jaguars’ top five scorers from last season are back, including the team’s only two seniors, Bailey Wilborn, a University of Maine commit whose 14.3 points per game are second-best on the team, and Jaden Newfarmer (6.7 ppg), a Washburn University pledge. The team’s top underclassman, meanwhile, is just scratching the surface of her potential. Sophomore Maddi Amekporfor (12 ppg) is Central’s third-leading scorer again after making an immediate impact as a freshman last year.

“She has no clue just how good she can eventually be,” Jefferson said. “Just even from last year to this year, she’s starting to develop other parts of her game. We’re going to watch over the next couple of years and she’s going to be pretty exciting to watch.”

Unlike Amekporfor, junior Ellie Stearns didn’t get to play her freshman year because of an injury, but she played a big role in her first season of high school basketball as a sophomore, and she’s averaging 11 points as a junior. But Stearns, who Jefferson calls a “fierce competitor,” is much more than just another scorer for the Jaguars.

“She’s got a great IQ of the game and she’s the one who sees the extra pass and she sees what’s coming,” Jefferson said. “She’s a great defensive player and she’s made all of my other players better when she guards them in practice.”

Wilborn, Newfarmer, Amekporfor and Stearns are part of a strong supporting cast for the Jaguars’ unquestionable star player. Junior standout Brittany Harshaw has been Central’s best player since she first stepped on the court as a freshman and she’s continued to get better every year. The 6-foot Creighton University commit is averaging 20 points this season after leading the Jaguars with 17 per game as a sophomore and 14 per game as a freshman.

“She went through a great maturing stage,” Jefferson said. “I told her, ‘You can’t be one-dimensional. If you want to go on and play and be impactful into a good college program, you have to develop every part of your game,’ and I think that’s where she’s at right now.”

With Harshaw leading the way for a talented and experienced group of players who are determined to finish what they started last season, Jefferson might be coaching the next team to achieve the level of success that future Jaguars will strive for in years to come.

“I always tell them, ‘You have all of the potential that those other teams who went undefeated did,’” Jefferson said. “If we can keep it all together, we have the potential to win a state championship. I truly believe that.”