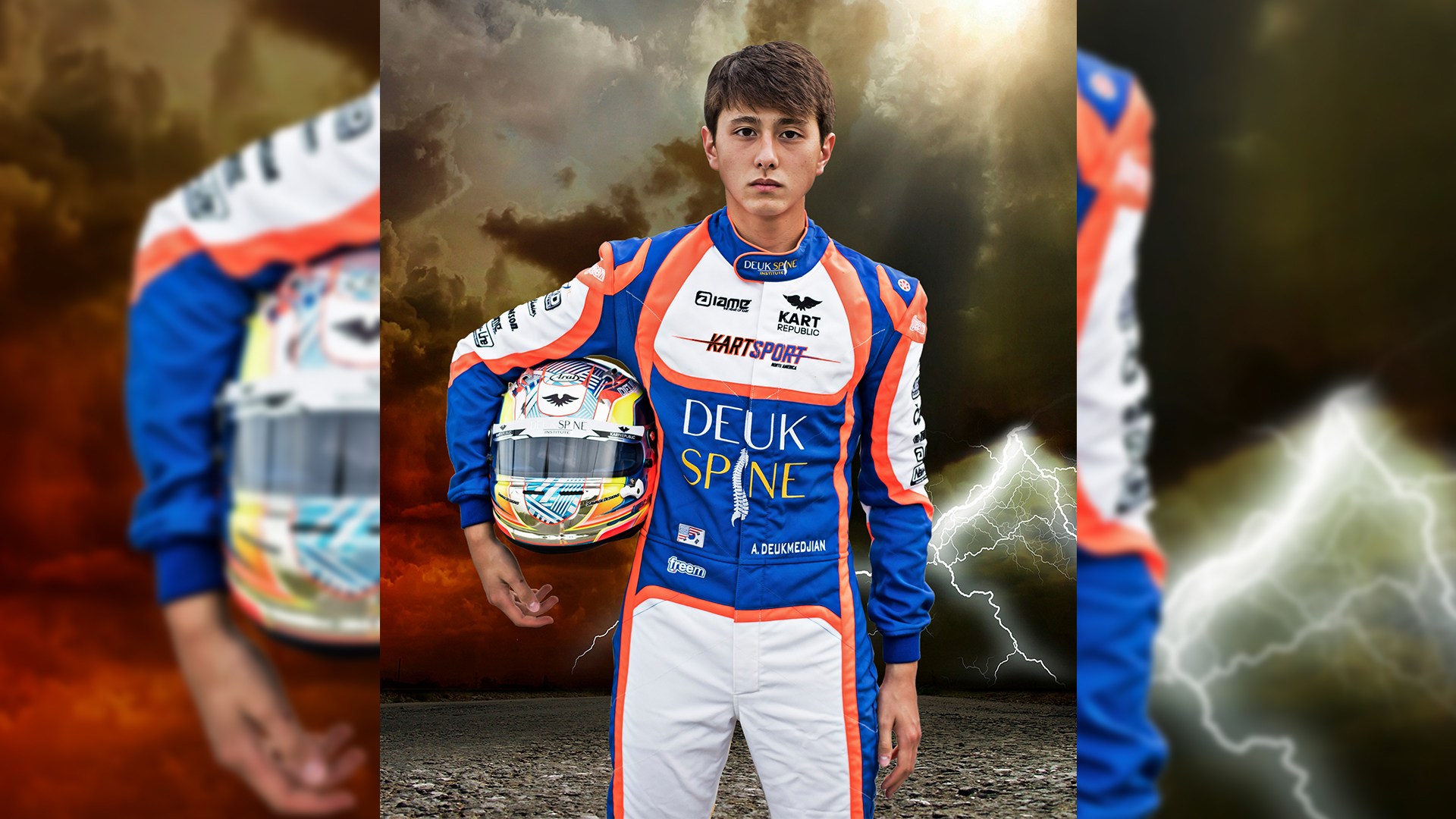 MELBOURNE, Fla. — The track is set for the final race and Arias Deukmedjian, along with 40 other drivers from around the world are steering their go karts around the final corner, all eyes on the race official to raise the green flag signaling the start of the race. Although Arias is only 15 years old, he holds the title of “national champion” having defeated drivers twice his age and experience. His 120cc engine is revving like a wild beast roaring contemptuously at its neighboring challengers. The go-karts are lined up one behind the other double-stacked into two rows as they roll up to the start line. The driver’s head in each cart barely sticks above the front fairing of the car, as they lay low to keep the maximum aerodynamic benefit.

They are given the signal and off they go! Arias is carefully studying what the karts in front of him are doing, always looking for a passing opportunity. A great driver needs more than speed to win a race. Being fast means being focused every second of the race while taking the go kart to the maximum performance on all 15 turns of each lap in the 20-lap race. Drivers must independently control the steering wheel, brake, and accelerator pedal all while tightly adhering to the “racing line” (the fastest line around a track) and accounting for ever-changing track grip. Sun, clouds, moisture, rubber, dirt, and lubricants on the racing surface all have a major impact on how the driver takes each turn and they are always changing throughout the race. The amount of information being processed by a race driver’s body and brain during a race nears that of a supercomputer. The best drivers have awesome processing power and are in exceptional physical shape.

The Karting track is where Arias feels at home. Starting at the young age of 1 driving the little motorized trucks that all kids love, was how he spent his time…all.day.long until the battery ran out and needed to be recharged. Young Arias would ride these motorized cars until the wheels had holes in them. Once that particular kid’s car wore out, his parents bought another one. Arias rode these for hours in the neighborhood and this became his love at an early age.

As he grew older, he continued to ride on toys, but ones that were even faster. At the age of 7, he was riding toys that were made for 15 year olds! He went to Orlando to test out Go Karting on the track and met Tito Zanella who became his first mechanic and coach in this new world he was about to join.

When he is not on the track, the 11th grader at Lake Highland Prep (Orlando) is taking 5 AP and 2 Honors classes, has a GPA of 4.6 and is playing the Viola at school and in the Brevard Youth Symphony Orchestra. He also excels in Latin and won the 2019 National Championship in Latin Literature that was held in South Dakota.

Arias’s schooling is different from other Karting drivers, as most of them are home schooled due to travel and practice schedules. Karting requires mental and physical endurance as it is a one-mile long course and fast! Deukmedjian stays in shape by playing soccer and running. Driving a kart requires a lot of concentration, constantly calculating the track conditions and the other driver’s movements all while operating a 4 wheeled vehicle at speeds of 85mph. Professional karting is considered to be the driving sport closest to Formula 1 based on reaction time and weight to power ratio similarities of the vehicles.

Teaming up with Deuk Spine Institute as a Brand Ambassador, he also drives on the KartSport North American team. Another sponsor of his driving is the Will Power Kart representing the famous Indy Car driver. This sport takes him all over the U.S. and the world as he travels about 6 -10 times a year participating in the most prestigious karting events. Arias will be competing in the SKUSA Pro Tour races, a points series to win the National Championship again. He practices on Friday, the day before the race, then Saturday and Sunday are race days with a qualifying heat followed by a pre final and final. He sees about 25 days a year on the track while Europeans spend about 200 days a year on the track, yet Arias is considered by all to be “the driver to beat”!

His greatest accomplishments so far are he is currently ranked number 1 in the EKN TaG Driver Ranking for Pro Series Professional Level for U.S., Canada, and Mexico for 2020. He has managed to outscore and beat out the driver from Orlando who has held the title for four years, with only one race remaining.

In July 2020, Arias also earned the KA100 Division Champion title, beating out 49 other drivers. Additionally, he was the X30 Junior champion at the SKUSA Pro Tour in which he beat out 41 other drivers. This was all in the same day, as he was 15 and able to compete in two different categories. Did we mention that Arias just turned 16 this past November and most of the competition is ages 18-30 years old and mostly men? Great accomplishments for this talented teen!

Now that he is 16, he can move up to racing Formula 4 cars and will compete in the US F4 Championship to earn super license points. Even though he moves up to a different type of car, he will continue to drive karts for conditioning and training. This type of kart is helpful with the demand that is put on the reflexes as well.

Go Karting can get very expensive with engine leases, new chassis, and the cost of running a racing team. As Arias moves into the next level of racing cars, he needs sponsors to get him there. This is a unique opportunity to sponsor an athlete to go to Formula One.

Arias will go to 12th grade next year and continue to drive cars in the U.S. and hoping to get a sponsor. His plans after graduation are to attend college at Stanford or Harvard or go to Europe and attend Cambridge or Oxford. If he goes to Europe, he can race and complete his college education. He desires to make it to Formula One as there have not been any American drivers in Formula One in 20 years.

Arias is a hard worker in the classroom and on the track. The company that is lucky enough to land a sponsorship with this young man will be getting someone who will continue to give 100% and make that company and the sport proud. We know that one day he will be racing Formula One and living out his childhood dream. We wish Arias good luck in his races, school, and career and look forward to following him in his sport. Arias can be found on Facebook, Instagram, and https://ariasdeukmedjian.com/. If you are interested in learning more about sponsorship opportunities, contact Deuk Spine Racing at (321) 593-2537.