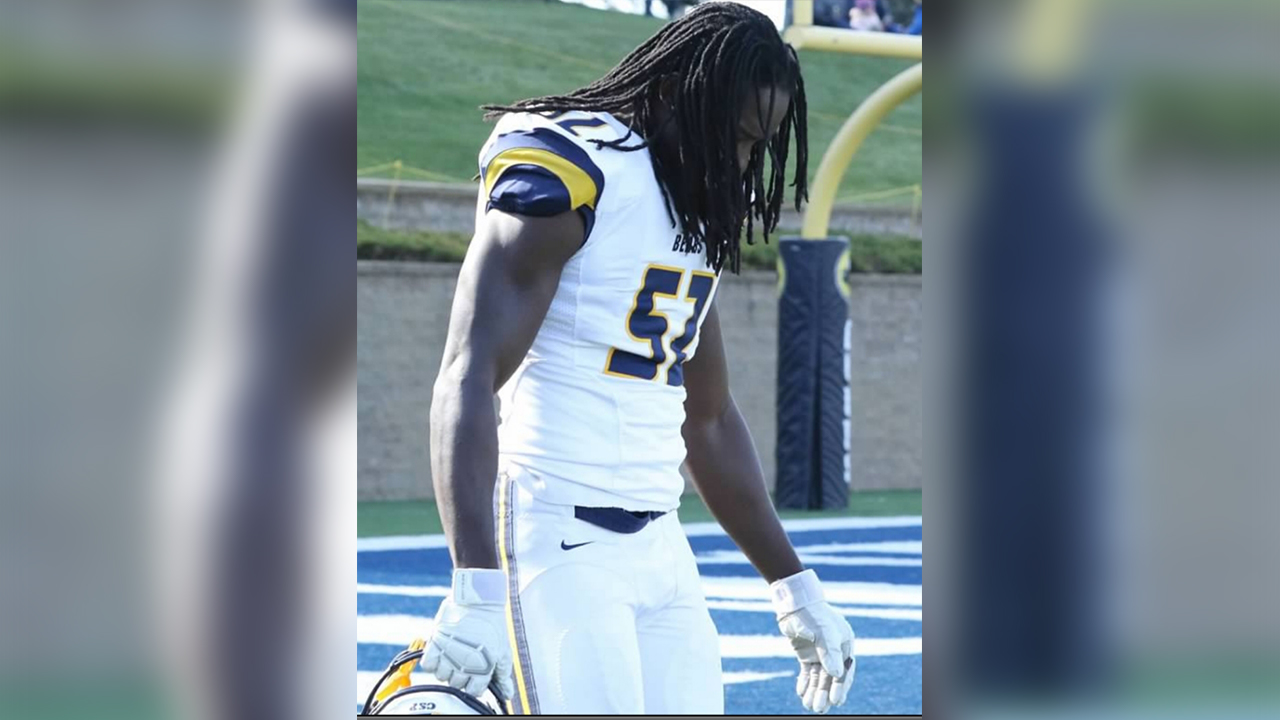 Garrett leaves the Golden Bears as one of the best players ever in program history. (Courtesy: Chris Garrett)

MILWAUKEE (BVM) — Almost four years ago as a true freshman at Concordia University St. Paul, Chris Garrett was in the D-line room when the coaches asked everyone, ‘What are your goals and what do you want to do after football?’ Garrett remembers he was one of the last to answer.

“I was one of the only ones to say, ‘I want to go to the NFL and that’s my dream for after,’” Garrett said.

What struck Garrett is there was little doubt in the room after he made those remarks as a freshman at an NCAA DII football program.

“There wasn’t much doubt I could do it,” Garrett said.

Fast forward to the present and the 6-foot-4, 240-pound Garrett is doing exactly what he said he would.

Only two months from the 2021 NFL Draft, Garrett is one of the top prospects out of DII and is one of the best pass rushers in the country regardless of collegiate level. He is projected to go in one of the later rounds of the draft.

Over his three seasons at CSP, Garrett recorded 36.5 sacks which ranks 13th most all-time in Division II history, first in Golden Bears history and second for the Northern Sun Intercollegiate Conference (NSIC).  He also had 166 total tackles, 48.5 tackles for loss and 18 quarterback hits. His 15 career forced fumbles is a DII record and he ranks third all-time in sacks per game with 1.30.

“When he played you could sense he was going to be something special,” CSP head coach Shannon Currier said of his two time All-American. “He was just somebody every offense had to be concerned about and made other players better.”

Garrett’s road to becoming that dominant force was one a long one. Paved with hard work and a confidence that is built on a strong foundation of faith.

“God has always put people in my life to help me grow and that benefit me,” Garrett said. “That faith that my grandma instilled in me since a young age has definitely helped bring me to the point that I’m at now.”

That faith guided him through his time at Wisconsin Lutheran High School and steered him toward Concordia.

“Chris wanted to go someplace where he could make a difference, change the culture and be a spiritual leader,” Currier said.

Originally, Garrett had dreamed of playing for the University of Wisconsin as a Badger after visiting the program on a junior day visit. He was working to improve his grades and was receiving interest from other DI schools but the talks soon went from scholarship to walk-on.

It was a week before signing day when he began to hear from some Division II schools, prior to that his high school coach had been turning them away. Winona State, Minnesota State – Mankato, University of Sioux Falls and CSP all were interested in Garrett.

Concordia stood out and Currier presented Garrett with a great opportunity.

“He just let me know, ‘You could be a part of changing the program and be a part of something special. I just became the coach and you guys would be my first official class,’” Garrett said. “So I was like, ‘All right, let’s do this.’”

Once at Concordia, Garrett got to work achieving the goal he had talked about in the D-line room.

“I just knew I had to dig a little deeper because I wouldn’t be getting everything that I would be getting from a Division I school,” Garrett said. “I knew there would be a lot less given to me and a lot more being intentional, staying after practice, coming before practice, working out Friday nights when everybody else is going out and just crazy stuff you don’t even think about I was doing just to get better at football.”

“He has a strong desire to be great,” Currier said.

A desire that was motivated first and foremost by family.

“First would have to be my family,” Garrett said. “Everything that I’ve been through with my mom and my dad. Watching my grandma work so hard to get me to the point that I’m at now and the point I was at in college knowing that I had the opportunity later on in life to help my grandma out.”

His grandmother built his faith, played a huge role in raising him and even when he was in St. Paul would always send money to Garrett even when she didn’t necessarily have it. But it wasn’t just her it was his future family too.

Growing up poor in Milwaukee and knowing what he went through has pushed him to provide for his future kids so that they don’t have to go through the same thing.

Garrett with his work ethic and goals was finding success out on the field. Including one game against Augustana (South Dakota) in which he had three sacks, three and a half tackles for loss and forced three fumbles. But the team was still struggling.

Coming from a Wisconsin Lutheran program that went 29-8 over the three seasons he was on the team and went undefeated on their way to a state championship as junior, Concordia was different.

“At Wisconsin Lutheran it was a winning culture. … There were just things you didn’t do,” Garrett said. “Then going to Concordia it was like, ‘What in the world?’”

It was a losing team with a losing culture. Players were not holding each other accountable, leaving everything to the coaches. Garrett even kept a notebook, writing down things he wanted to remember from his time in high school to make sure he carried on like he was in a winning culture.

Garrett planned on being a part of the change and using his freshman year to build a rapport with his teammates to begin the culture change Currier had talked about when he was recruiting Garrett. However, Garrett’s ascension to a leadership role on the team would come much sooner than his sophomore year.

“God allowed me to come in, to play, to get their trust by getting three sacks in one game one time and then just disrupting the quarterback a lot that year,” Garrett said. “By the end of my freshman year it was like I was able to take on that role like, ‘Guys what are we doing? Why are we going through practice like it’s a walkthrough?’ and I was able to speak up like that and call things out. Then I was able to get other people on board and that’s when things started to role.”

“I’ve never seen somebody inspire as many people as he did,” Currier said.

Garrett quickly became a leader both on and off the field. Off the field Garrett led a Bible study group, helping build the foundation of faith his grandmother had built in him in other people. His teammates would also come to him as someone to talk to about anything.

On the field, as Garrett became better, so did the rest of the team as they tried to keep up with him as he took his game to a whole other level between his freshman and sophomore year.

“My freshman year it was just about getting on the field and not really knowing what I was doing at all,” Garrett said.

But it was the film from that season that allowed Garrett to grow into a two time All-American and one of the best pass rushers in the history of Concordia and DII football.

“I had something to base it off of,” Garrett said. Like, ‘OK here’s what I need to improve on, here’s what opponents did against me, this is how I’m going to counter that. OK my speeds good I think that’s a go to let’s do that speed to power a little bit more.’”

His speed was more than good. It is elite. Added with his skills he has honed at Concordia is the reason that NFL scouts are interested in him. At the Hula Bowl in January, he showcased that speed against other NFL draft prospects and played well even though it had been his first game in almost a year due to COVID-19.

Interviewed him in November. Name to watch for 2021 draft.

“To see that I belonged there,” Garrett said. “I think I proved that.”

Garrett isn’t done proving his ability either. Since his decision to enter the 2021 draft, he has been working out at NX Level in the Milwaukee area getting ready for his pro day. Garrett says it’s like he has a whole new body and he wants to show it off.

“I think my numbers are going to really shock some people,” Garrett said. “I’m trying to get a 4.5 and I think that I can get that high 4.5 number. I think if I can get that and show them how good I move, I think for me I feel like there’s no question I will get drafted.”

But more than his speed off the ball and knack for terrorizing quarterbacks, it is Garrett’s character that many believe will put him over the edge.

No matter the obstacle, no matter the circumstances, Garrett has thrived on and off the field and has made those around him better. His work ethic, faith and desire to excel has put in a position to once again make change, only this time it will be for an NFL team.