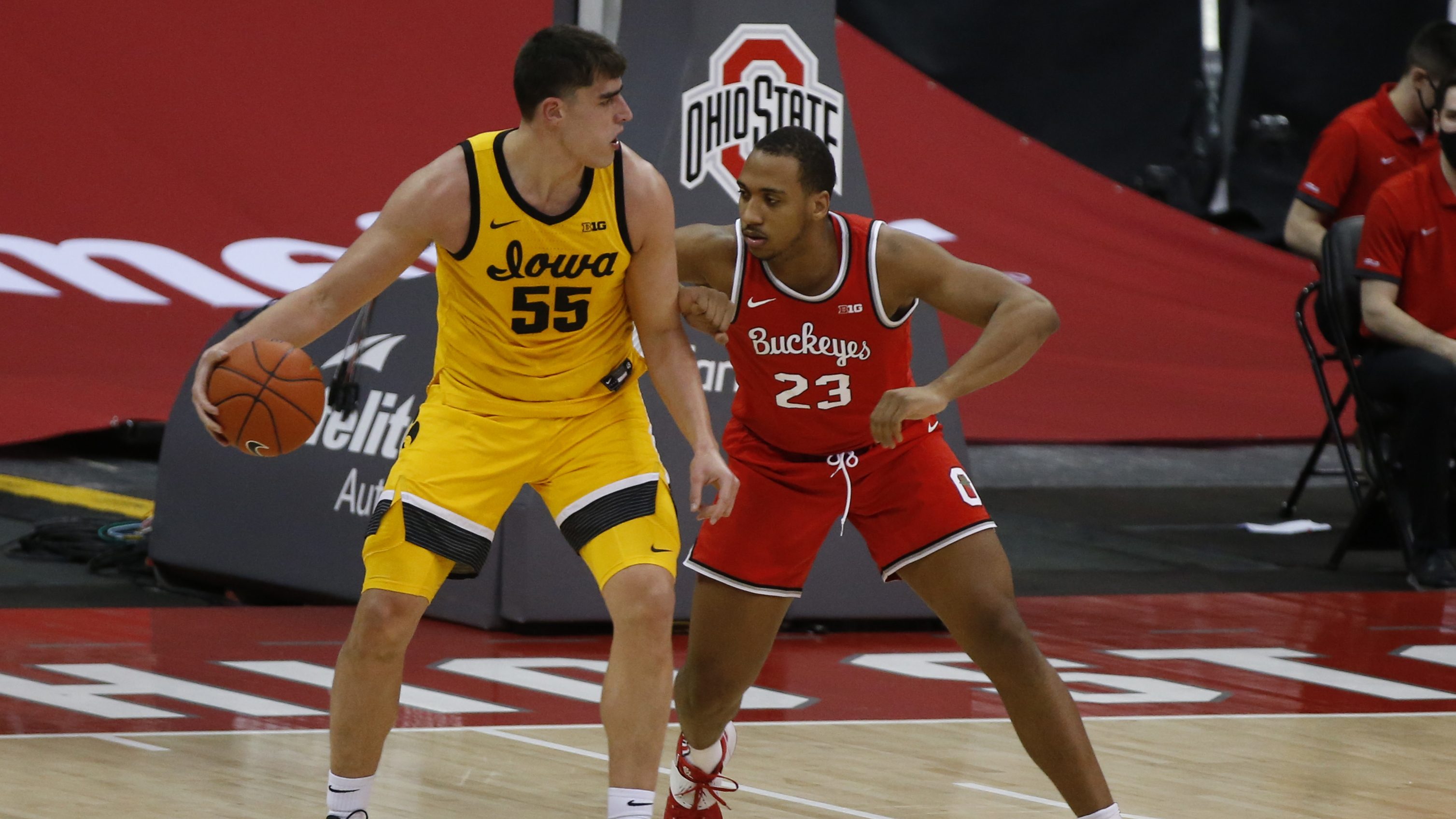 COLUMBUS, Ohio (AP) — Luka Garza rushed through a national TV interview after No. 9 Iowa routed No. 4 Ohio State on Sunday because he couldn’t wait to start celebrating with teammates in the locker room.

“They waited on me, and we had a little celebration,” Garza said after scoring 24 points and pulling down 10 rebounds in Iowa’s 73-57 win over the Buckeyes. “It’s a huge win for our group, to be able to beat a team like that on their home floor. It’s impressive for us, and it’s huge going forward, especially with seeding in the Big Ten tournament and the NCAA Tournament.”

Joe Weiskamp added 19 points — including 5-for-9 shooting from 3-point range — for the Hawkeyes (18-7, 12-6 Big Ten), who have won five of six with two games remaining in their regular season.

“We’re an experienced group, we’re a resilient group,” Garza said. “And we know, we’ve had confidence all year that we can hang with the best of the best, and we know we can beat them. Unfortunately, we’ve had a couple performances that didn’t reflect how we good we are against those teams.”

E.J. Liddell had 15 points and Justice Sueing scored 10 for the Buckeyes (18-7, 12-7). Recently projected as a No. 1 NCAA Tournament seed, they’ve lost three games in eight days.

After Liddell hit a jumper to open the game, the Buckeyes never led again.

The Buckeyes mounted a 14-2 run to open the second half and got back within two with 16:49 left. But a 3-pointer from Weiskamp and a couple of baskets in the paint by Garza got the Hawkeyes out of the danger zone and Ohio State couldn’t chip away.

“They clearly outplayed us, outperformed us, outcoached us,” Ohio State coach Chris Holtmann said. “We’ve got to get back to work.”

Iowa: The resilient Hawkeyes took it to Ohio State and will try to finish strong with the conference tournament looming.

“We know we just have to keep doing what we’re doing and control the things that we can control — our effort on the defensive end and our ability to move the ball offensively,” Garza said. “When we do that, good things happen.”

Ohio State: After losing to No. 3 Michigan at home on Feb. 21, the Buckeyes lost to unranked but surging Michigan State on Thursday because they couldn’t hit shots late. They were dominated by Iowa and are sure to drop in the AP Top 25.

After grappling with 7-foor-1 Michigan center Hunter Dickinson in the setback in Ann Arbor on Thursday, the 6-foot-11 Garza had no peer in the paint against Ohio State, whose forwards top out at 6-7 and 6-8. He scored from everywhere, picking up his 11th double-double of the season.

“We couldn’t do much,” Holtmann said. “We weren’t able to take away his strengths when we were playing him one on one.”

Iowa redshirt sophomore Jack Nunge was out after suffering a season-ending knee injury in Thursday’s loss to Michigan. The 6-foot-11 Nunge was the team’s leading scorer (7.1) and rebounder (5.3) off the bench. An injury to the same knee in November 2019 ended last season early for him.

Ohio State F Kyle Young returned to the lineup after sitting out Thursday’s loss at Michigan State with a concussion suffered when he bumped heads with an opposing player in the Michigan game. He had three points and five rebounds Sunday.

Ohio State: Finishes the regular season against No. 5 Illinois at home on Saturday.