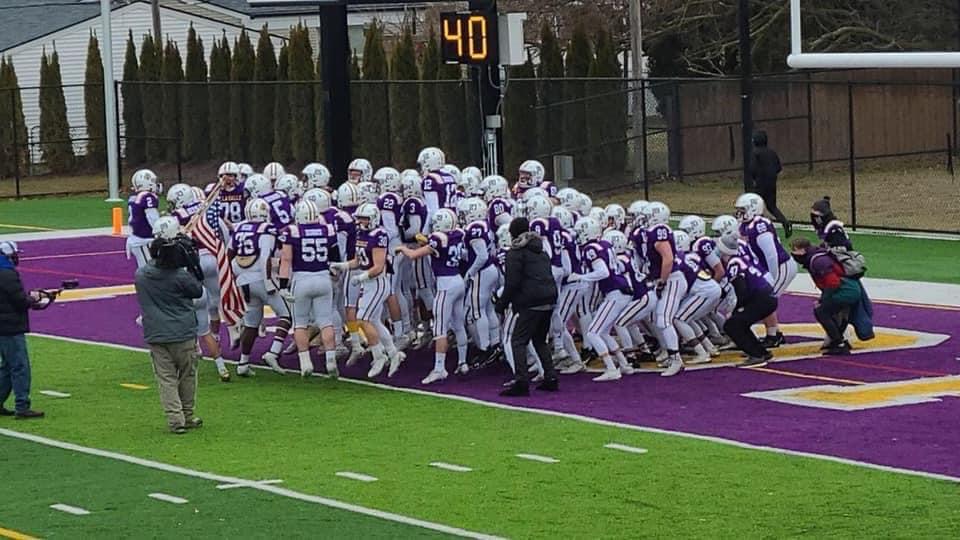 Although they didn‘t finish the year with a state title, the Warren De La Salle football program fought through adversity to have an impressive season. (Courtesy: Dan Rohn)

WARREN, Mich. (BVM) — The past year or so hasn’t always been a great one for the De La Salle Collegiate High School football program. But what the Pilots have done over the last couple months, both on and off the field, has everyone looking at brighter days ahead.

Recently, De La Salle has been a powerhouse program in the state of Michigan, as the Pilots claimed state titles in both 2017 and 2018. But after a hazing scandal kept the team from competing in the 2019 playoffs, everything changed.

But a dark time quickly turned into a bright one, beginning with the hiring of current head football coach Dan Rohn one year ago. Rohn brought over a lot of experience to the program, as he became a coach at just 25 years old after playing in college at Grand Valley State.

After initially coaching at Fremont High School, Rohn took the head job at Grand Rapids West Catholic where he led the football program to four state titles and a 99-17 record during his time there.

Rohn quickly moved up to the college ranks as an assistant coach at Ferris State University. But he knew he wanted to get back to the high school level someday, and began talking with De La Salle.

“I knew I wanted to work with high school kids again so I took a little bit of time and looked around for the right job,” Rohn said. “De La Salle came open under some different circumstances but I ended up accepting the job in early March. To me, De La Salle should be one of the top programs in not only Michigan but the entire Midwest. When I interviewed here, it felt right to me right away.”

Already facing a challenge, things became even more difficult for Rohn and the program when Covid shut sports down just a couple weeks after he was hired. But, the Pilots would still put in the work in the offseason to get ready for the fall.

Then, more adversity struck as the fall high school football season was delayed in Michigan, and later reduced to a six-game regular season schedule.

“They closed the schools down in March and nobody could work out or develop relationships or get going,” Rohn said. “In June when we started, there were still a lot of changes that made football more difficult and took away some of the fun. But we did start getting going a little bit and really thought we were turning the corner with some good camps in June and July. Then we got into August and we got shut down again. It was tough, we didn’t really know how to handle it.”

After a few weeks off, the regular season would finally begin in mid-September. However, the Pilots would struggle through their six games, going just 2-4. With the uniqueness of the season though, the MHSAA allowed all teams to make the playoffs, giving De La Salle a chance to make a postseason run.

“We probably went through one of the toughest schedules in Michigan and had our lumps during the regular season,” Rohn said. “But we got into the playoffs and we started turning the corner.”

De La Salle began finding its footing at the right time, winning its first three playoff games while averaging around 40 points per contest offensively. But then, perhaps the worst case scenario occurred, as the MHSAA halted sports once again due to Covid concerns within Michigan.

The pause in fall sports would last 56 days, creating more tough times for those teams still competing. However, the Pilots remained focused and ready throughout.

“I thought the kids were really focused as was the coaching staff,” Rohn said. “We thought that shutdown would only be a few weeks and it dragged out a little bit. But we were excited with where we were.”

By the time the shutdown ended in January, the Pilots needed to win their matchup versus Oak Park to get to a state championship game, and they did just that in a close overtime victory. After a 2-4 regular season, De La Salle had remarkably made it back to state. But the opponent waiting for them would be a very familiar one: Mona Shores.

The Sailors came into the Division 2 state championship game at 11-0 and with one of the top quarterbacks in the state of Michigan on their side in Brady Rose. The matchup continued a budding rivalry between De La Salle and Mona Shores, as the two teams met in both the 2014 and 2018 state championship games as well — both won by the Pilots.

Being from the Muskegon, Mich. area, Rohn was very familiar with how good the Mona Shores program is. He knew things would need to go right for De La Salle to pull off the upset, and if a couple missed big plays would have been made, the Pilots would have certainly had a chance.

Although De La Salle hung tough, it was finally the year for Mona Shores to claim a state title as they won the matchup 25-19.

“I think we threw everything we had at them,” Rohn said. “But they were a great football team. You never want to lose and it was tough and it hurt, but our kids battled to the end and I was proud of them. I don’t think it’s the last time we will step on Ford Field to play for a championship.”

While it was a tough loss and will be the seniors’ last time stepping on the field, there was nothing to be ashamed of for the effort put forth throughout the entire season by the De La Salle players.

“It was a tough road for those kids,” Rohn said specifically about the Pilots’ senior class. “They went through a lot over the last 14 months and those guys did an amazing job of putting the program on their back. I couldn’t appreciate their effort and commitment more, it meant a lot.”

Rohn specifically mentioned guys like running back Brett Stanley and safety and receiver Tyler Gerling as true leaders for his team on and off the field.

The Pilots did an impressive job of facing their adversity this season, but they were not the only ones to encounter difficulties. While the season on the field was mostly smooth sailing for Mona Shores this year, off the field, one of its players has faced a true challenge.

Devin Gibbs is a senior football player for Mona Shores. While many athletes in the past year have had their seasons altered by the pandemic, Gibbs had his changed by something even more serious. In September, the senior was diagnosed with acute myeloid leukemia.

Gibbs has made strides since, but still missed out on his senior season and getting to be on Ford Field with his teammates to celebrate the state championship victory. Rightfully, Gibbs’ story has not gone unnoticed, and was recognized by a De La Salle team parent.

Wanting to do something to help him out, the De La Salle football community sent Gibbs a card signed by every player on the Pilots’ team, a note and a $200 gift card.

For Rohn and this Pilots’ group, it was the least they could do for a rival team member going through something none of us ever want to think of.

“Finding a way to put a smile on somebody’s face during these times is difficult enough, and then you take somebody that is dealing with the type of situations and adversity Devin has been dealing with, and not many of us have walked that walk,” Rohn said. “It meant a lot that our parents and our kids wanted to do something.”

In a day in age where high school sports have become as competitive as ever, the touching move De La Salle made can serve as a great lesson for anyone about sports going beyond just competition.

“Hopefully, we were a bright spot and a moment for Devin and an opportunity for him to smile. Hopefully we gave him some support through this and he can continue to recover through it fully. I’m hoping our paths cross someday and am just appreciative our kids were able to do something for him.”

It is clear the De La Salle football program is now in good hands. It was impressive what Rohn and the Pilots were able to accomplish in an adversity filled season. And if they couldn’t win a state title, what they did for Devin Gibbs — who we all wish the best and a speedy recovery to — is maybe just the next best thing.