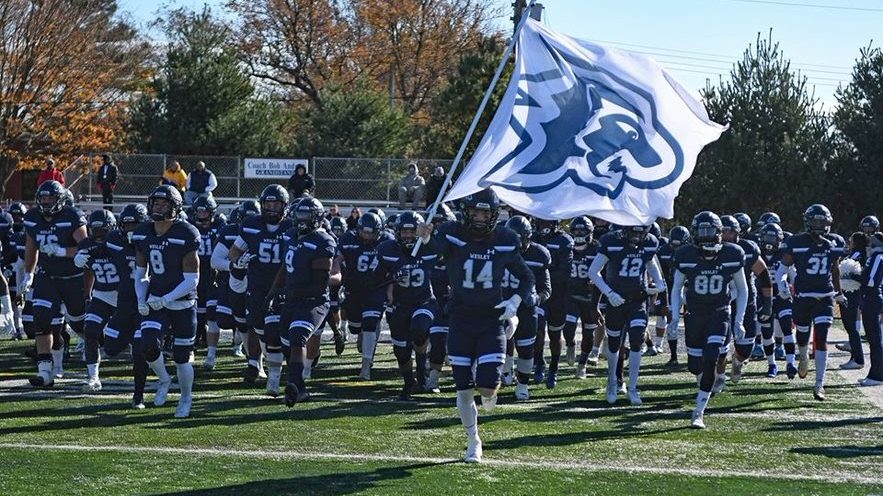 Following Delaware State University’s purchase of Wesley College, the school will no longer provide athletics programs making the shortened spring football season a finale for one of the college’s most successful programs. (Courtesy: Wesley Athletics)

DOVER, Del. (BVM) — A spring football season was going to be difficult for the Wesley College Wolverines regardless of any other off-the-field issues. However, with the announcement by Wesley College President Robert Clark that the Delaware State University Leadership decided not to continue the Division III athletic program at Wesley following the university’s acquisition of the school in July of last year and plan to integrate the school into the DSU community this July, it has gotten even harder.

The news came as a shock to many, even the college’s president.

“When the decision came, heartbroken and dismayed is an understatement,” Clark said. “I don’t have the answers. It doesn’t necessarily make sense to me.”

Clark added that Wesley College will help student-athletes, which makes up roughly 40% of the undergraduate population according to the president, and athletics staff members with their transition either to DSU or elsewhere, fully supporting their endeavors for the future.

“As soon as the decision was made, my focus was laser on my coaches, my administrators, my student-athletes to make sure that we could provide the best experience this year and also ensure the student-athletes transition to a place that benefits from their talents, but more importantly they benefit educationally,” Clark said.

For Delaware State, the university said it made all efforts to continue the program, hosting privately funded investigations into the possibility of maintaining two athletics programs, but found that it was not in the best interest of the school’s goal to provide affordable higher-education for community members.

“We recognize the deep disappointment that the Wesley College community is feeling after that announcement,” DSU President Dr. Tony Allen said in a statement released to the Delaware State and Wesley College communities. “It was not an easy decision. Wesley College athletes and coaches across the board have carved out a proud tradition in DIII sports, and we made every effort to consider its long-term sustainability.”

In the middle of all this is the Wolverines football program. With the New Jersey Athletic Conference’s recent decision to play a spring football season this year, it will mark the final time the Wolverines team takes the field. As one of the most successful sports programs in the school since the university joined the Division III level in the 1980s, the unique spring season will be a fitting sendoff for a team that has meant so much to a campus community.

“We talked about this being a possibility,” head football coach Chip Knapp said. “I likened it to having a terminally ill family member where you’re kind of hoping for a miracle cure and you’re waiting and it just never comes. It’s like a family member passed away. It was a very somber kind of serious mood when we announced it to the team.”

Over their roughly 40 years at the Division III level, the Wolverines had a number of national successes including making the national semifinal game six times and having two former players win the Gagliardi Trophy, given to the Division III national player of the year. The team has also produced a pair of NFL players including current Atlanta Falcon Matt Gono.

Former head coach Mike Drass, who died unexpectedly in 2018, led the Wolverines for 25 years which included the program’s six most successful teams. His name now adorns the team’s football stadium, which will host the program’s final home game on March 13 against Salisbury. For Knapp, who has been a part of the football program for over 30 years as both an assistant coach under Drass as well as taking over the program following his passing, the season will be filled with emotion.

“Well for me, I’ve been here since 1989, and obviously this program has been a big part of my life and it’s been a great experience and I wouldn’t trade it for anything,” Knapp said. “I will probably go through the grieving processes of losing something close to you once I get time to sit back and think about it. As we move forward, I will look to preserve whatever I can in terms of this program. Preserve the memories.”

While there was a discussion as to whether the team would even want to participate in the spring season, when Knapp left the decision up to the players, they were fully invested into one last ride as a program. For Knapp, the shortened season is about more than just a return to the field, but about honoring those who paved the way for the program in the years before.

“The team all showed up and they had a great attitude and we’re moving forward with that,” Knapp said. “We’re in football mode and the guys are thinking about how to show off what they can do on the football field and they have a little bit of pressure to keep up the winning tradition we have here and doing it for all those players that came before them.”

In all, the Wolverines will play three official games, all in March, during the campaign as well as a scrimmage against Montclair State to begin the year on March 6. With only a few games left in program history, the Wolverines will look to leave it all out on the field for those who supported them over their history.

“We want to represent those who have come before us well,” Knapp said. “It’s going to be an emotional thing. It will definitely hit us and hit me after. It’s still hard to believe that it’s going away and it’s going to take a long time to get over it. It’s going to be tough.”

Clark is proud of his school’s athletic community as they stare down the barrel of what will be the end of their college’s programs. Though it will be a difficult time for all involved, Clark said he sees a passion in his student-athletes to end the school’s program in success.

“Even in this pandemic and even after the announcement that this is it for Wesley College, these young men and these young women their laser focus is that we’re going out on top,” Clark said. “If this is going to close the chapter, it’s going to close the chapter of a book that is lined with a legacy of a winning tradition. A never give in attitude. A never say die attitude. I am so proud of them for showing up and moving forward with that.”

Though disappointed in the loss of athletics, Clark recognizes the deal will benefit both schools in the long run and sees a bright future for both.

“[This acquisition] is something that absolutely expands the opportunities that will be provided to the state and region,” Clark said. “Having Wesley College here, now part of Delaware State University. You have the best of multiple worlds. So opportunities will open for the state and the region and it’s a great new story.”

According to DSU, the Wesley campus will become the new Wesley College of Health and Behavioral Sciences in downtown Dover to honor the history of the school. Clark said the university could even take the honoring of the athletics department a step further, continuing traditions such as homecomings, a hall of fame and athletic celebrations into the future for the next generations to enjoy, keeping the spirit of Wesley College athletics alive long after they’re gone.

“Tradition and legacy never dies and we’re not going to let it die here,” Clark said. “We know [Delaware State] and they know us and they’re committed to that legacy. … I don’t look at this as much as a closure, but as a reemergence. Some will say it is a closure because athletics won’t be on the field and that is correct, but there are generations and generations of alumni who participate in athletics and have been touched by it and formed by it and that will go into the future.”