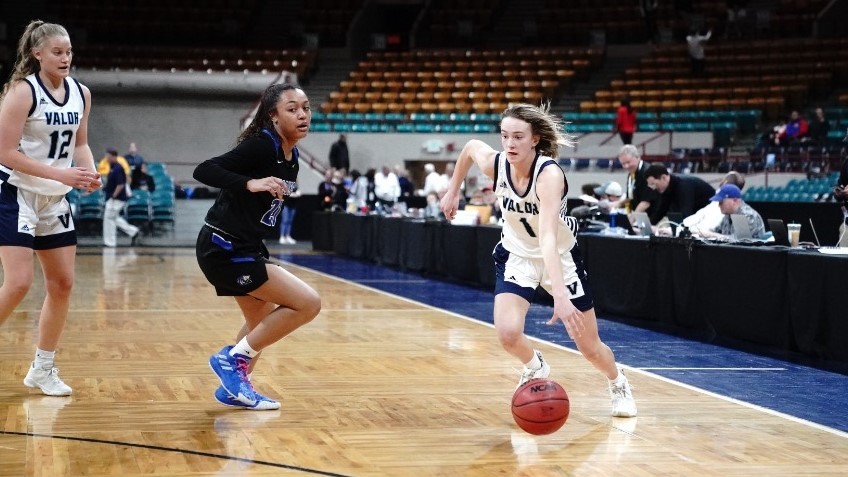 Kindyll Wetta (1) has been one of Valor Christian’s top players all four years of her varsity career and is a key part of a veteran-led team which has its sights set on a deep state tournament run. (Credit: Paige Stingley)

HIGHLANDS RANCH, Colo. (BVM) — The Valor Christian Eagles haven’t made it back to the state championship since 2016 when they captured their second consecutive Class 4A state title, but the girls basketball program has been on an upward trajectory ever since its seniors began attending the high school four years ago.

The 2017-18 season was Valor’s final one in Class 4A and it ended in the Sweet 16 of the state tournament. The Eagles moved up to 5A for the following season and made it all the way to the Great Eight. Last year, Valor reached the 5A Final Four where Grandview ended its postseason run for the second straight year. Now with one state tournament remaining for those seniors, there’s only one more step up to take for the Eagles to reach the title game again — but for the first time in Colorado’s biggest class.

“I think for them this is that culmination year,” Valor head coach Jessika Caldwell said. “They’ve been kind of a part of that shift to bumping up a notch in level of play, playing teams with lots of students in their population compared to ours. It’s been really amazing to watch them kind of continue to take those next steps to make us a viable program in 5A in Colorado.”

Leadership and experience are unquestionably big strengths for the undefeated, No. 2-ranked Eagles (13-0) this season with seven seniors on the team, but depth and balance might be equally as important to Valor’s success. While there are no stars on the roster, there is no shortage of players who can make significant contributions on the scoreboard on any given night. Eight players score between 5.0 and 12.8 points per game.

“I think that’s what makes us really potent is that there are a lot of scoring options,” Caldwell said. “I think that depth is going to help us as we make our playoff push.”

That playoff push begins next week, just six weeks after the regular season began. The CHSAA was forced to push back and shorten the season due to the Covid-19 pandemic, creating a unique situation for Valor and every other Colorado basketball team. Usually, they would have a full preseason and several months of games before the postseason arrives.

“Typically at this point you would be hoping that you’d be in midseason form and I feel like we’re in midseason form but we’re going into the playoffs, so that’s a little bit different of a feeling,” Caldwell said. “I feel like without the opportunity to practice a lot because we’re playing so many games in a week, just some of the little things that I would expect to see at this point of the season, in early March, we’re not quite there yet but I’m hoping that we can continue to progress as we go.”

Fortunately for Caldwell, she has a veteran-led group of players to count on as the Eagles try to make their march through the state tournament and back into the title game. While several teams stand in Eagles’ way in the field of 32, there’s only one team currently ranked ahead of them in Class 5A and it’s an all-too-familiar foe: Grandview.

The 13-0 Wolves are no stranger to championship games, having reached the state final each of the past four years. They won back-to-back 5A titles in 2017 and 2018 and were the runner-up to Cherry Creek in 2019. After beating Valor in the state semifinals last year, Grandview was set for a title game rematch with the defending champion Bruins before the Covid-19 outbreak brought an end to the tournament. Led by 6-foot-7 Stanford commit Lauren Betts, the nation’s top-ranked recruit in the Class of 2022, the Wolves are favored to win their third state title in five years.

Betts presents a tough matchup for any team, including the Eagles, who are missing their top post presence from a year ago in 6-foot-3 junior Raegan Beers, who tore her ACL in May. But Valor isn’t going to shy away from the challenge that Betts and Grandview brings. The senior-led Eagles are determined in their quest for their first Class 5A state title.

“I think that’s definitely their goal,” Caldwell said. “Losing that big presence against potentially a 6-7 post player makes me a little bit nervous, but I think what’s really different this year is that we can really stretch the floor and we can really shoot the 3. We’ve lost to Grandview two straight years and I think our team is definitely on a mission.”