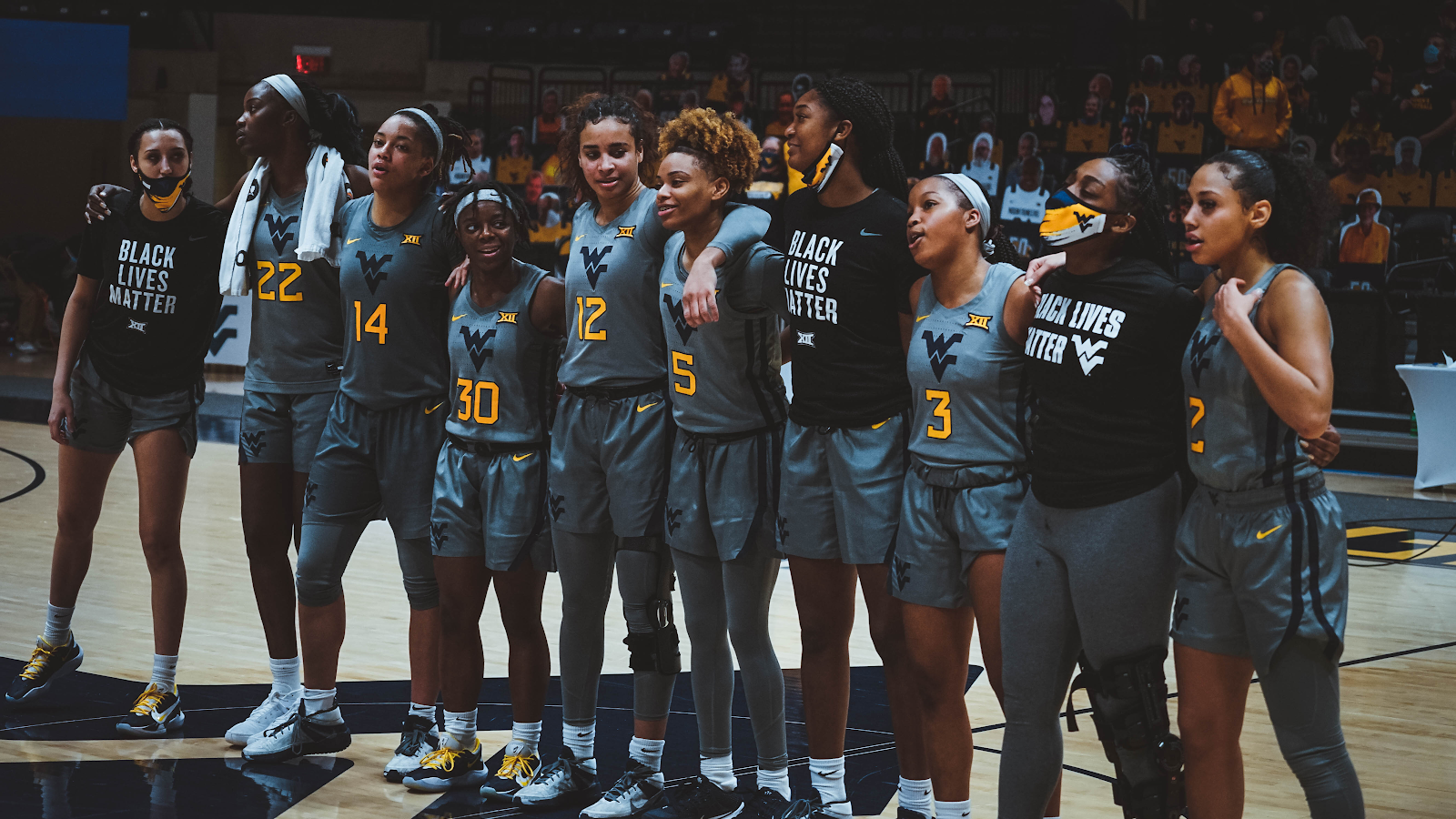 The West Virginia players gather at midcourt to celebrate a victory over Iowa State at the beginning of February (Courtesy: Jack Tolman/ WVU Athletics Communications)

MORGANTOWN, W. Va. (BVM) — Coming into the 2020-21 season there were many questions surrounding the West Virginia women’s basketball team. The team lost its second leading scorer, a significant blow to a program that was already short on supplemental pieces especially on the offensive end. Additionally the sting of a poor finish to the previous campaign created a negative stigma around West Virginia’s ability to compete in an always tough Big 12 conference. However the current version of the Mountaineers are determined to cast aside the doubts clouding their program by maintaining the early season success that they experienced in December and January.

West Virginia currently sits at 19-4 and 13-4 in conference play buoyed by an 11-game win streak that stretched from before Christmas until the middle of February. After losing seven out of ten to close last year’s season, WVU has persisted in their efforts winning three of four since having their win streak snapped. The Mountaineers have been rewarded with the No. 20 spot in the latest AP Poll despite not being ranked preseason and a projected No. 4 seed in the NCAA Tournament later this month.

As to whether the players on the team have noticed the potential outlook of their postseason play, head coach Mike Carey said his players are up to date on the situation.

“They’re aware,” Carey stated. “I tell them right now everybody at the end of the year is trying to play for seeding. Whether it be Big 12 Tournament, whether it be NCAA or whatever so everybody’s playing a little harder right now.”

The last two seasons cannot be more of a contrast in terms of West Virginia’s postseason prospects going into the first week of March. In 2019-20 the Mountaineers were fighting just to be in the conversation for an NCAA Tournament bid and the argument could be made that this team would have missed out on the ‘big dance’ if it had been played last season. Fast forward to the current season and this team has the inside track to a top two finish in a major conference as well as a high seed in the NCAA Tournament. A sentiment that Carey relishes in as he looks towards postseason play.

“It’s a different situation this year. I’ll be honest with you. We can go 1-1 the next two games or 0-2 we’re gonna finish second or third in the Big 12 and seeding wise in the NCAA it’ll affect that some,” the coach commented. “We’re looking big picture really to the Big 12 Tournament and the NCAA right now.”

One of the major differences between the 2019-20 Mountaineers and this year’s squad is their ability to win close games as opposed to losing them. This season, West Virginia is 5-2 in games decided by six points or less as opposed to last season when the team lost six contests decided by that same margin. A proposition Mike Carey credits to a change in the mindset of the players.

“I think we execute a little bit better in a late game situation this year than what we did last year on both ends,” he said. “I think our mentality is different than it was last year. This year we expect to win those games, last year I think some of them expected to lose those games.”

The 21-year head coach also voiced his frustration when discussing how his Mountaineer team is not getting the respect nationally that he thinks they deserve.

“I said this in the beginning when you’re not mentioned preseason it’s hard to get in there,” said Carey when discussing the AP Poll. “Once you get in there as soon as you lose a game they drop you. Those polls don’t win games and you got to go out and win games.”

While the lack of respect is on the coach’s mind, Carey made it clear that it is not the team’s final concern.

“That is not our focus, the polls. It’s just frustrating once in a while to me,” Carey reiterated, “We just got to take care of business and win games and then all that takes care of itself.”