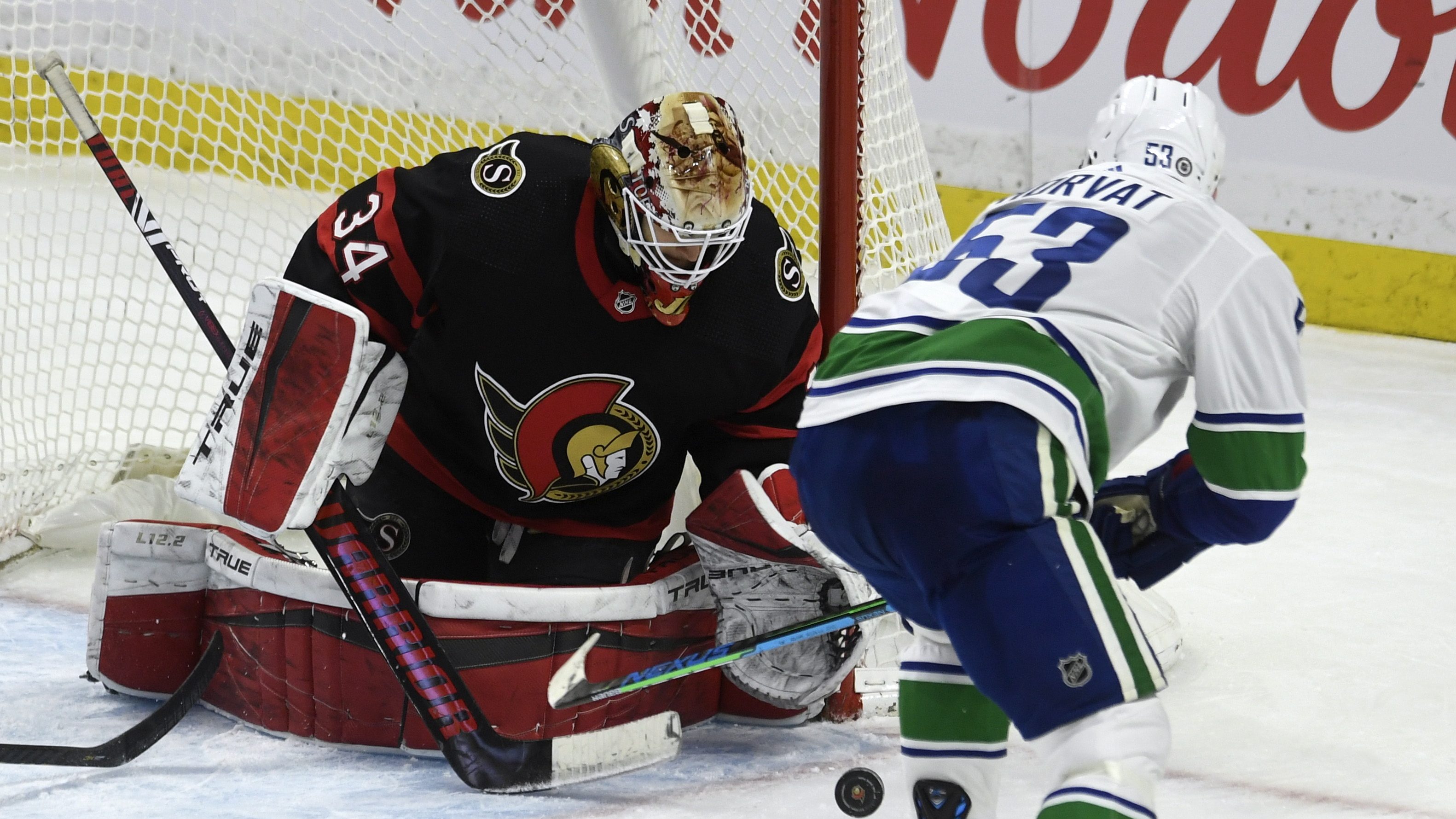 Miller beat a defenseman and then deked Joey Daccord before scoring the winner 1:40 into overtime.

Jayce Hawryluk and Tanner Pearson scored in regulation for Vancouver.

White, whose errant pass led to Vancouver’s second goal, tied the game at 2-all with 2:10 remaining, sending a one-timer from the slot into an empty Ottawa net empty.

The Senators, playing their second game in as many nights, had their chances — often helped by some sloppy Canucks play. But their power play fizzled on four opportunities during regulation.

Ottawa outshot Vancouver 18-9 in the first period and hit the post twice, heading to the dressing room trailing 2-0.

The Canucks, kicking off a four-game road trip, arrived having won four of their last five, including a 2-1 victory over the visiting Oilers on Saturday. Vancouver won the previous three meetings with Ottawa this season, outscoring the Senators by a combined 16-3 in the January series.

Ottawa was coming off a 4-3 win Sunday over visiting Toronto. But it had lost five of its previous seven, including three straight in Edmonton.

Daccord started in the Ottawa goal for the second straight game in place of No. 1 Matt Murray, who suffered an upper-body injury in the warmup prior to Sunday’s game against Toronto.

The 24-year-old Daccord, a seventh-round draft pick out of Arizona State, posted his first career NHL win with a 33-save performance as Ottawa held on to edge the Leafs 4-3. He was good again Monday.

The Senators recalled goaltender Filip Gustavsson from the AHL’s Belleville Senators as backup. Goaltender Marcus Hogberg, the normal No. 2, is on the injured reserve list.

The Canucks had their own injury problems. Elias Pettersson, Tyler Motte, Antoine Roussel and Jay Beagle all missed Monday’s game.

Demko, who has been outstanding of late, started in goal for the Canucks for the sixth straight game and ninth in the last 10.

Miller hit the post four minutes into the game on Vancouver’s first shot on net after a giveaway by Ottawa defenseman Thomas Chabot. At the other end, Sens rookie Tim Stutzle unsuccessfully tried to recreate the backhand pass across the goal to linemate Drake Batherson that resulted in a goal Sunday.

Ottawa started fast, outshooting the Canucks 9-2 in the early going. Demko was saved by a quick whistle when the puck squeezed through his pads into the net.

But Vancouver scored at 10:14 of the first with Hawryluk poking the puck in during a goalmouth scramble after a Canucks faceoff win led to a Jordie Benn shot from the point. It was the first of the season for the former Senator.

Late in the period, a Vancouver turnover on an Ottawa power play led to Brady Tkachuk firing a shot off the post.

The Canucks made it 2-0 at 18:49 of the first after White, fighting for the puck behind his net, for some reason dumped the puck into the slot to Pearson for his sixth of the season. Batherson hit the post as the period ended.

Ottawa cut the lead to 2-1 at 3:52 of the second after defenseman Artem Zub made a fine play to keep the puck in at the Vancouver blue line, sending it to Stutzle. The German rookie’s ensuing shot hit the post but Norris hammered the rebound home for his sixth of the season.