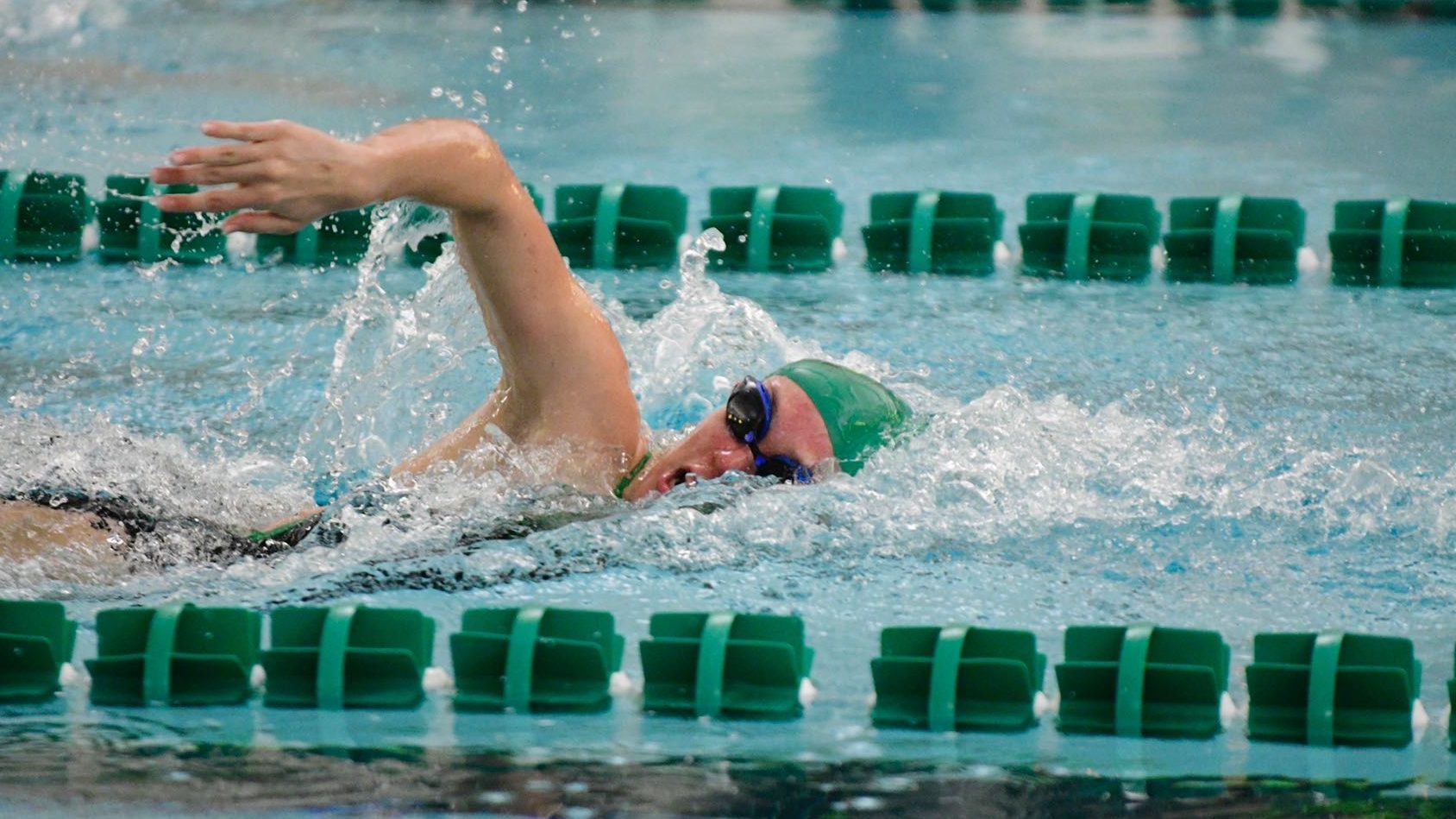 Despite suffering from brittle cornea syndrome, Grace Nuhfer has turned into a star in the pool and will swim collegiately at the University of Akron. (Photo: Gentry Appleget)

GREENWOOD, Ind. (BVM) — Grace Nuhfer first entered the pool at age 7, and she hasn’t slowed down since. Now, her impressive ability will take her all the way to a collegiate swimming career with the University of Akron.

However, her journey to becoming a college athlete has been a bit different than most. When she was around 3 years old, Nuhfer — along with her younger sister — was diagnosed with brittle cornea syndrome, which is a rare genetic disease involving the connective tissue in the eyes. As a result of the syndrome, Nuhfer is legally blind.

“It’s really rare and the fact that both my sister and I have it is really crazy,” Nuhfer said. “We definitely grew through it and you can’t take the little things for granted. We have to make sure we’re enjoying life even if our lives aren’t the same as everyone else’s.”

Although Nuhfer can’t do certain things such as drive or play sports that involve a ball or racquet, she has never known anything different, and hasn’t let the syndrome affect her.

“I don’t know any different so a lot of people will look at it and think that it’s special that I’ve been able to achieve all these athletic accomplishments even though I can’t see very well,” Nuhfer said. “I think it’s cool, but for me, it’s not too special. I’m training hard like everyone else and working hard in and out of the water like everyone else.”

With her options limited when she was younger, swimming came to the forefront as one of the top sports that Nuhfer could compete in.

“Swimming was just one of those things that was suggested to my parents after we figured out exactly what we were dealing with with my eyes,” Nuhfer said. “I’ve met a ton of amazing people and my team is like a family now so I wouldn’t trade that for anything.”

During her youth, Nuhfer began swimming locally with the Greenwood Gators. Her main events in the pool became the 50 and 100 fly, and she has never turned back.

When she was little, Nuhfer claimed she was ready for an Olympic swimming career. Perhaps part of that came from watching one of her role models in the pool.

Nuhfer has always looked up to Elizabeth Beisel, who has competed on Team USA in the last three summer Olympic games. In fact, she has actually gotten to meet Beisel and develop a relationship with her.

“I’ve attended a few leadership summits where she has been one of the speakers,” Nuhfer said. “At this point, we’re actually really good friends, too. She’s just an amazing bubble of sunshine and I just think she’s an amazing person in and out of the water.”

The 18-year-old has continued to swim with the Gators for the past several years, increasingly developing faster times.

“I’ve been putting in the hard work for the past 11 years that I’ve been swimming, so I’ve personally seen a gradual increase in speed and ability,” Nuhfer said. “Swimming with the Gators has been such a cool experience. Our team is so incredibly close, especially the group I’m with right now. It’s been great to spend every night for the past 11 years swimming with some of my best friends.”

Nuhfer’s talent in the pool has continued to shine at Greenwood Community High School as well. While competing at the high school level was an adjustment, Nuhfer enjoyed getting to swim as a freshman. By sophomore year, she had her first chance to compete with her team at state.

As a junior, Nuhfer continued to excel individually. She finished fifth in the 50 fly at sectionals, and earned a 12th-place individual finish in the 100 fly at state.

“That was crazy,” Nuhfer said. “I really didn’t expect to be going to state individually. Being able to step up to the plate in that position and represent my county was amazing. A lot of people were there to support me and it was just such a special experience.”

This past season for Nuhfer wasn’t exactly like her others, particularly due to limited fan presences and team bonding with Covid restrictions in place. However, Nuhfer still thinks her team did a great job, and despite state not going quite how she wanted, she enjoyed her final season in the pool for Greenwood Community.

“I was really proud of my senior season in general and think it was a great way to end my high school career,” she said.

Nuhfer’s high school career may be over, but she left some impressive marks. The swimming standout is part of seven school records, including three relays, and the 200, 100, and 50 freestyles as well as the 100 fly.

“As a team, we have completely cleared Greenwood’s record boards since my freshman year,” Nuhfer added. “We are the team that completely rewrote the records which is crazy. I’m definitely proud of myself for all those accomplishments but I know that without a strong support system behind me, none of that would have been possible. As much as swimming is an individual sport, it’s definitely a sport that needs to be done together and I’m grateful for everyone that has been a part of my swimming career.”

Part of that support system comes for Nuhfer’s mom, who has been an assistant coach on the team. Nuhfer’s sister also competed on Greenwood Community’s squad this year, creating a special season for the family.

In fact, Nuhfer’s mom has been a big reason for her daughter’s athletic development, as she was a former track and field athlete at Purdue University. With Nuhfer about to begin her own collegiate career, having her mom in her corner during this process has been extremely beneficial.

“My mom was a crazy good athlete,” Nuhfer said. “She learned so much being a college athlete and her experiences have definitely helped me know what I’m looking for in a college. It’s been great to have her in my corner and supporting me.”

Ever since she began swimming, Nuhfer knew she wanted to swim in college at a Division I level. Now, that dream is about to become a reality.

She first began garnering college interest during her junior season. Although the pandemic made recruiting difficult, Nuhfer was still able to narrow her choices down to two: Queens University of Charlotte, or Akron.

In the end, the Zips were the choice, and their program was too good to pass up.

“Everything I had been looking for in a program was at Akron,” Nuhfer said. “Akron was a lot closer to home for me but just the team atmosphere was that family feel that I had with my club and I’m confident that will be the same if not better there. I’m looking forward to having a team of girls that will just help one another be the best versions of ourselves. That’s what I’m most excited for.”

Nuhfer hopes to make an immediate impact at Akron and help the team in any way she can. Eventually, she also hopes to compete at the NCAA championships.

Academically, Nuhfer will follow in the footsteps of her parents and study business at Akron with a specific focus on marketing. She already has started a couple of her own entities through the years, including a photography business.

Regardless of where her future takes her, Nuhfer has already defied the odds with a truly impressive swimming career. She left quite a legacy at Greenwood Community, and her story will only continue to get better at Akron.