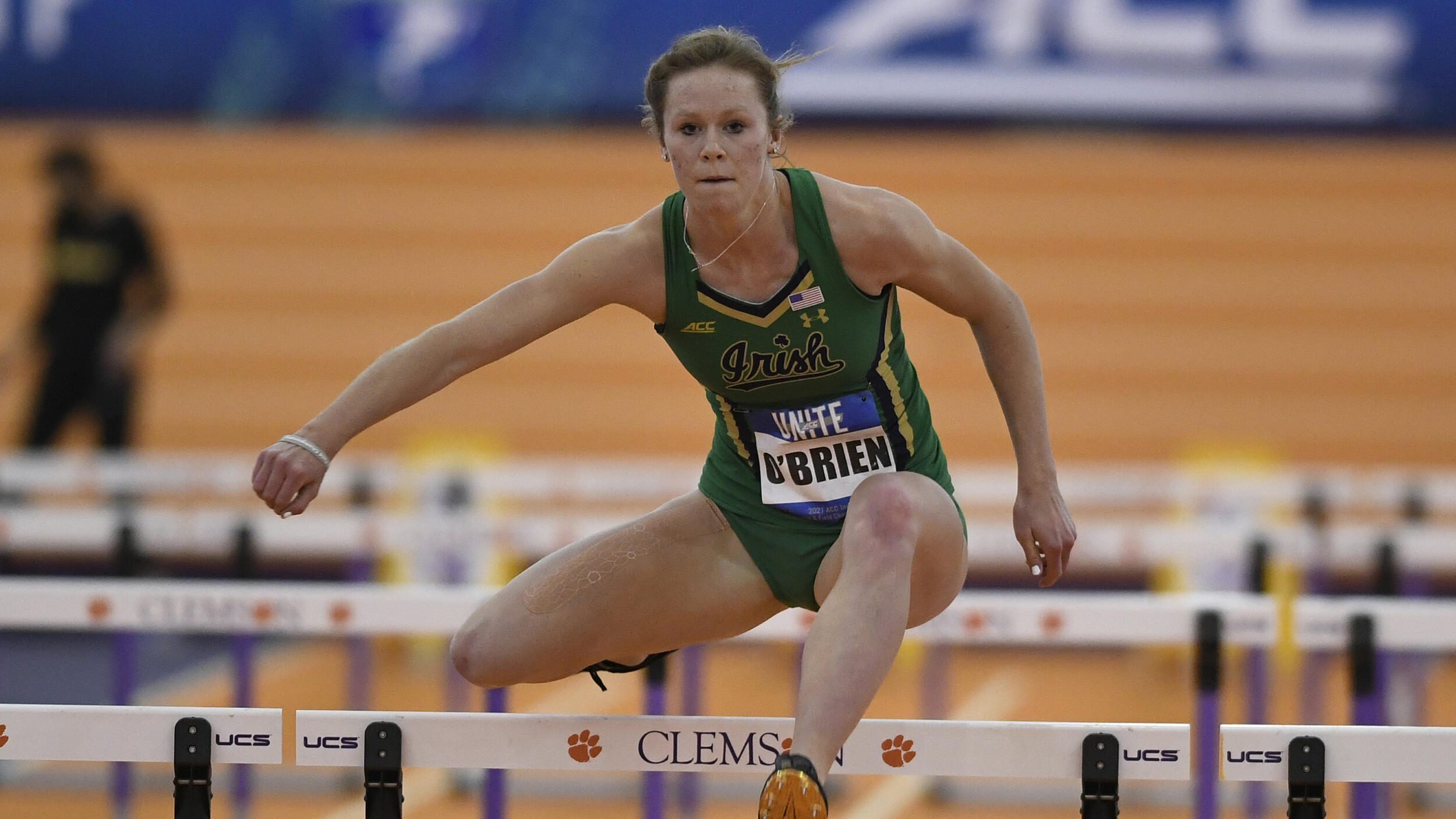 After a standout high school track career, Jadin O'Brien has continued her success at Notre Dame and recently finished fourth overall in the pentathlon at the 2021 NCAA Division I Indoor Track and Field Championships. (Courtesy: Notre Dame Athletics)

SOUTH BEND, Ind. (BVM) — Jadin O’Brien is well-known in Wisconsin for what she has accomplished as a track and field athlete. Now, she is taking no time to make sure those in Indiana know her name too.

Recently, O’Brien had the opportunity to partake in the 2021 NCAA Division I Indoor Track and Field Championships. Competing in the pentathlon, the Notre Dame freshman scored 4,296 points. The performance was a historic one, as it broke a program record for the Fighting Irish.

The pentathlon consists of five events, including 60m hurdles, high jump, long jump, shotput and 800m. At the championships, O’Brien set personal bests in all five competitions. The stellar performance earned her a fourth-place finish, and first team All-American status.

It was a truly special showing for O’Brien, but even more remarkable considering the circumstances she was dealing with.

Coming into her first season at Notre Dame, O’Brien had never competed in the pentathlon. But in her first meet doing it at the South Carolina Invitational, she took home first place.

“I had never done a pentathlon before,” O’Brien said. “Going into this first meet, I just wanted to go out there and see what I could do. That first meet I ended up winning which was nice, but I ended up learning a lot from that meet.”

Her first college season has not come without challenges, however. With the pandemic continuing to impact all angles of sports, O’Brien has been forced to quarantine three times during the season so far. But perhaps her biggest challenge began during the ACC Indoor Track and Field Championships in February.

“We flew in and for some reason, my legs kind of felt like blocks of wood,” O’Brien said. “I just tried to ignore it, but it didn’t go away. Race day came and I was warming up and all the sudden I felt something tear in my leg. I immediately knew something wasn’t right.”

O’Brien notified her trainer, who helped her manage the injury so she could still compete.

“It hurt a lot, but I wasn’t going to let that stop me,” O’Brien said. “My leg hurt bad the whole time but I fought through it.”

Remarkably, O’Brien would finish second in the pentathlon at the ACC championships. After getting her leg further evaluated after the meet, it was revealed that the freshman had a torn quad.

Throughout the week leading up to nationals, O’Brien did very little event work. By race day, her leg felt as bad as it had.

“My goals for the meet were just to get through it without it giving out,” O’Brien said. “But I was able to PR in all five events. The thing I’m most happy about is that I didn’t let something that could have prevented me from competing stop me. I took on the challenge and I didn’t let a torn quad define my first national appearance. I’m definitely very proud and very grateful, it was just a surreal experience.”

O’Brien displayed her heart and talent with the record-setting, fourth-place finish. But it won’t be the last time, and certainly wasn’t the first time this incredible athlete has done so in her life.

Growing up in Pewaukee, Wis., O’Brien’s main sport was soccer. But she also began competing in track in sixth grade, and from there, a star was born.

O’Brien’s speed was noticed early in her athletic career, and some of that can be attributed to good genes. Her mom, Leslie, was a former collegiate track star at Bowling Green State University. In high school, she never lost a race as a four-time state champion. Leslie has also been her daughter’s track coach throughout high school.

Her dad, Kevin, was also a football standout in college at Bowling Green who went on to play in the NFL with the Patriots and Bills, and later played in the Canadian Football League and NFL Europe.

“Having my mom as my coach, I wouldn’t have wanted it any other way,” Jadin said. “As I grew up, she was always there and always preparing me. She has the experience and could always relate to me very easily, which helped a ton. Having two parents with athletic backgrounds like they do, it really inspired me growing up to be great. I tried to follow their footsteps and took what they said to heart. They wanted to prepare me to succeed and they definitely did.”

By high school, Jadin faced a dilemma, as soccer and track were in the same sports season. Ironically, prior to high school, Jadin had participated in a soccer camp at Notre Dame, but didn’t enjoy it. Her decision was made to pursue track, and it ended up being the right one.

“I decided to run track in high school, and it was one of the best decisions I ever made,” Jadin said.

It didn’t take long for Jadin to prove her decision right at Divine Savior Holy Angels High School (DSHA). As a freshman, she won state in the 300m hurdles, and was just barely shy of the state record in Wisconsin.

In her sophomore year, she would end up breaking the state record in the same event despite finishing second at state. However, the runner-up finish added fuel to the fire, as Jadin would come back in her junior year to win both the 100m and 300m hurdles. Overall in her high school career, Jadin was an 11-time state qualifier across multiple track events.

During that same time, Jadin also began emerging on the national scene. That specifically began in 2018, when she became an AAU Junior Olympics national champion in the heptathlon — a seven-event competition which Jadin hadn’t been familiar with prior.

“I tried it and I really, really liked it,” Jadin said. “From there, I went on to regionals in Iowa and won that meet. Then we went to sectionals and from there was the AAU Junior Olympics. I was definitely very nervous but it worked out awesomely.”

The following summer, Jadin qualified for the USA Track and Field U-20 National Championships where she would finish third overall.

“I was even more nervous just because I was competing with kids who were in college,” Jadin added. “But being able to compete against college kids was a huge blessing and was definitely a learning opportunity for me. I was really excited about finishing third overall and the opportunity to improve at a high level really helped me get to where I am now.”

Jadin concluded her high school track career with 13 school records, and received numerous accolades including all-conference, all-state and conference athlete of the year. Jadin was also a scholar athlete both within the Greater Metro Conference and within the state, and she was awarded Sportswoman of the Year by DSHA in addition to receiving a Woman of Character honor.

Her awards and athletic abilities were not just limited to track either. Jadin was also a star for DSHA’s basketball team where she was a captain from sophomore to senior year. She was her team’s leading scorer and rebounder throughout those final three years, and also was a 1,000-point scorer for the Dashers as a first team all-conference player.

“Making varsity as a freshman was huge for me and my sophomore year when I was asked to be a captain, that allowed me to grow as a person,” Jadin explained. “My junior and senior years definitely stick out the most because I had a bigger influence on my teammates.”

Perhaps her fondest, yet maybe toughest memory on the hardwood — outside of making a 60-foot buzzer-beater to beat a rival as a junior — came towards the end of her senior season.

“We made it to state and had a terrific season,” Jadin said. “We just loved being around each other. But the night before our game, we were in the hotel and got the call that we all needed to go home and state was canceled. Hearing that call and knowing that all the hard work you put into that season and all the sacrifices you made to get that far disappeared was heartbreaking.”

Unfortunately for Jadin, it wasn’t much later that her senior track season was canceled due to the pandemic as well.

“That whole time period was a very dark time,” Jadin said. “I had a lot of goals and our team had a lot of goals. Not being able to have closure was tough, but over time, I’ve been able to cope with it and I’m so grateful for the years that I did have.”

Despite the tough finish to her high school career, Jadin’s college tenure could not have started much better. While she considered going to the University of Minnesota and University of Tennessee as well, Notre Dame set themselves apart, and she couldn’t be happier with her decision.

“God is a big part of who I am, so coming to a university with the history and faith opportunity that Notre Dame has, it stood out from all the other colleges,” Jadin noted. “Also having the academic background that Notre Dame has is something no other school could beat.”

Already making quite the name for herself at Notre Dame so far, Jadin is excited for what the rest of the season, and her future as a whole, holds for her in South Bend, Ind.

“For the rest of the season, I’m just going to focus on doing my best and making myself and my teammates better.”

But the ultimate goal for Jadin is to someday go on to compete in the Olympics. She knows how much work it will take to get to that level. But through each day and each meet, Jadin continues to prove she just might have what it takes.

“My goal is to make it to the Olympics,” Jadin said. “I’m ready to put in all the work that’s required to get there. It’s a big goal, but I’ve had this goal since I was very little. I have a drive to be the best in all that I do and this is something that I really want.”