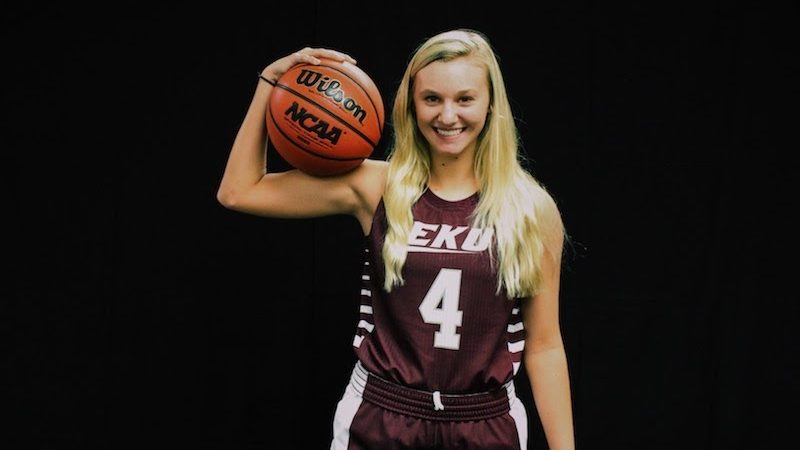 UNION, Ky. (BVM) — Playing for the Ryle High School Lady Raiders basketball team can have both its benefits and disadvantages. A winning program with four straight district titles, three straight regional titles and a 2019 state championship, coming out of Ryle certainly looks good on a college basketball resume.

However, with the success also comes the expectation to maintain the level of play while also attempting to step out of the shadows of those players from years before. That was exactly the situation Ryle senior guard Brie Crittendon found herself in this season, but she has been able to make a name for herself while helping to maintain the team’s success.

“[Ryle] is honestly the greatest program I’ve ever been in,” Crittendon said. “Just going back on our successes, it’s just a team that works very, very hard and we always push ourselves to get that state title again even though this year we ended short. It’s a great program to be a part of and I’m really happy I am.”

Crittendon followed in the footsteps of a pair of elite Ryle players from teams before her. Former Lady Raiders player Lauren Schwartz first got the ball rolling for the Ryle program when she headlined a team that won the program’s first regional championship in school history and won a school record 29 games. Individually, Schwartz racked up a number of accolades including making the 33rd District All-Tournament Team and winning the MVP of the 9th Region. Schwartz averaged 19.2 points and 7.6 rebounds per game as a senior prior to taking her talents to Rice University where she helped lead the team to a Conference USA Tournament Championship appearance this past season.

As a young player on the Ryle team during Schwartz’s time with the program, Crittendon learned some valuable lessons about moving forward in games.

“She taught me mental toughness,” Crittendon said. “I would get down on myself a lot and she’d pull me back up and say ‘Hey you’ve got this. We’re good. It’s fine.’”

After Schwartz came Maddie Scherr, a Northern Kentucky legend in her own right. Scherr would help lead the program to its first ever state championship in 2019, winning the tournament’s MVP in the process. By the end of her career, Scherr would be a two-time First-Team All-State member, a two-time Gatorade State Player of the Year and a McDonald’s All-American, the first-ever in the northern part of the state. With the 17th overall ranking on ESPNW’s Class of 2020, Scherr would take her talents to the University of Oregon where she helped lead the Ducks to a 15-9 record and an appearance in the Women’s NCAA Tournament Sweet 16.

With the two being closer in age, Crittendon and Scherr shared a lot of moments on the court and Crittendon was sure to soak up as much knowledge as she could from the former Ryle star.

“I learned a lot from her mostly just to be calm and controlled,” Crittendon said. “She’s taught me some valuable things like it’s not all about scoring points and it’s more getting your team involved, making the extra pass to get an open shot. Just work hard and you will achieve a lot more things than you ever thought you could’ve.”

Not the easiest acts to follow certainly, but Crittendon did so and then some, leading the Lady Raiders to a 23-3 record and the No. 2 spot in the state’s AP Poll while averaging 14.8 points, 4.5 rebounds, 3.3 assists and 3.1 steals during the year. Those numbers earned the senior the Northern Kentucky Girls Basketball Coaches Association Division I Player of the Year, following in the footsteps of both Schwartz and Scherr who both won the award the previous two seasons.

Crittendon also led the team to its fourth straight 33rd District Championship and was also named the Region 9 Player of the Year, making the senior eligible for the state’s Miss Basketball award. While she feels that she was plenty deserving of the awards and honored by receiving them, Crittendon just hopes her lessons as a senior will rub off on the next classes as they take over the reins at Ryle.

“As a senior I didn’t really focus on the awards, I focused more on getting the team prepared for next year honestly,” Crittendon said. “I knew once me, Maddie and Lauren left things were going to be a little different there and I just wanted to prepare next year’s seniors and juniors for that big role as being leaders. It wasn’t about awards to me, it was a great accomplishment for me and I feel I deserved every single one of those [awards]. … Those were just kind of reminders that hard work pays off.”

The similarities between the senior and her two former teammates don’t stop there either.

Crittendon will also join the pair as a member of a Division I program when she joins the Eastern Kentucky University Colonels next season. The senior had a number of other DI offers including from Tennessee at Chattanooga, Austin Peay and Bellarmine, but decided to join the team at EKU instead thanks in part to the education she would receive, with the goal of majoring in chemistry and eventually getting a Master’s degree, and a close connection with the coaching staff.

“I chose EKU mostly because of Coach Sam [Williams],” Crittendon said. “By just looking at what she’s done to Eastern the past couple of years, she really turned that program around. I wanted to be a part of something that could be bigger than what the other schools have offered, but mostly it was Coach Sam.”

In a season-ending regional semifinal loss to Notre Dame, Crittendon gave her all leading the Lady Raiders with 15 points while also grabbing eight rebounds and adding six assists. Though the game marked the final chapter of her high school career, Crittendon will still have ample opportunity to increase the exposure of the Ryle program when she joins the Colonels in the fall. The senior is excited to show the rest of the country what this girl from Kentucky can do.

“My biggest goal is getting a lot of time there,” Crittendon said. “On the basketball side of things, [my goal is] getting that time, making lifetime friends and leading them to the NCAA tournament.