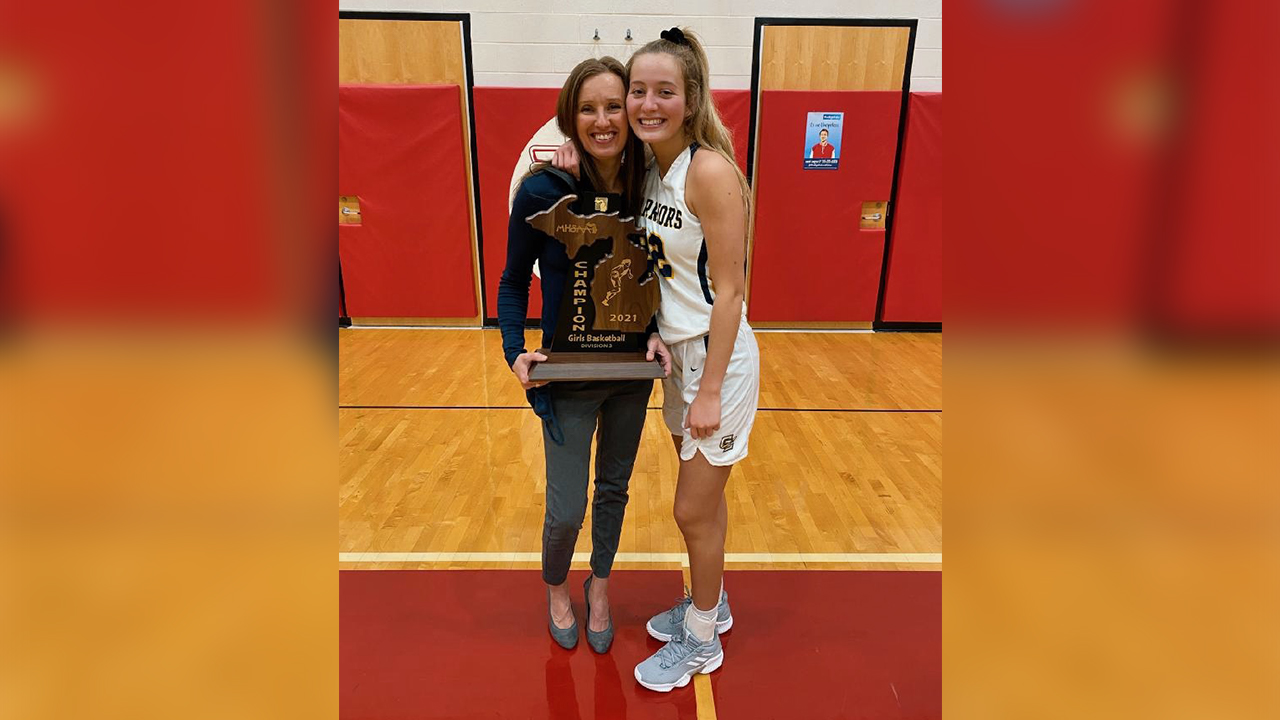 Abrie Cabana, right, has gotten to cherish many special moments with her mom and coach, Andrea Cabana, left, over her spectacular career at Grass Lake High School. (Courtesy: Abrie Cabana)

GRASS LAKE, Mich. (BVM) — Abrie Cabana has been through a lot of basketball. But the 2021 season has been unlike any other. Just months ago, she thought she may never suit up for Grass Lake High School again.

“It was definitely really difficult,” Cabana said. “For a while, we didn’t know if we were going to get a season and that not knowing is very difficult for many reasons. I just tried to stay positive through the whole thing.”

Eventually, Cabana and her Grass Lake teammates did get a season. Although it has been different with limited crowds, wearing masks while playing and even having to quarantine at different times throughout the season, the Warriors are thankful they got to play.

Grass Lake has made a run all the way to the state championship game in Cabana’s senior season. After a 49-36 win over Brooklyn Columbia Central in the quarterfinals, the Warriors had a no contest with Hemlock withdrawing from the tournament in the semis. Now, they will face Kent City in the MHSAA Division 3 state championship.

“Our whole team is playing great,” Cabana said. “We wanted to get to Breslin and we want to win.”

A big reason for this incredible run is because of Cabana, who has been poised for this journey from the moment she began playing in second grade.

“I loved the physical contact and the competition of every game and every practice,” Cabana said. “I love everything about it, the competition, working hard and the highs and lows of the game.”

Growing up, the guard was destined for a life in basketball, as her mom, Andrea, is a coach and her older sister, Gracie, was a star player. Gracie was a 1,000-point scorer both in high school and in college at Spring Arbor University.

“I grew up with her and have seen her play and work really hard,” Abrie added. “Her career is over now but she is definitely one of the biggest role models I had on and off the court. She really helped me become the player that I am today.”

Abrie played locally during her youth, and began playing with Michigan Premier — her mom’s basketball club — in eighth grade. There, she has won AAU states multiple times.

“The trainers and coaches have been extremely beneficial for my current game,” Abrie said. “It’s helped me and all my teammates get better.”

As a freshman at Grass Lake, Abrie was destined to make an immediate splash, and she did just that. Playing with some talented upperclassmen, Abrie still was a scoring threat with 13 points per game, and was named an all-conference player in year one with the Warriors.

The talented guard continued to lead Grass Lake to success in her sophomore and junior years, helping the Warriors to conference titles in both seasons. As a junior, Abrie averaged nearly 19 points per game, and was named a second-team all-state player.

“The accolades are definitely cool and it’s nice to be acknowledged,” Abrie said. “It validates the work I have put in and just really puts into perspective what I have accomplished.”

“It was really exciting because Grass Lake doesn’t do any records besides this one, so it was pretty cool,” Abrie added.

Enjoying the physical aspect of the game, the guard is not afraid to get inside and draw contact. Getting to the free throw line is a big part of Abrie’s game, and she absolutely excels at the charity stripe. Currently, she is 11th all-time on the MHSAA’s single-season free-throw percentage list after shooting an incredible 88% last year.

“It’s definitely cool to be in the record books,” Abrie said. “Free throws are a big part of winning games so I really have focused on that.”

Now, Abrie has a chance to finish her high school career with the ultimate prize. What makes the moment more special — and has also made these past accomplishments even more cherished — is that Abrie has been able to share all of it with her coach and mom, Andrea.

“I love my mom, she is such a good coach in every single aspect,” Abrie said. “She always tries to get the best out of all of her players, including me. Her and my dad have always pushed me and made me the player I am today. Sometimes I don’t like it, but it has helped me. My mom and I have such a special bond. It’s definitely made us closer and she is my best friend.”

Grass Lake has made impressive strides this season, winning its first regional title since the 1970s, and now having the chance to win the program’s first-ever state title. But no matter what happens, Abrie will still have a bright future on the hardwood.

Early in her high school career, Abrie had multiple offers and interest from both Division I and Division II schools. Ultimately, she decided that Division II Grand Valley State University (GVSU) was the right spot for her.

“I chose Grand Valley because I believe in what they’re doing there,” Abrie said. “Their program is so great. I felt a huge connection to the coaches and the girls there. It’s just my perfect fit.”

Abrie committed to GVSU as just a 15-year-old sophomore. Some may have expected her to wait and seek a higher Division I offer. However, the basketball standout isn’t necessarily worried about level, but rather contributing to a winning program.

“I wasn’t really concerned with going DI,” Abrie explained. “The main thing for me was going to a program that had a chance to win a national championship. I want to go there and have an impact and I know I can do that at Grand Valley.

“I’m super excited and it’s been a long time coming. I’m excited to help the program get stronger, make a deep run in the tournament and hopefully win a championship.”

Through the years, Abrie was able to look up to Gracie and what she did on the court. But she has also been able to admire what her mom has done as a coach. A great playing career is ahead at GVSU for Abrie, but after, she may just follow in her mom’s path.

“I love basketball, I always have and it’s always been a part of my life,” Abrie concluded. “Maybe I will follow in my mom’s footsteps and coach at Grass Lake or Premier.”