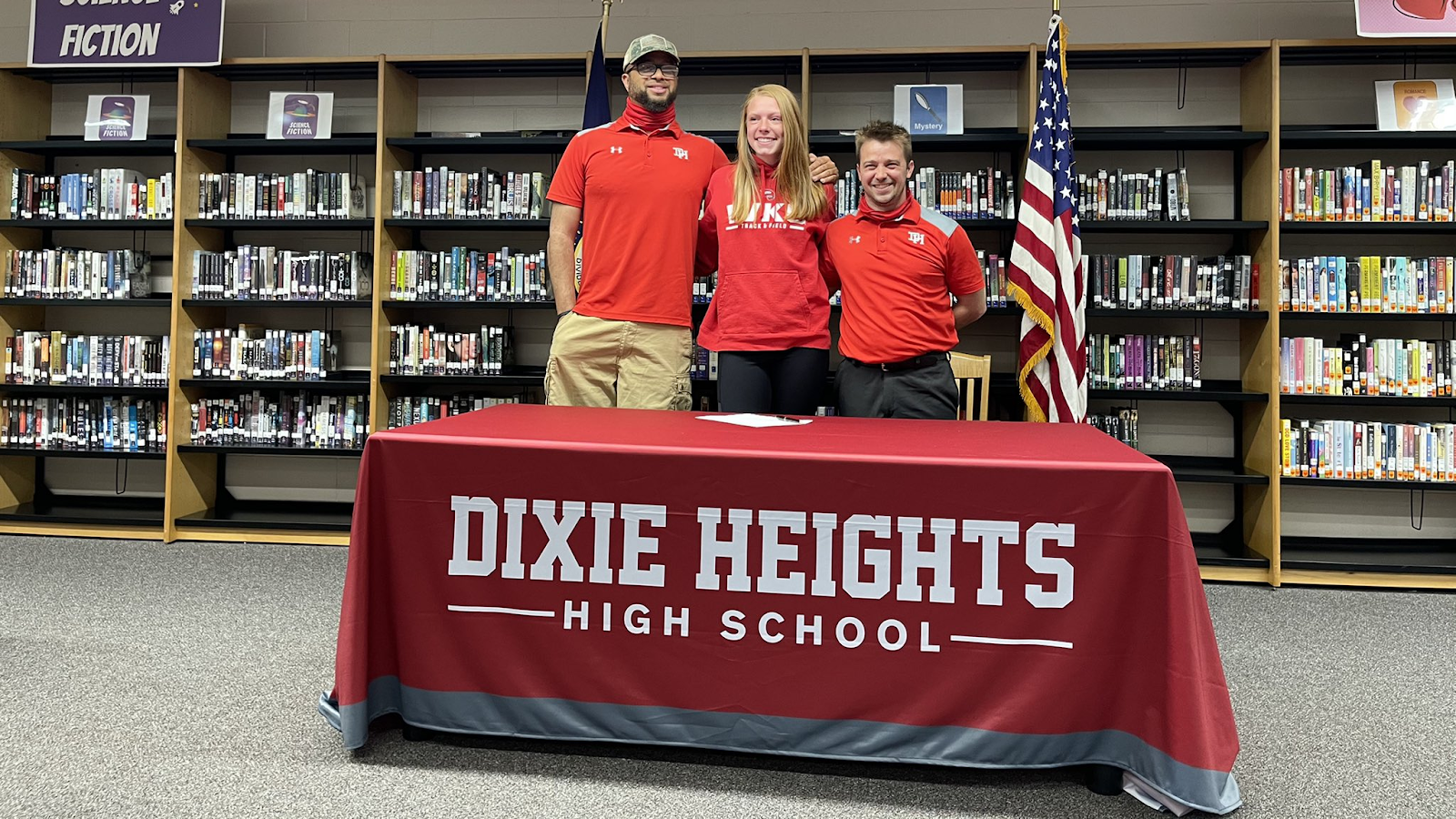 FORT MITCHELL, Ky. (BVM) — Dixie Heights High School senior track member Allison Arnett has a propensity to seemingly outjump anything in her way. That is what has gotten her name around the state as one of the premier high jumpers in the Commonwealth. Though she is slowly getting reacclimated to the Kentucky high school track season after nearly two years without competition due to COVID-19 canceling spring sports a year ago, Arnett will look to try and win her first state title in the high jump after finishing No. 4 as a sophomore in 2019 with a jump of 5’1.75”.

However, before she can make her conquest during the outdoor season, Arnett had to finish up some important paperwork.

The bouncy senior officially signed her National Letter of Intent to join the track and field team at Western Kentucky University during a signing ceremony at Dixie Heights on April 9. The decision will keep Arnett’s jumping ability in state for another four years, allowing her to further build on her reputation as one of the best jumpers in the state of Kentucky.

Hands down one of the most prolific athletes @DixieHeightsHS has EVER seen..@wku @WKUTrackField should be proud of landing this one!! pic.twitter.com/801oHZDfYg

During her career at Dixie, Arnett has simply been one of the best jumpers in program history. During her brief career, she won the Wildcat Classic and took the Kentucky Track and Cross Country Coaches Association Indoor high jump title in 2019 prior to her strong finish at the state meet.

Though she is not quite at the high jump level she was prior to the long delay in competition, currently hitting a season-high 5’4” in the event which is two inches below her PR, Arnett still has a couple of months to leave her legacy in the high school ranks. Once she is done literally jumping past her competition, Arnett will head to Bowling Green to try and help the Hilltoppers become one of the best teams in Conference USA. Her new coach, WKU Director of Track & Field Brent Chumbley, feels she can do just that.

“Allison is one of the best high jumpers in the state of Kentucky and will be favored to win the state competition,” Chumbley said in a team press release. “She is the top returning senior and has a PR of 5′ 8”.  She can make an immediate impact for us in C-USA. We can’t wait to get her on The Hill.”

To start it off, we're expanding the family!

We can't wait for you to join us, Allison! #GoTops pic.twitter.com/KDAI9zJz8r