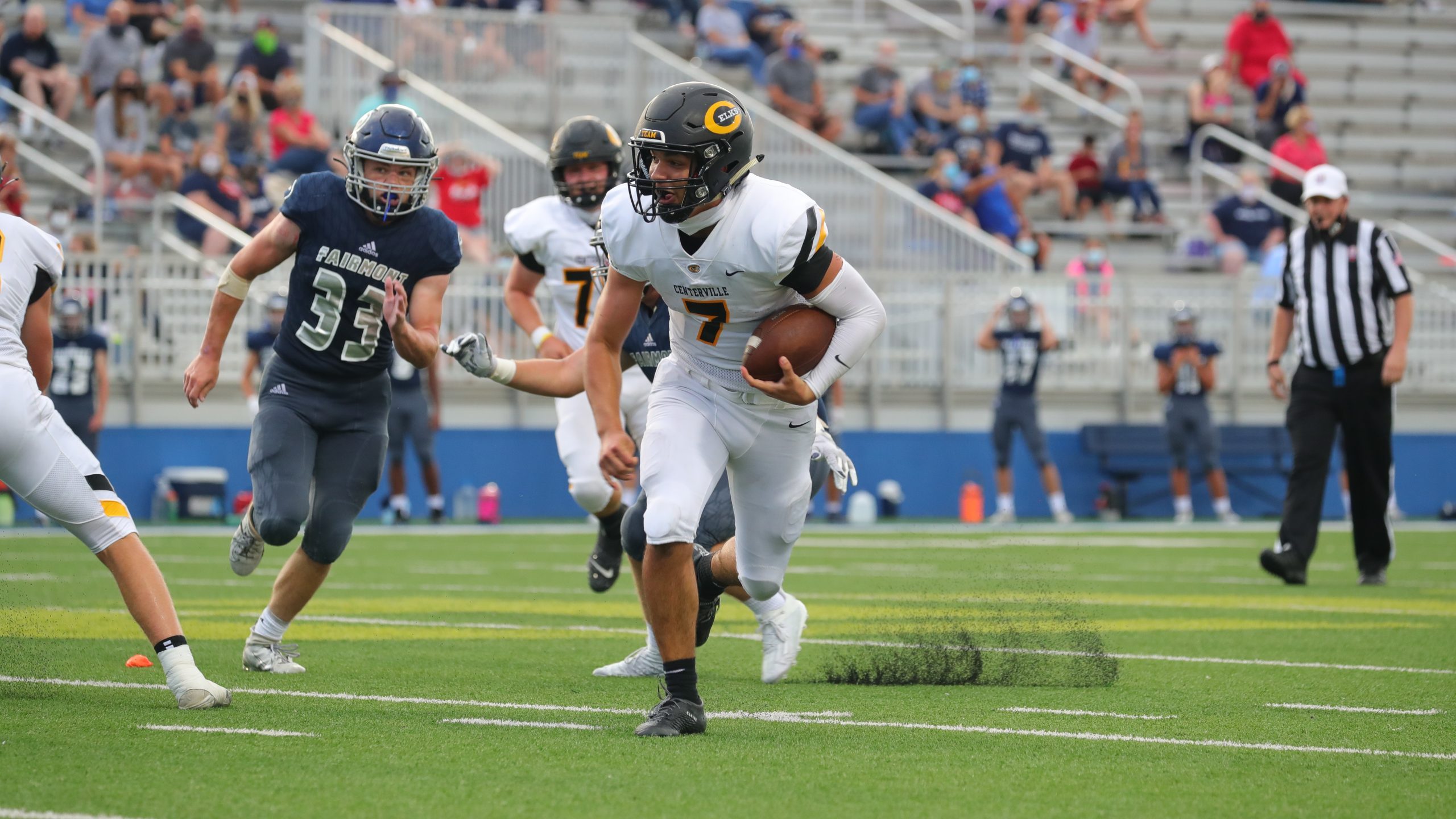 CENTERVILLE, Ohio (BVM) — Quarterbacks like Chase Harrison don’t come around too often, and it is not surprising to see the level of college interest in him. Recently, the four-star recruit made a verbal commitment to continue his career at the next level.

Over the last year, recruiting for all high school athletes has been pretty tough. And for Harrison, not being able to take any official visits was disappointing.

“It was definitely frustrating to not be able to show coaches what I can do,” Harrison said. “But it was something that every kid in the country had to deal with.”

Despite the unique times, Harrison was still heavily recruited, and had interest from Louisville, a few Big Ten schools and several Mid-American Conference (MAC) programs. In the end, he chose to join Conference USA and play for the Marshall Thundering Herd.

“Marshall was after me the most,” Harrison said. “They have amazing coaches and everything just was amazing about Marshall which set them apart. The campus is amazing, the fan base is awesome and they are always going to compete for a conference championship which is something I really want to do. There are really no negatives about Marshall and I’m just happy to be a part of it.”

Now committed as he finishes off his junior year of high school, Harrison can focus on finishing off his prep career strong at Centerville next fall.

Initially, Harrison was also a basketball player, and continued his career on the hardwood through his first year of high school. But football was the family sport, and Harrison grew to love it from a young age.

“I just loved the game,” Chase said. “My dad playing college football and my brother all helped out and I wanted to follow in their footsteps. The one person I’ve looked up to my whole life is my brother. He’s always been a good example through my life and does the right things. Watching my brother play his whole life was really fun, he was a really good player.”

Chase has played quarterback throughout his young football career, becoming an accurate passer who can make any throw on the field. Throughout his youth, he grew a love for the game while also realizing his special talent under center.

It wasn’t before long that Chase was ready to take over the reigns for the Centerville Elks. By the third game of his freshman year, Chase became the team’s full-time starter. While there may have been some growing pains as there are with any young quarterback, Chase displayed his talent right away for the Elks by throwing for nearly 1,500 yards during the 2018 campaign.

“My first two years were me adapting and getting used to things,” Chase said. “But each year I just got better and saw what I needed to work on.”

Chase improved vastly as a sophomore. In 2019, he would throw for nearly 2,500 yards and 24 touchdowns to just seven interceptions. The quarterback also added 180 yards and an additional four scores with his legs.

Despite a shortened schedule in his junior season last fall, Chase still didn’t miss a beat. The 17-year-old threw for over 1,700 yards and 18 touchdowns, helping the Elks to a .500 record.

“With Covid, it was definitely a frustrating season, but I’m grateful we got to play,” Chase said. “I think with the circumstances we had, our team did really well.”

The season also included some historical feats for Chase. As just a junior, he already holds the Centerville all-time passing record, previously held by Ryan Hawk.

“I’m definitely honored because of our history,” Chase said. “I had no clue that I was close because I don’t really pay attention to that stuff and just go out and play. I learned from my coach after the game.”

Impressively, Chase also holds program records for touchdown passes in a game, season and career. Next fall, he will also have the chance to crack the top-50 all-time in Ohio when it comes to passing yards and touchdowns. However, he is more focused on his team’s success.

“I know my name is on the map, but I want to put our team on the map,” Chase said. “I just want to make a run at state with my football team.”

Chase isn’t one to focus on individual accolades or accomplishments. Although he is labeled as a four-star quarterback by Rivals, and is ranked as a top-15 quarterback nationally in the Class of 2022, all that does is motivate the young signal-caller.

“It definitely motivates me everyday because I think I am one of the top quarterbacks in the nation,” Chase said. “There’s always room to grow but I use that as motivation to get better everyday.”

With a more normalized season expected next fall, Chase is eager to get back on the field with his Centerville teammates to see what the team can do in his final go around with the Elks.

“During the offseason I want to get faster and obviously bigger and stronger,” Chase said. “The goal for the team next year is to make a run at state and just do our best each game.”

From there, it will be off to Marshall to begin his college football career, where Chase hopes to lead the Thundering Herd to continued success.

“I’m extremely excited to be a part of that program,” Chase said. “My goal is to win a championship every year and hopefully even compete for a national championship.”

And beyond Marshall, Chase hopes to continue playing. Any quarterback of his caliber dreams of playing in the NFL someday, and Chase hopes to soon turn that dream into a reality.

“My end goal is definitely to make it to the NFL,” Chase said. “Marshall having a rich history of sending quarterbacks to the NFL definitely helps. It would be awesome to make it and everyday I’m just trying to get better to reach that goal.”