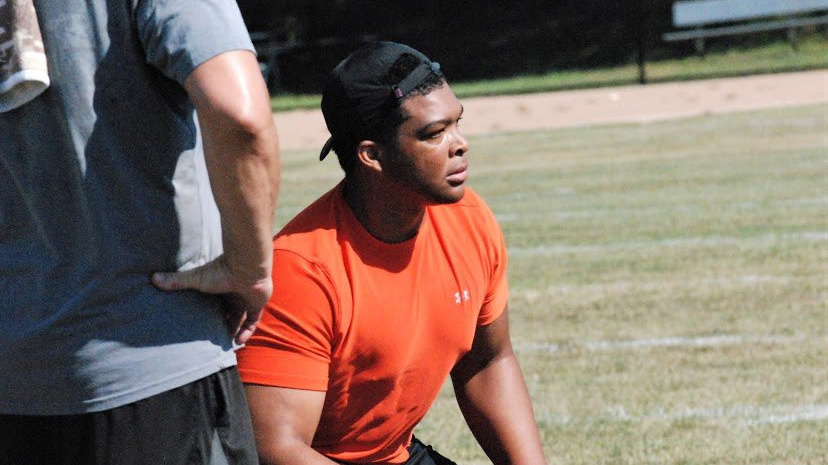 OWINGS MILLS, Md. (BVM) — McDonogh School sophomore Antonio Tripp Jr. remembers his first touchdown in youth football when he was just 8 years old. It was at that exact moment when he knew that he wanted to live for the game of football.

The 16-year-old has since changed his position to offensive lineman which has only proven to be beneficial for him. Tripp is ranked as a four-star offensive guard by 247Sports and is No. 7 in his position nationally after playing just one season. His sophomore season was canceled because of the COVID-19 pandemic so he only has his freshman year to show for: he allowed only two sacks out of 14 games and had about 25 pancake blocks.

“I find myself a very efficient blocker anywhere on the field,” Tripp said. “Honestly I believe what sets me apart from the other Class of 2023 linemen is that I can play all five linemen positions at a high level. Whether it’s pass protection, run blocking, pulling or down blocking, I can make all of those blocks with ease and consistency.”

Since you on here watch my freshman season highlights more to come https://t.co/PY5EVGx4ep

This is exactly why Tripp is recruited by some of the top programs as an under-classman. He already has 15 DI offers from teams that include the Michigan Wolverines, West Virginia Mountaineers, Michigan State Spartans, South Carolina Gamecocks and he has an at-home offer from the Maryland Terrapins. The Penn State Nittany Lions also put forward an offer and several months ago Tripp made an unofficial visit to his “dream school”.

“Penn State is a school that I grew up watching and one that I like a lot,” Tripp said. “But I still haven’t been anywhere besides there or the DMV really. So, my options and recruiting process is very much still open.”

Aside from looking to commit to a historically successful football program, Tripp made it clear on what other boxes he’s looking to check off before he makes any decisions.

“Most importantly, of course, the education and degrees available at the university is important to me (I’m really big into computer programming right now),” Tripp said. “As we all know football takes up a very small portion of your life and if you don’t play your cards right you can easily turn hero to zero very quickly. That’s why I’m looking somewhere that will better me as a husband, father, son and friend. The ‘family’ type of team is also very important as those are the people I’m going to be going to war with every Saturday so that’s a big part in my recruitment.”

At 6-foot-5, 300-pounds, Tripp said aside from his strength, flexibility and footwork, one of his biggest strengths is his height and body composition.

“I carry my weight like I’m 280 which allows me to be able to bend just as good as the D-lineman and keep up,” Tripp said. “I can keep up with the biggest linemen or the smallest and faster linemen. My length also allows me to be very efficient. As my arms allow me to keep the defender at bay most of the time. My consistency is also a very big part of my game as I don’t give up plays or ‘take a play off’. I always try to make key and smart blocks rather than going for the highlight play, I’d rather pull off that block that will kick my running back out for a huge gain.”

With two more seasons left of his high school career, Tripp said his goal is to stay at his same weight by training six days a week with mixed cardio in those sessions. He said most recently a change in his diet to clean foods was necessary for him and so he’s more excited now than ever to see what he can accomplish as a junior.

“You can expect pure dominance from my high school career here on out,” Tripp said. “You can expect me to drastically climb in the rankings and assert myself as the best in 2023. You can also expect to see a leader who leads his team to victory and keeps the same energy and passion whether we’re losing or winning.”

Tripp acknowledged that no matter where he plays after high school, he hopes to be a freshman starter, get All-American selections and do his part in being a teammate. Following a successful collegiate career he wants to take his skills to the highest level.

“I know it’s super early but I just want at least a shot in the pros,” Tripp said. “My why really is my family and how I’ve seen my parents make nothing out of something each and every day. That’s what drives me to spend that extra one hour in the gym and that extra hour on the field. I just want to be able to let them kick their feet up and relax finally.”