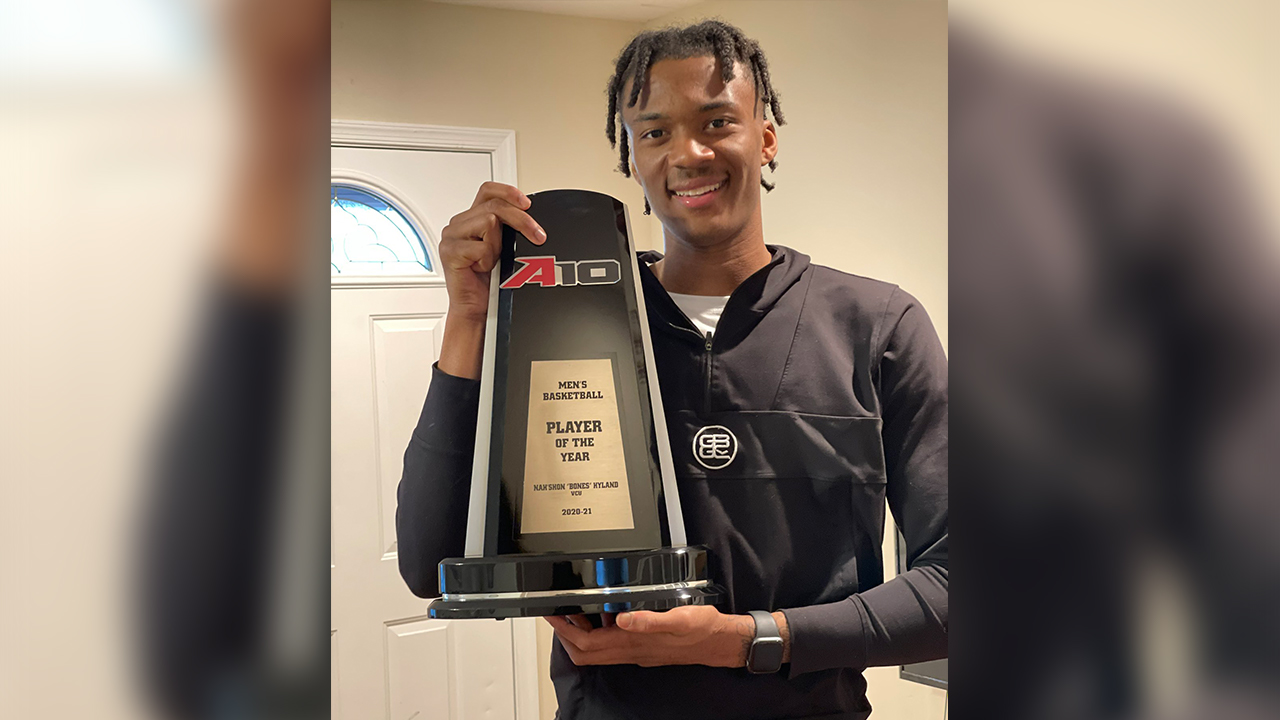 After winning the A10 player of the year, VCU men’s basketball star Nah’Shon “Bones” Hyland declared for the 2021 NBA Draft. (Courtesy: @BizzyBones11/Twitter)

RICHMOND, Va. (BVM) — Virginia Commonwealth University men’s basketball player Nah’Shon “Bones” Hyland had one of the best seasons in Rams’ program history. The sophomore guard scored 19.5 points per game with 4.7 rebounds, 2.1 assists and 1.9 steals as well on his way to Atlantic 10 Conference Player of the Year honors, becoming the first Rams player to earn the conference’s award and the first to win a conference player of the year award since Eric Maynor in 2009. His play helped push VCU to a 19-7 record, an A-10 championship game appearance and a No. 10 seed in the NCAA Tournament, though the team would suffer the only cancelation of a game in the field due to a positive COVID-19 test prior to game time.

I don’t even know where to start.. Growing up as a kid who came from nothing these type moments was all I dreamed of. Playing in March madness was always a thing of beauty to me. I had a huge feeling we were about to make a crazy run & Just like that my heart is shattered again😓

Following the stellar season, Hyland announced on April 17 that he would enter the NBA Draft with a plan to sign with an agent, despite not being able to suit up in March Madness, a lifelong dream for the sophomore. With the decision, Hyland is the first sophomore in program history to declare for the NBA Draft and could become just the 11th player in Rams’ history to play in the NBA.

Thank you Ram-Nation for an amazing two years. May God bless you all & Continue to guide and lead me on my next journey ahead. #5Out #GodsChild #Blessed #HighlyFavored #GrandmaBaby 💛 pic.twitter.com/cnnEI5CMta

The decision makes all the sense in the world for Hyland. Currently projected to be an early second-round pick in a number of NBA mock drafts, the sophomore would achieve a dream he has had for many years prior to his arrival in Richmond. To be an NBA Draft selection would also complete one of the most difficult journeys a student-athlete will have gone through.

Growing up in Wilmington, Del., Hyland did not come from an easy background as his family struggled financially most of his life. His escape was basketball and he turned his ability into a starring role at St. George’s Technical High School where the guard put up ridiculous numbers his junior season including 27.8 points, 6.6 rebounds, 5.8 assists and 4.0 steals per game.

Though things were looking up for the young athlete to make the jump and help his family, tragedy struck. On March 25, 2018, Hyland’s Wilmington home caught fire forcing the star junior to jump from his second floor window to safety. The guard tore his patellar tendon from the jump, forcing him to miss six months to recover, but he lost even more as his grandmother and 11-month-old cousin were both killed due to complications from the fire.

This is why March is so important to him and why missing out on March Madness hit especially hard for Hyland.

3 years ago I was sitting in my room watching March madness when a fire had broke out in my house.. & I lost two of my family members.. Broke my soul into pieces but I’m still standing like a soldier and March madness is here now. And best believe I’m going out wit a bang!!

Somehow, Hyland was not only able to recover from his injury, but also from his grief to become the best player in Delaware as a senior. During the campaign, the guard would score 26.6 points, 6.6 rebounds, 4.6 assists and 3.4 steals per game on his way to leading the Hawks to the Delaware Interscholastic Athletic Association semifinals. His outstanding play would also earn him the 2019 Delaware Player of the Year by USA Today and the Delaware Sportswriters and Broadcasters Association.

Family 4eva! Once a hawk always a hawk!! Was at the lowest of my life when that tragedy happened & one thing you guys did was support and be there for whatever I needed & that meant the world to me! I can’t thank you guys enough for all the love and unconditional support 💚💙 pic.twitter.com/D4zQ2lJbJj

As a four-star prospect, Hyland would have a number of Division I offers, but would ultimately choose VCU and fans everywhere can see how that went for him. Now, Hyland will look to complete the comeback of all comebacks during the NBA Draft in July.

With all that he has been able to accomplish in his difficult life, Hyland certainly knows how to deal with adversity. For whichever team is fortunate enough to select the star guard, they will be getting more than just a great player.

Just wish you was here to see it all baby.. Ima make it happen granny I promise 🤞🏽❤️