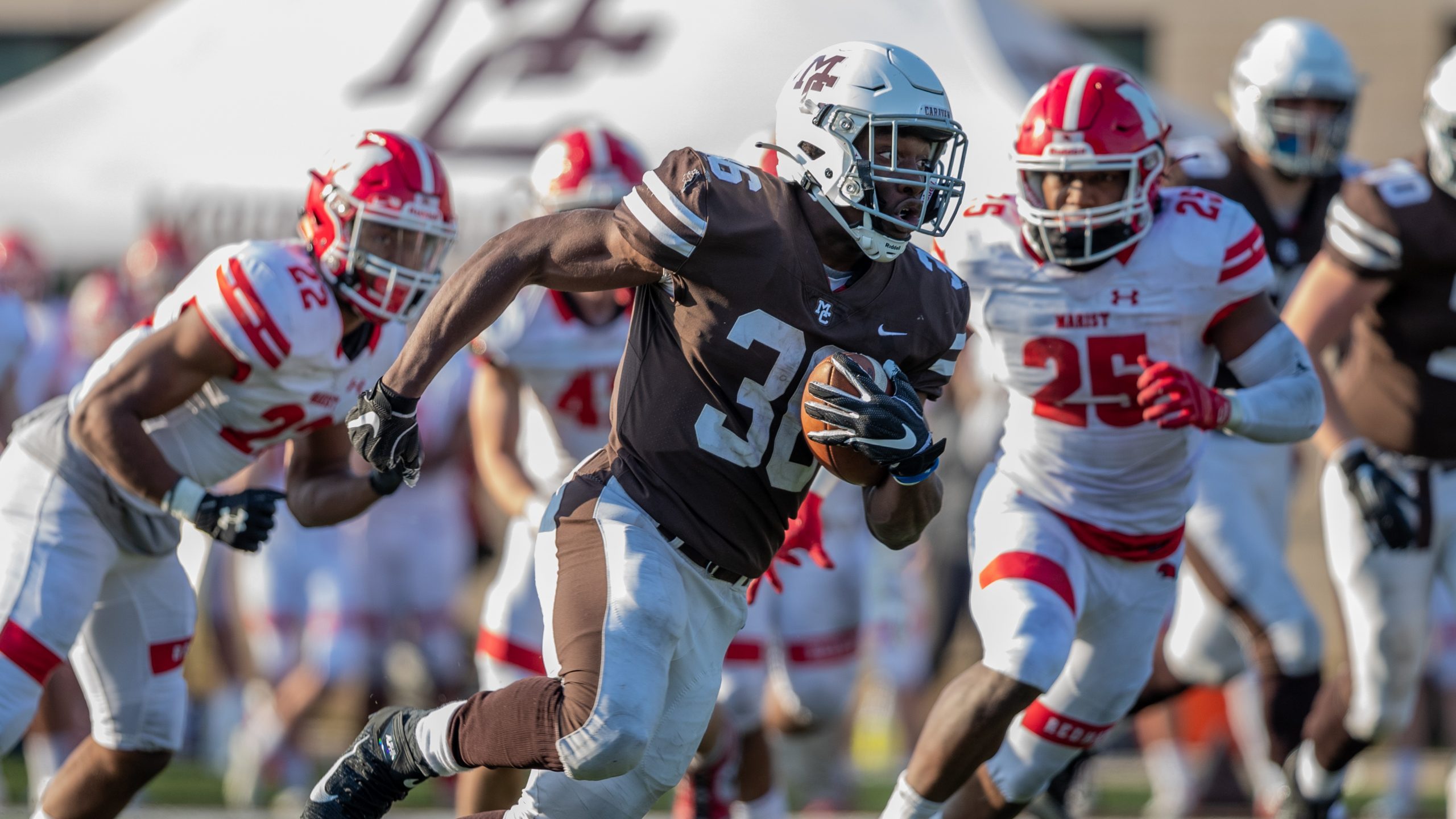 After a spectacular high school career at Mount Carmel, Kenenna Odeluga will soon be taking his talents to the Illinois Fighting Illini. (Photo: Jerrold Berry/Alpha Photography)

CHICAGO (BVM) — Kenenna Odeluga wasn’t always on the radar of a Big Ten school. In fact, he was originally committed to Penn to continue his football career at the next level.

Odeluga began getting officially recruited after his sophomore year, and many Power 5 schools did show interest in him. However, when it came down to offers, Odeluga was disappointed to see most of those schools not follow through.

“I was a bit disappointed that the Power 5 schools that were talking to me didn’t take that leap of faith and offer me,” Odeluga said. “I took it more upon myself saying I could have done stuff better, but in the end, you can’t control those things.”

His first official offer came from Northern Illinois University to play running back, and he received many more from several Mid-American Conference and Ivy League schools. So, Odeluga decided to make the best of what was in front of him, and as someone who values his education, looked towards the Ivy League.

Odeluga decided to officially commit to Penn last year, and was set for a future at linebacker with the Quakers.

“Penn offered me a chance to play and we talked with them, liked what they had to say and liked the fit,” Odeluga said. “I played the cards that were dealt to me and felt it should be good.”

However, deep down, Odeluga was still unsure of his choice, and still striving to play at a higher level.

“In my heart of hearts, I knew it wasn’t where my initial desire was to be,” Odeluga added.

But moving forward a couple months, just weeks before his final high school season, Odeluga finally got the call he was waiting for. With Bret Bielema joining the Illinois Fighting Illini, there is a renewed sense of focus from the blue and orange to recruit in-state talent.

The Illini coaching staff reached out to Mount Carmel to discuss Odeluga, and going through that process before, the senior football standout didn’t think much of it. But as they continued to stay in touch, Odeluga realized his Power 5 football dream may soon become a reality.

“I’ve been through the recruiting process and know how nothing actually comes out of some of that interest,” Odeluga said. “But a couple days later, I got on the phone with them … after that I started thinking they might actually want to offer me. One day they called and said they wanted to offer me. From then on, we decided we were going to go to U of I.”

It’s a dream come true for Odeluga, and fairly rare for an athlete to be offered so late in the recruiting process. But now, the Mount Carmel senior has the opportunity to play Division I, Big Ten football, and also receives the distinction as Bielema’s first in-state recruit.

“Being able to play Big Ten, Power 5 football is something that I’ve always wanted to do,” Odeluga mentioned. “There’s just something about the competitiveness and atmosphere of it that is unrivaled.

“Being his first in-state recruit is a humbling thing. Everything comes back full circle because I got my first offer from an Illinois program. Being his first one puts a lot of onus on me, but in the end, it’s always about playing a team game and playing the role the coach wants you to play. In the end, the game of football doesn’t owe anything to anyone. Being able to play is a privilege.”

The future ahead at Illinois is bright for Odeluga, and he has displayed tremendous talent on the field throughout his young football career, particularly in high school at Mount Carmel.

In third grade, Odeluga first became interested in football after his parents bought him the Madden 12 video game. A year later, Odeluga got his first taste of the gridiron with the Munster Mustangs.

Initially, he began playing as a tight end and defensive end. After scoring a touchdown in his first career game, Odeluga was even further hooked on the sport.

As he went through his middle school years, Odeluga settled into his current positions of linebacker and running back, and has excelled in both spots at Mount Carmel.

The football standout hit the ground running at the beginning of his prep career, playing primarily running back and helping the Caravan to a league title as a freshman. As a sophomore, the script was flipped. Moving up to varsity, Odeluga played primarily linebacker.

It was also his first chance to play under new head coach Jordan Lynch. A former Northern Illinois University standout and Heisman Trophy finalist, learning the game under Lynch has been a true honor for Odeluga.

“Coach Lynch has been a great guy for us and he’s helped us win,” Odeluga noted. “He introduced our offense in a more modern way and brought it up to speed a little bit. It’s fun to go into practice and see what he’s cooked up each week.”

The Caravan would finish the 2018 season by losing in the state semifinals. While frustrating, it added fuel to the fire for Odeluga and his Mount Carmel teammates.

As a junior, Odeluga was installed as Mount Carmel’s starting running back while maintaining his role on the defensive end. The standout ended up rushing for 1,151 yards and 11 touchdowns, helping lead the Caravan back to state. This time, they would not disappoint, winning a Class 7A state championship.

“Junior season, the right pieces fell in with us,” Odeluga said. “We had exceptional seniors, juniors that stepped up, and we were able to just keep chugging along. We kept progressing and that all culminated in our state championship. It was a great way to cap off our season and we really showed the state what we had and what it meant to be a team.”

Of course, over the past year, the high school sports landscape in Illinois has been anything but normal. Late in the summer, Odeluga and his teammates found out they would not get a chance to defend their state title last fall. The senior saw it coming, and remained eager for a potential spring season, continuing to work on his skill and body.

By late winter, Mount Carmel found out they would have an abbreviated spring season. With the campaign now wrapping up, Odeluga is just happy to have been able to play one final time at Mount Carmel with his Caravan teammates.

“The spring season has been a great way for us to play as a team one more time,” Odeluga said. “We’re always improving at practice and in games which is good to see.”

With his high school career wrapped up, it is time for Odeluga to put his sole focus on the Fighting Illini. While he is excited for the football portion of his college experience, Odeluga has always valued his education, something that goes back deep into his family’s roots.

“Education value is something that we hold as a high standard,” Odeluga said. “If it wasn’t for education, we would not be who we are as a family.”

Odeluga will join the Gies College of Business at Illinois, and may have a future career waiting for him in that field in four years. He also could have an opportunity to continue his football career professionally at that point. But for now, Odeluga is just focused on taking things one step at a time.

“I’ve always liked to take football one day at a time because you never know what can happen,” Odeluga concluded. “I want to play football as long as I can. The game has been good to me, it gives me joy, it gives me a reason to wake up at 5 a.m. and go to workouts. That grind is something that only can be done if you’re playing a game you love so much. I want to play as long as God wants me to in whatever capacity and keep having fun.”