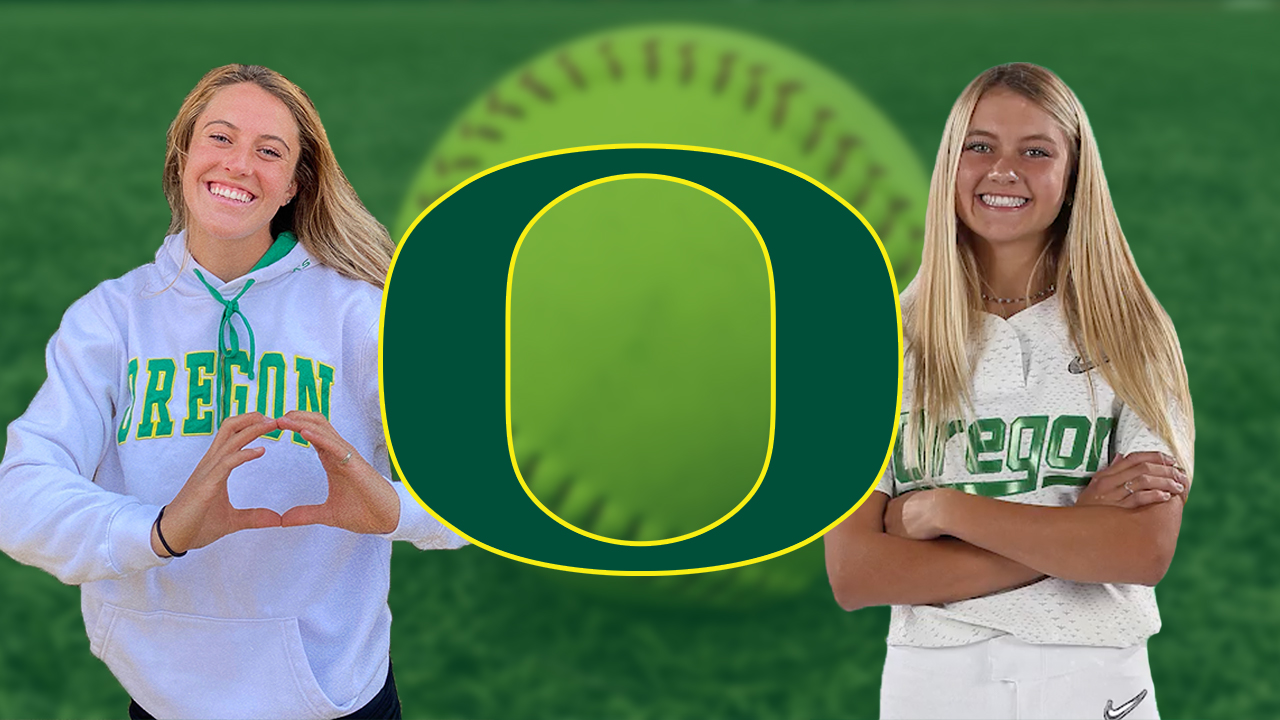 Kailee and Kedre Luschar, two of the most accomplished softball players in Carson City history, will suit up for the same team again next season at Oregon. (Courtesy: Mike Cianciolo and University of Oregon Athletics)

CARSON CITY, Nev. (BVM) – The last time Kailee and Kedre Luschar were on a team together, the sisters led Carson High School to a 23-9 record and a No. 7 ranking in the state of Nevada in 2019. It was Kailee’s team-high 35 stolen bases that made her a threat whenever she reached base, and Kedre’s team-high 49 RBIs and 11 triples that put fear in pitchers’ hearts whenever she stepped to the plate.

Kedre has been committed to play softball at Oregon for over a year, and it appeared the days of playing alongside her sister were over when Kailee committed to Arizona State. But that was until Kailee’s fall semester in Tempe wasn’t what she envisioned.

“ASU wasn’t a good fit for me at all,” Kailee said. “Then when I entered the (transfer) portal and Oregon reached out, it was a no-brainer. They went to Kedre first to make sure everything was OK with her, then after that, I wasn’t really looking anywhere else. I just knew that’d be perfect.”

Big-time addition to next year's incoming flock of Ducks 👊.

The Ducks will be getting a multi-talented ballplayer in Kailee who has a rare combination of speed and power. Named the Nevada Gatorade State Player of the Year following the shortened 2020 season, Kailee finished her career at Carson City with a .505 batting average and 88 stolen bases over three seasons.

She was ranked No. 97 in Extra Inning Softball’s final rankings for the Class of 2020 and will become the fourth top-100 player from that class on the Oregon roster, joining current freshmen Tehya Bird, Raegan Breedlove and Alyssa Brito.

“Kailee is an extremely versatile athlete and will help us at numerous positions on the field,” Oregon assistant coach Justin Shults said in a press release. “She will add a strong left-handed bat and will provide power and speed for us.”

It’ll be a Luschar family reunion in Eugene in 2022, but Kedre is currently busy wrapping up her senior year with the Senators. Carson City sits at 6-2 after a 7-3 win over McQueen on Tuesday, and she is a big reason why.

Adding some speed and and left-handed pop to the class 👊.

Kedre leads the team in batting average (.600), runs scored (16), hits (18), triples (3) and stolen bases (15). After Kailee had her senior campaign taken away due to COVID-19 and injury (a torn labrum which she has completely recovered from), Kedre is grateful to have one final high school season with her teammates.

“It feels awesome to play again,” Kedre said. “It just felt weird not playing the sport that I’ve been playing since I was tiny. I love being out on the field.”

It was the Ducks’ coaches, players and atmosphere that drew Kedre to Oregon, but it was mainly Kedre who brought Kailee to Eugene. Now, those two hope their sibling connection will help translate into more wins for head coach Melyssa Lombardi and the crew.

“That’ll be fun (playing alongside Kailee),” Kedre said. “We just make a good pair together, hitting wise and in the field. We both complement each other well so it’ll be a fun time.”

The shared objectives for the Luschar sisters are rooted in continuing to play the sport they love at a high level and bringing a national championship to Eugene.

Oregon is currently 30-10 this season and begins a four-game series with No. 12 Arizona State on Friday. Kailee will be in Tempe for this matchup, and she can’t wait for future meetings with her former school.

“I’m super excited (for future matchups with ASU),” Kailee said. “I think by then it’ll be a very, very fun series.”