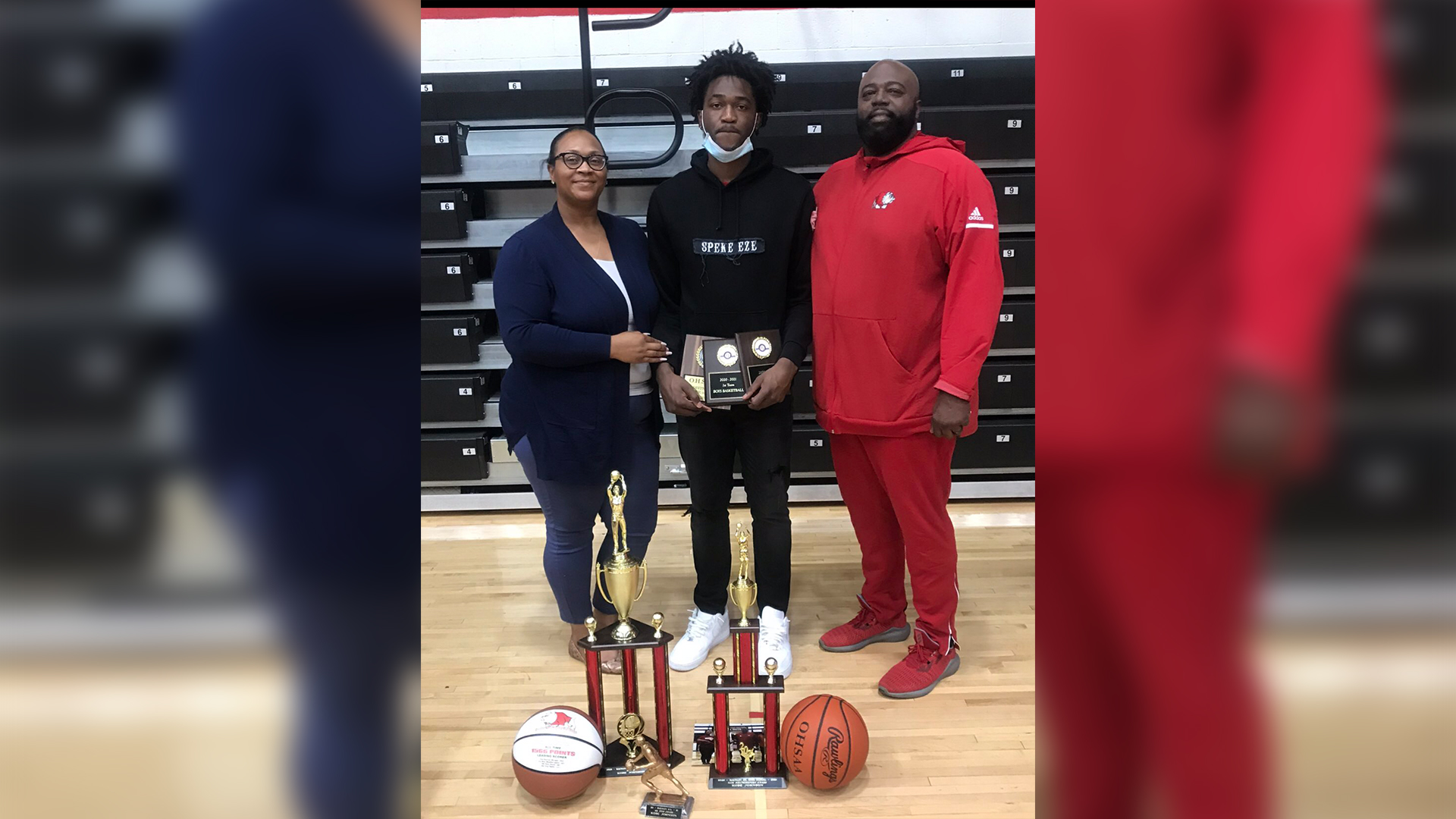 Kobe Johnson, center, took home plenty of honors during his time at McKinley, and was named the Division I boys basketball player of the year in Ohio after his senior season. (Courtesy: @KobeJohnson930/Twitter)

CANTON, Ohio (BVM) — Kobe Johnson’s elite talent on the hardwood has never been a secret. He has already made plenty of noise within the state of Ohio, and soon will do so in West Virginia. In a season that was different than most this winter, Johnson continued to show why he is one of the best prospects in the buckeye state.

Johnson was destined for a life on the hardwood thanks to some good genes. His mother, Karissa, played high school basketball at GlenOak. Meanwhile, his father, Chet Harper, scored over 1,300 points playing at Alliance High School. He would later go on to play junior college basketball in Iowa, and now has had the opportunity to serve as an assistant coach for Kobe and the McKinley program.

“Watching my dad play and going to the high school games that he coached, I really fell in love with it,” Kobe said. “I wish I could have seen him play in high school and I heard he was a really great player.

“Having him by my side and training me when I was little just made me a good player and helped me with the fundamentals. My mom played basketball and has always taken me to the gym, too.”

Over the years, Kobe has become a true playmaker who is a special talent with the ball in his hands. He has grown up watching and idolizing basketball legends such as Kobe Bryant and Kevin Durant.

It didn’t take long for the basketball standout and others to recognize his special talent on the hardwood. Growing up playing AAU basketball, specifically with All-Ohio Red over the last several years, has shown Kobe’s game is at an elite level.

“Around sixth grade, I realized I was going to be pretty good,” Kobe said. “Coming up playing for All-Ohio and playing against the top guys helped me a lot to see where my game was at.”

The 6-foot-4, 210-pound combo guard continued his success right away at Canton McKinley Senior High School, averaging nine points per game as a freshman while showing his future potential.

As a sophomore, Kobe would get his first chance to learn under Andy Vlajkovich, who was hired by McKinley prior to the 2018-19 season. The basketball standout continued to improve during his sophomore season, but it was his junior year where he officially broke out.

Helping McKinley to three postseason victories including a district championship, Kobe morphed into a first-team All-Ohio player averaging 18.8 points per game along with four rebounds and three assists. The guard shot 49 percent from the floor, including 36 percent from 3-point range and 79 percent from the free-throw line.

“We had a good run that year,” Kobe said. “We came together and found it.”

After that season, Kobe’s recruiting also began taking off. Already holding around a dozen offers from mid-major programs, the McKinley standout began hearing from Power 5 schools such as Ohio State, Wisconsin, Maryland, Northwestern and St. John’s.

Kobe initially looked at continuing his career with some Mid-American Conference schools and other lower level DI spots such as Duquesne. However, there was one school that ultimately set itself apart from the rest once the Power 5 interest started rolling in: West Virginia.

“I started talking to West Virginia during my AAU junior season and they offered me that summer,” Kobe said. “Once I talked to Coach Huggins, I really fell in love, liked what they do and went out to the campus and viewed it. That’s when I decided.”

Now, Kobe will have his chance to play for a legendary coach in Bob Huggins, and a perennial Big 12 power where he hopes to keep the success going.

“I get to play for one of the greats,” Kobe said. “He’s very demanding, but I feel like that’s something that I need.”

Kobe himself is one of the top guards in the 2021 class in Ohio. But he will join forces at West Virginia with another top in-state talent, Lorain’s Seth Wilson.

“I’ve known Seth for a while but we didn’t really get to team up,” Kobe added. “I’m excited to get to team up at West Virginia and see what we can make happen.”

With his commitment to West Virginia locked up, Kobe was able to focus on continuing his success at McKinley this past winter. Averaging over 20 points per game while increasing his shooting percentages to 51 from the field and 40 from 3-point range, Kobe helped McKinley to a 17-7 record, Federal League championship, and district runner-up finish.

Kobe also had some impressive individual accomplishments. He passed fellow McKinley star and former Michigan State player Raymar Morgan as the program’s all-time leading scorer, finishing his career with 1,566 points. In addition, he was named Division I Player of the Year by the Ohio Prep Sportswriters Association.

“We fell a little short and I wish we could have gone a little further,” Kobe said. “I had a good season, but always feel like I could do better. It was special to break the scoring record, that night wasn’t too bad. I wasn’t necessarily worried about the record as much as I was getting the W.

“Coach ended up telling me I won player of the year and that was one of my goals. I was very happy and glad that I won it with all the hard work that I put in for that.”

After ending his high school career on a high note, Kobe plans to start and finish his college tenure the same way. Then, the goal is a professional career at the highest level.

“I’ve always dreamed of playing in the NBA,” Kobe said. “A lot of work has to happen for me to get to that level. I accomplished high school. I have to accomplish college. Then the next level will be the NBA.”