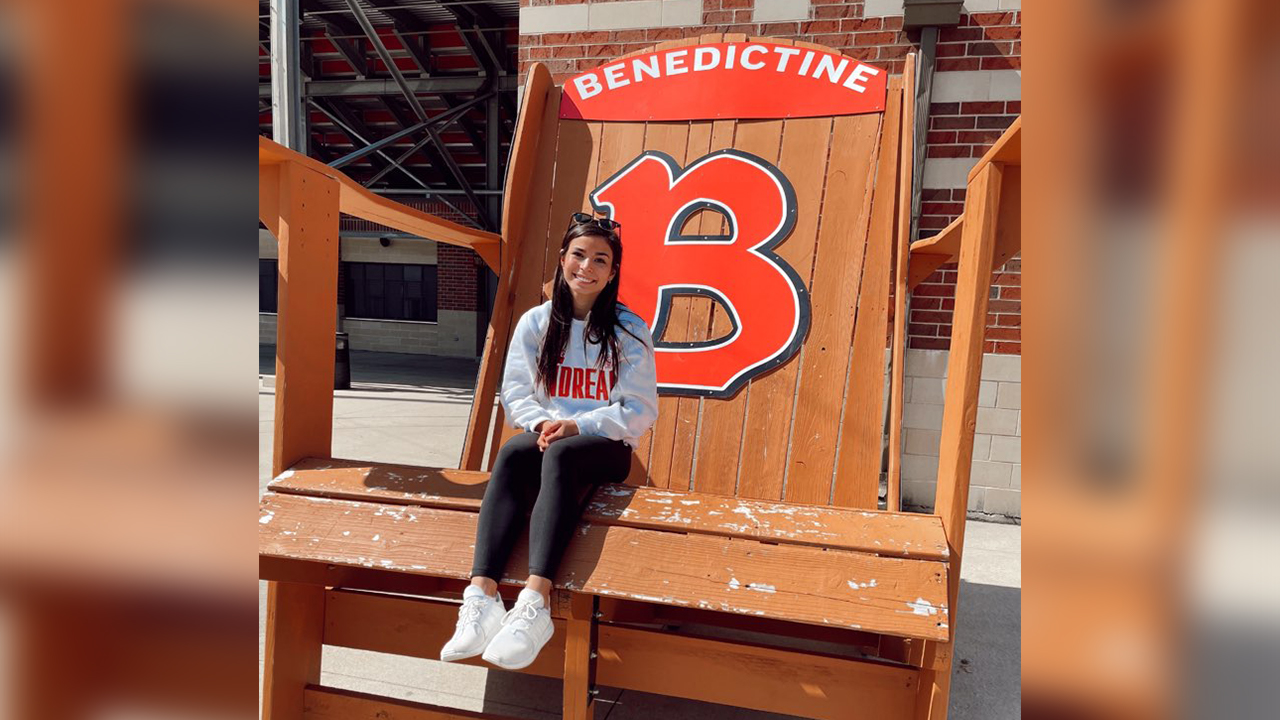 Leah Navarro will take her softball talents to Benedictine University once her career at Andrean High School is wrapped up. (Photo: Felix Navarro)

MERRILLVILLE, Ind. (BVM) — Leah Navarro has been a softball star over the last few years at Andrean High School. But her senior season has had a different feel than most due to what she and her family are facing off the field.

On Dec. 19, the entire world changed for the Navarro family as Leah’s mom, Kimberly, was diagnosed with breast cancer just one day before her 50th birthday. Going in for a routine mammogram just a week or two prior, the diagnosis was a true shock.

“She went to her annual mammogram and they found a mass,” Leah said. “We just thought don’t immediately think of the worst until we have to. Then we got a phone call on Dec. 19 and they told her she had been diagnosed with triple negative breast cancer which is a really rare and aggressive form of cancer. We were just in shock and obviously sad and I think my mom was in denial for a little bit.”

It wasn’t before long that Kimberly began chemotherapy treatments. She is continuing them currently, but Leah and her family remain positive throughout this difficult process.

“My mom holds herself up pretty well and is really positive about it,” Leah mentioned. “Our family is pretty positive about it and we’ve had so much support from family and friends. We’re just appreciating the little things while we have them. We don’t really look at it as a negative thing and the doctors say that they have really high hopes for my mom and have no doubt she’s going to get through this.”

Throughout the latter portion of 2020, it seemed like everything was snowballing for the Navarros. Both of Leah’s grandparents were in the hospital with COVID-19, with Kimberly going back and forth to take care of them.

At the same time, Leah was struggling with the fact that she might not have a high school softball season once again due to the continued threat of the pandemic.

“At that point we weren’t really sure if we were going to have a season again,” Leah explained. “So we were just going through a lot and it was just bad timing for all of this to happen right then and there.”

However, as winter has turned to spring, things have begun to look up for Leah and her family, as she is back on the softball field while her mom continues to recover.

Leah first began playing softball during her youth in large part because of her mother. Kimberly played softball collegiately at South Suburban College, and was a star pitcher during her playing days. Now, Leah has followed in her footsteps.

“My mom played so that had a big factor in it,” Leah said. “My mom pitched and gave me a lot of critiquing growing up. After every game, my mom tells me a story and we talk a lot about pitching.”

Throughout the last several years, Leah has turned into a star in the circle just like her mom. However, that was not always the case, as it took a heartbreaking moment around age 8 for Leah to realize where she wanted to go in the sport.

“I went to all-star tryouts and I was waiting for about a week to find out if I made the team or not,” she said. “When we got to the field the week after when tryouts were posted, I immediately got out of the car and sprinted to the concession stand. I saw my first name but then moved my finger to the right and it wasn’t my last name, it was a different girl named Leah. I was obviously crushed. After that, for about a week, I was crying but my dad finally had enough and said I was going to make all-stars next year and asked what position I wanted to play. I immediately said pitcher and I have no idea why I said pitcher.”

Leah practiced every day until the following year’s tryouts. She made the team the next season, pitching in every game, and has never looked back.

The 5-foot-2 pitcher has not only followed in her mom’s path by playing the same position, but also by wearing Kimberly’s patented No. 28. Now, Leah continues to keep the family legacy going through that number.

“The number is a big part of our family,” Leah said. “Everyone in my family calls me 2-8. At my house, my name isn’t Leah, it’s 2-8. My mom gets called 2-8 senior and my dad says if I get that number in college he will get a tattoo of it which is really funny because my dad is definitely afraid of needles.”

It won’t be long before Leah does head off to play college softball, which she will do in Illinois at Benedictine University. While she had several Division III and NAIA offers, Benedictine ultimately felt like the best fit.

“Benedictine checked off a lot of boxes for me and with this happening with my mom, one of the boxes was having somewhere close enough to where if I need to come home, I can,” Leah said. “I also wanted to go somewhere that just had a good environment on their softball team. When I finally got to meet the coaches, I just knew that’s where I wanted to be.”

Off the field, Leah will study business administration at Benedictine. On the field, she hopes to help lead the Eagles to success. Beyond, she would like to coach a high school softball team someday, perhaps in one of her favorite states, Tennessee.

But first, Leah will conclude her prep softball career at Andrean High School. Right off the bat, Leah’s freshman year didn’t start too well, giving up several runs in her first pitching appearance. But even though the team started 0-8, Andrean would end up going all the way to semistate that season.

After leading the conference in strikeouts as a freshman, Leah continued to improve as a sophomore, becoming a second-team all-conference performer for the 59ers. However, Leah’s momentum would be halted in 2020 when her junior season was canceled.

“We finally got the news that our season was canceled and I just remember sitting on the couch in shock,” Leah said. “I think I started crying a few days after because I was just like there is no way this is real.”

However, the adversity motivated Leah, as she continued to workout at home throughout the spring and summer, staying in shape and sharpening her skills.

“I just kept doing stuff on my own and figured it out as I went along,” the Andrean senior said. “Just because my season was canceled didn’t mean softball was canceled.”

This spring, Leah and her 59ers teammates have had the chance to return to the field, and the pitcher’s work from the offseason has paid off. Andrean has been ranked as a top-five team throughout the season in Class 2A by the Indiana Coaches of Girls Sports Association as Leah continues to pitch strong outing after strong outing. Now, she hopes to cap off her Andrean career with a deep postseason run.

“We truly have a good group of girls this year and I think we will go far in the postseason, hopefully to state,” Leah said. “I think our freshmen are coming around well and we’re all excited to be there. When we’re having fun and the energy is up, we play our best.”

It would be exciting for Leah and her teammates to make a run to state. But the ultimate win for the senior pitcher and her family will be the day her mom is declared cancer free. Currently, Kimberly is in her second round of chemotherapy, and will have surgery afterwards, providing a light at the end of the tunnel.

Leah and her entire family have plenty of optimism and hope that the day Kimberly is declared cancer free will come soon, and the experience they are going through has given Leah in particular a new perspective on life that she will always take with her.

“With my mom, playing has really lit a fire under me,” Leah said. “Now, I feel like I have a bigger purpose than me and my mom loves seeing me play.

“Seeing the end of this is kind of eye-opening and exciting. Obviously chemo is not easy, but it definitely makes me and my dad feel a little better that this is close to being over. You just have to keep looking at the positive things, what you have and basically count your blessings. You never know when it can be taken away, so appreciate all of the little things.”