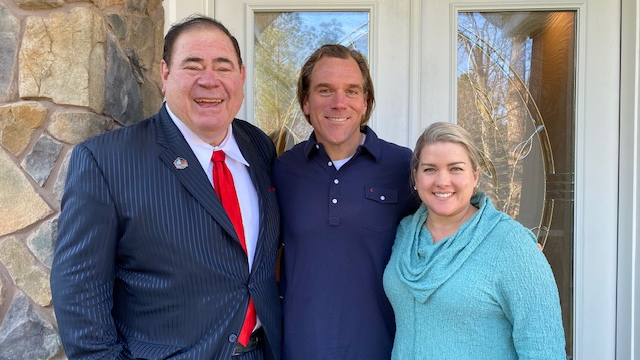 Faneca, center, joined by his wife, Julie, right, and Pro Football Hall of Fame’s President & CEO David Baker, left, following his Hall of Fame “knock” in February. The Hall of Famer was named the newest head football coach for Cox High School on May 10. (Courtesy: @afan66/Twitter)

VIRGINIA BEACH, Va. (BVM) — It has been 11 years since Alan Faneca last buckled the chin strap in the NFL and soon the former great will be able to celebrate his on-field career as a member of the 2021 Pro Football Hall of Fame Class. However, before he gets to enter the hallowed halls in Canton, Ohio, Faneca will make his return to the gridiron, but not in the NFL.

On May 10, Frank W. Cox High School announced that Faneca would become the school’s next head coach after serving the past year as an assistant coach with the program. Faneca will take over for Bill Stachelski who left the program in late April. Stachelski coached the Falcons for 13 seasons and finished with an overall record of 88-47 while guiding the Falcons to 11 playoff appearances and their first playoff victory in program history in 2015.

We are excited to announce that our next head football coach will be Alan Faneca! Coach Faneca played college football in the SEC for LSU, spent 13 years in the NFL (mostly with the Steelers), where he was named to the pro bowl nine times, and won a Super Bowl ring. Welcome! pic.twitter.com/rF8CRud5PU

Faneca will have big shoes to fill, but if anyone can do it, it’s the former offensive lineman.

During his time in the NFL, Faneca became one of the greatest interior offensive linemen the league has ever seen. The New Orleans, La. native, was drafted by the Pittsburgh Steelers in the first round of the 1998 NFL Draft out of home-state power LSU. From that moment forward, the 6-foot-4, 322-pound Faneca would simply dominate as he would earn six All-Pro honors, nine Pro Bowl honors and become a member of the NFL’s All-Decade Team of the 2000’s after he played in 206 games over his 13 seasons where he was a lead blocker for nine 1,000-yard rushers and five 3,000-yard passers. Faneca would play in four AFC Championships and win Super Bowl XL with the Steelers in 2005.

I knew we had them, I made my block and spun around do I could watch Willy take it to the house. #SBXL #HereWeGo pic.twitter.com/om0ULUpgoz

Faneca was inducted into the Hall of Fame in his sixth year as a finalist this February.

Now, Faneca will look to maintain the success that Stachelski, the winningest coach in program history, has provided for the Falcons for more than a decade. During the spring season this year, the Falcons finished with a 5-1 record with their only blemish coming in a loss to Deep Run in the Class 5 Region A semifinals. Faneca worked as an assistant coach on the team’s staff this past season.

So proud of these guys last night. We lost 10 guys, almost all lineman, due to Covid contact the day before the game. Could have justifiably forfeited, but didn’t. Guys playing new positions and going both ways all over the place. VICTORY 42-6 All Heart! Go @FrankWCoxHS! pic.twitter.com/8ZbuoTzytR

With a Hall of Famer now on the sidelines, there will be plenty of excitement surrounding the Falcons program when the team returns this fall. Perhaps it is Faneca himself who best summarizes what he has to do as head coach in his quote on his Hall of Fame page.

“You got to perform to be a leader,” Faneca said. “You have to. You can’t really say much when you’re not really doing it yourself. You got to pull your own weight and show what you’re willing to do to get others to follow.”

It will be that type of leadership that Faneca will bring to the Falcons and, if he performs well, his team will surely follow.