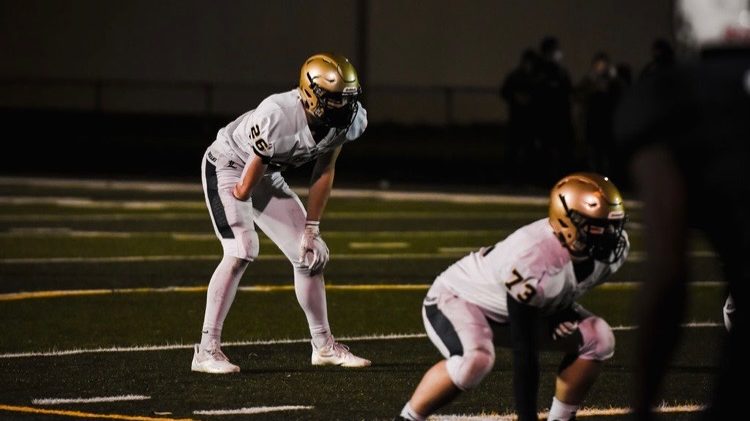 Although he is missing part of his right arm, Albert Kunickis has still starred at running back for Lemont High School. (Courtesy: Photo Stories Inc.)

LEMONT, Ill. (BVM) — Albert Kunickis is a junior running back at Lemont High School. He is fresh off a six-game spring campaign in which he performed well on the field yet again.

But when opponents line up across from the standout running back, they may notice something different about him: Kunickis is missing his right arm from the elbow down.

The running back began playing football around fifth grade, joining a host of other sports he competed in. After watching some NFL games — particularly a Saints game which involved one of his favorite players in Drew Brees — Kunickis was hooked.

“My first NFL game that I watched was the Saints vs. the Eagles in the 2013 playoffs,” Kunickis said. “Every single pass Brees threw was right on the money and it just inspired me.”

Watching his older brother play in their local youth league, Kunickis decided he would try out the sport for himself. Since, he has turned into a solid running back with many attributes including trucking ability, vision and cutback ability. He has even looked to model his game after another Saints star, Alvin Kamara.

“When he came into the league in 2017, he blew my mind,” Kunickis said. “I was impressed with his game.”

Kunickis was born without the bottom half of his right arm, and by the time he was old enough to realize it, it did make simple things tough and sometimes frustrating.

“It was a little bit tough with specific things such as tying my shoes or climbing the monkey bars,” Kunickis explained. “But I never let it stop me and used it as motivation to keep going even further.”

By the time he began playing football, Kunickis was initially put on the line. But it wasn’t before long that he found his home at running back, and he was noticed early on by many for his play on the field. Right off the bat in his youth career, Kunickis had an impressive three-touchdown performance.

Throughout his time playing in junior high, he continued to show that it would take multiple tacklers to take him down. One of those who noticed his talent right away was his now head coach at Lemont High School, Bret Kooi.

“He was part of our pop warner program,” Kooi said about first seeing Kunickis play. “I saw him playing then and he was one of those kids that 100 percent caught my eye. He had that wow factor. He runs the ball hard, he plays the game hard and you give the kid credit for just being a good, solid football player.”

Kunickis has not slowed down at all through the years, and continues to play the game hard each time he suits up for Lemont. Part of that comes from the mindset he uses when taking the field.

“I always think to myself that there will obviously be a lot of doubters and that I definitely need to prove them wrong and get their respect,” Kunickis noted.

This past spring, Kunickis continued to shine on the field at Lemont. Adding about 20 pounds to his frame, the already powerful running back continued to come into his own, and proved he has a bright future in the sport.

“He’s developing exactly where we’d like him to be,” Kooi said. “He’s one of those guys that gives you the most out of what you give him and works his tail off. He’s getting stronger and is that type of running back that runs with a punishing style. The extra bulk and strength compliments him.”

“Going into the offseason, I knew my goal was to get better as a football player,” Kunickis mentioned. “When Covid struck and we got the extended break, I knew that it was my time to shine, so I got in the weight room and got a bunch of weight added on to me.”

The results paid off, as Kunickis had 10 total career touchdowns in his first two seasons at Lemont, but matched that total in a shortened six-game schedule as a junior this spring.

Not only is Kunickis a star in the backfield, but he is also a kicker with a very strong leg. The junior has made multiple 55-plus yard field goals in practice before, and soon hopes to convert from even deeper.

“I like kicking a lot, it’s really fun,” Kunickis noted. “If I got a Division I scholarship to kick, I would definitely consider it. I’m looking to expand my range and kick a field goal further than 60 yards.”

A Division I scholarship and being able to continue his football career at the college level is something Kunickis is certainly looking towards. If he continues the path he is on, it looks like that dream will soon become reality.

“I definitely think I can because of my mental focus and determination to get better at the sport,” Kunickis said about playing college football someday. “I have a lot of time to prepare. If I had an opportunity to do that, I would work my tail off and make the best I can out of every situation. I would just tell any program that I’m ready. My confidence is very high and I have all the tools and physical attributes to play at the next level.”

Coach Kooi is also confident that Kunickis’ game will lead him to a collegiate career.

“I’ll be disappointed if he doesn’t get an opportunity at the next level,” Kooi said. “I’m positive someone is going to give him an opportunity. He puts all the questions to rest when you see him do what he does, and I think somebody is going to see that.”

With his arm limitation, perhaps one thing that coaches question is Kunickis’ ability to catch the ball out of the backfield. However, Kooi notes that it is not a factor at all.

“He catches the ball as good if not better than our running backs, and as well as our receivers have,” Kooi said.

Playing college football is certainly a goal, but Kunickis also has a long-term dream of taking his career even further.

“I think about that every day and I have been for maybe the last five, six, seven years,” Kunickis said about playing in the NFL someday. “If that ever happened, that’d be phenomenal.”

While a bright future lies ahead, Kunickis still has one more year to prove himself at Lemont. He hopes to continue to improve during his senior season, while Coach Kooi and the rest of his staff also expect big things.

“My personal goals are to have a better season than I did my junior year,” Kunickis said. “For team goals, I want to help get my team into the playoffs so we can get Lemont on the map.”

“We expect big things out of him,” Kooi added. “He’s going to be a huge part of what we’re trying to do next year and we expect him to be one of our key kids.”

The 2021 fall season will also give Kunickis one final chance to be coached by Kooi, who has really helped his development over the past several years.

“He’s a great head coach,” Kunickis mentioned. “He really focuses on helping me develop each year. He knows that when we come up to the junior and senior level on his team, he wants us to be the best player we can be.”

Kunickis’ incredible story continues to amaze anyone and everyone whether it is coaches, teammates, opponents or fans.

“He’s got that quality to him,” Kooi said. “I think kids feed off of seeing somebody work as hard and do what he’s capable of doing even with the limitation he has. He’s one of your top-echelon kids and the pedal is to the metal all the time.”

Now, he hopes to continue adding chapters to his story, while hopefully inspiring others who may even be in the same situation along the way.

“I hope that everyone who sees my story can benefit from it,” Kunickis said. “I always tell people to keep going and do what you think you can do, no matter what anyone else says.”