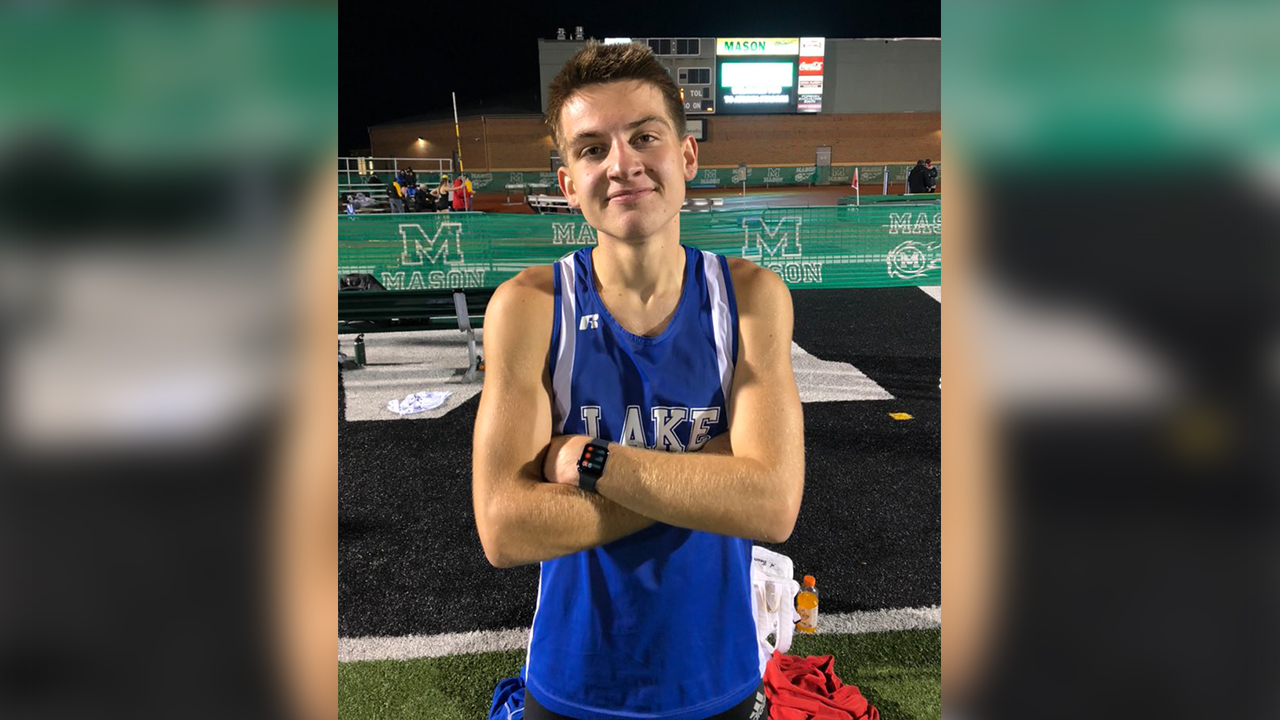 UNIONTOWN, Ohio (BVM) — Nathan Moore has always been a star distance runner in the state of Ohio. Yet, a state title seemed to elude him throughout his cross country and track careers at Lake High School.

A late bloomer to competitive running, Moore had just a couple years of experience when his career began at Lake. The main reason he got into it was thanks to his father.

“I was introduced to running by my father,” Moore said. “When I was growing up, he was getting back into running and doing all kinds of marathon races. That was a big inspiration to me to see that happening everyday and I thought that was the coolest thing in the world.”

Throughout his career, Moore has primarily competed in the 5K during the cross country season, and the 1,600 and 3,200 meter races in track. In his first ever cross country meet during his seventh grade season, Moore placed in fourth. It maybe wasn’t the first-place finish he was hoping for, yet the way it happened made him realize he may have a special talent.

“I was leading for the whole entire race against a team of seventh and eighth graders,” Moore said. “With about 100 meters to go I made a wrong turn and ended up placing fourth, unfortunately. It made me realize I was pretty decent at the sport and not winning that just kind of fueled me for the rest of the season and ignited my love for the sport.”

Moore not only began shining locally, but also displayed his talents on the national stage. As a freshman, he competed at the New Balance nationals, taking second in the “C” heat race while setting an all-time freshman record in the state of Ohio.

As he entered Lake High School, Moore realized he was stepping up in level of competition. But it didn’t take long for him to adapt, as he won a Federal League championship while qualifying for state in his first cross country season for the Blue Streaks.

While he finished 37th at state that fall, Moore would continue to get better and better during his first track season, where he won districts in both the 1,600 and 3,200m. With his name becoming well-known, Moore took a different mindset into his sophomore year of cross country. Winning his league once again as well as districts, this time the runner would finish ninth at state.

“I trained even harder, worked smarter and ended up winning league again, winning districts and making it to state,” Moore said.

During his track season, Moore continued to shine, winning districts, taking second at regionals and finishing third at state. Continuing to train prior to his junior cross country season, Moore was destined for a state title. However, he would come up just short.

“Losing that state championship was certainly disappointing,” Moore said. “But it definitely led to a huge leap in personal growth within my running and I became a lot better and a lot more motivated.”

Determined to come back stronger in the spring, additional adversity would strike for Moore as his junior track season was canceled.

“I trained really, really hard throughout the winter, and I was going all out ready to make my move, all motivated,” Moore added. “But unfortunately, COVID-19 came about and canceled our season. Track is something that I look forward to every year.”

Moore did not let the missed season affect him, however. By summer, he was ready for his final cross country season at Lake, and had plenty of goals set, including winning that elusive state title.

“The goals that I set for myself during the summer were to win a state championship and hopefully qualify for a national meet,” Moore said. “I put in the best summer of work I had ever accomplished.”

At the same time, Moore felt the weight and pressure of making sure he came away with a state championship before his high school career was done.

“There was a lot of pressure going into it,” Moore added.

Even with some increased competition, Moore still ran better than ever. Another great season led to a fourth state appearance, and this time, he came out on top.

“I ended up pulling away and when I crossed that finish line, it was the most incredible feeling I had ever experienced in running and certainly made up for all the work and sacrifice I had put in the last four years,” the senior said.

Currently, Moore is in the midst of his final track season at Lake. Last week, he raced some of the best competition not only in Ohio, but also West Virginia, and still came out on top as he continues to ramp up towards potentially adding another state championship to his resume.

However, this spring, Moore has already taken home one of the highest awards any high school runner can win, as he was named the Gatorade Ohio Boys Cross Country Player of the Year.

“I was at track practice when I found out,” Moore said. “My coach had a full case of Gatorade and said, “Hey, you won it.’ I was around all my teammates and we all went crazy. It was so exciting to find out and especially to be able to share that experience with all my teammates.”

He not only holds the 5K school record in cross country, but also the 1,600 and 3,200m records in track. In addition, Moore was named an academic All-Ohio runner five times in his career.

Winning the Gatorade award is often more about what an athlete does beyond sport as well. For Moore, he is an exceptional honor student with a 3.7 GPA. A talented violin player and pianist, Moore is also the CEO of his student-led company in Lake’s marketing program, and has spent numerous hours volunteering at his church over the last several years.

“They call it student-athlete for a reason,” Moore said. “I put school first and definitely work my hardest. A lot of volunteer work that I’ve done has been at my church and helping out the middle school program, making sure all those kids are doing well.”

There is no doubt Moore has a bright collegiate career ahead of him, and any school would be lucky to have him on and off the track. After some careful consideration, Moore has decided to stay close to home for college by attending Walsh University.

“I had a lot of interest from all kinds of Division I schools throughout the United States and Division II,” Moore said. “Unfortunately, I wasn’t really comfortable with pursuing a lot of those teams because at Division I, you weren’t able to visit campus this year. For me personally, it was a big deal to go and visit the school and get to know the team before I committed. I was able to do that with Walsh and it was a really big factor within that decision.

Moore will continue displaying his talents on the local scene at Walsh. He hopes to leave his mark at the university, but also maybe go further after his college career is done.

“I’m incredibly excited to get there, we have a really good team for us,” Moore said about joining Walsh. “My personal goals are going to be to make it to nationals and help my team there. They’re lofty goals, but I think they will be doable.

“My ultimate goal would be to pursue the sport at the professional level. I’m not really sure how it will look yet, I just know that I do want to compete at the highest level and be able to do really well there. I want to take the sport as far as possible but also want to keep having fun with it and keep making a difference.”