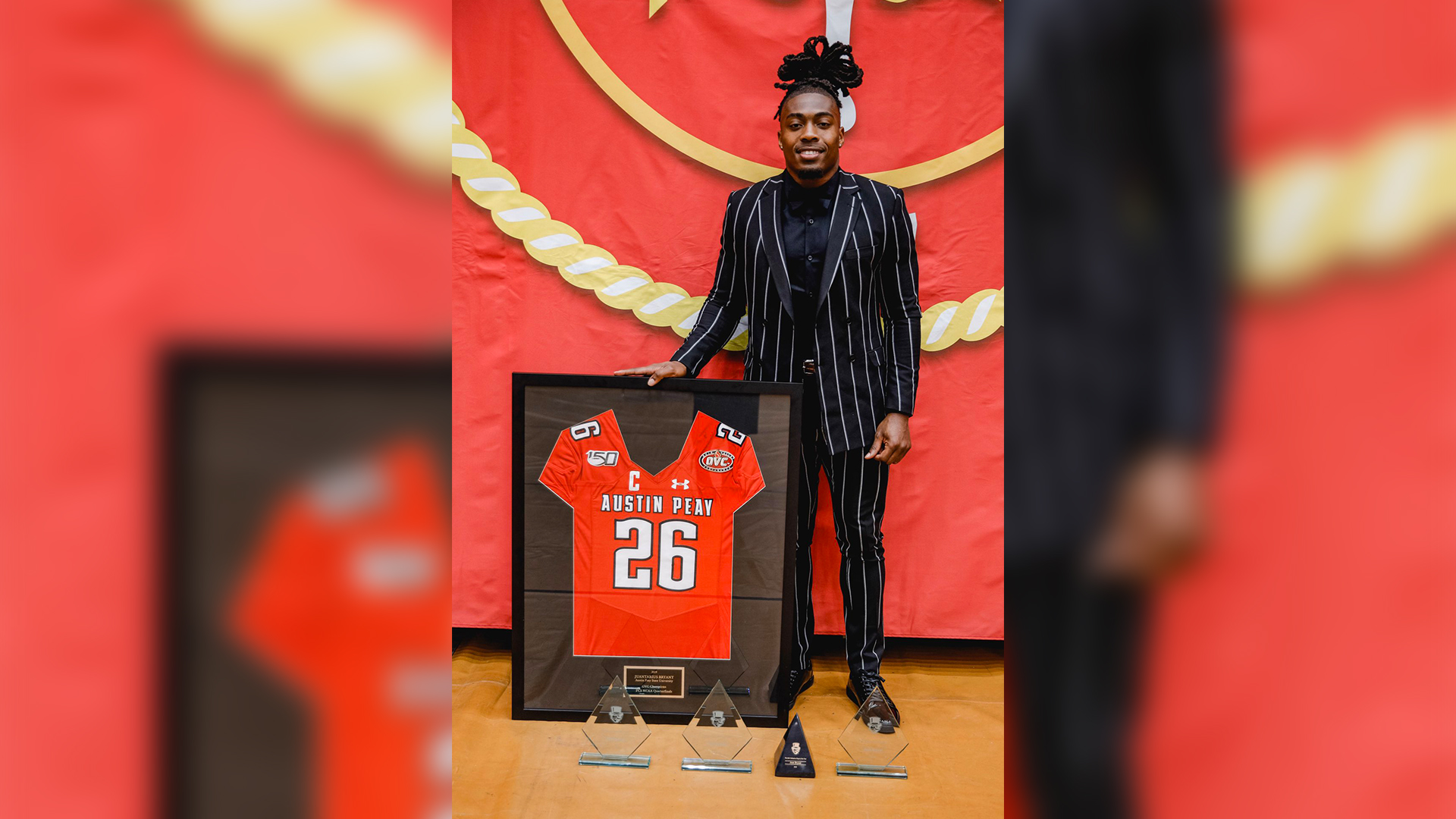 Juantarius Bryant has been an underdog before, making the Govs team after joining the program as a freshman walk-on. After word of him being hoaxed went national, Bryant will have a chance to get the last laugh as he participates in a HUB Football camp in front of NFL and CFL scouts on Sunday. (Courtesy: @TheyLoveMyHair_/Twitter)

CLARKSVILLE, Tenn. (BVM) — Former Austin Peay State University Governors football player Jauntarius Bryant was excited for his opportunity to finally prove to the NFL he has what it takes to join the elite league. After a few phone discussions with Atlanta Falcons defensive coordinator Dean Pees, Bryant was at the facility to attend the Falcons’ rookie camp for his shot to make the team’s training camp roster. However, when he tried to enter the facility, Bryant was dealt a harsh dose of reality as it was not Pees who had reached out to him, but rather a hoax by a person with an Atlanta area code acting as the coordinator.

“It’s definitely one of the most embarrassing things that has ever happened to me and a very humbling experience,” Bryant wrote in a statement on his Twitter page. “Just want to apologize to everyone and the Atlanta Falcons organization for the mix up. I honestly thought it was a legit opportunity on my end. I do not know or understand why this has happened, but I do know that everything happens for a reason. Yes, this was heart breaking for me, but just another stepping stone I am not afraid to admit or overcome.”

“When the opportunity presents itself, I will be ready.”

It’s been a rough few days, but I felt the need to clear the air and get this off my chest. Honestly ready to move on from the situation. pic.twitter.com/yUJELOstZW

That opportunity has presented itself. After his story garnered national headlines from across the country in media like ESPN and USA Today, the Govs former star will get another shot at an NFL opportunity.

On May 17, HUB Football, an on-field developmental product designed specifically to help free agent professional football players to land professional opportunities, announced that Bryant would take part in the organization’s next free agent workout camp at Helix Charter High School in San Diego County on May 23. Players pay a small registration fee to participate and they have an option to purchase a copy of their film from the day, film which is distributed to every NFL and CFL team, but the risk has worked for many. According to the organization, HUB Football’s first two CAMPs of 2021 have led to seven free agents signing NFL contracts, four more receiving mini-camp invites and three others signing with CFL teams.

“We’re in the business of being a conduit for connecting NFL teams with free agent players whether they be of the undrafted variety or previous athletes with NFL or CFL experience where they try to get back on the rader,” HUB senior VP of operations Tom Goodhines said. “We don’t accept everybody because it is a limited, elite-level quality so we’re not wasting the NFL’s time bringing just anyone in.”

HUB Football heard of Bryant’s story the way many of the people heard it, through social media. They felt they would be the perfect avenue for Bryant to get a legitimate shot at impressing teams for an opportunity to make an NFL roster.

“Internally we read the story and kind of looked around and said, ‘Hey this guy is of that level,’” Goodhines said. “Collectively we internally talked and said, ‘Hey this is a nightmare, but this is exactly what we want to do to provide the opportunity to get athletes in front of teams.’”

For Bryant, he’s overcome many adversities and this is just one of many obstacles that he’s dealt with. An All-Metro player from Maplewood High School in Nashville, Bryant would bet on himself at the collegiate level as a walk-on at Austin Peay. The freshman would make the team and would eventually become one the team’s starting defensive backs as a redshirt sophomore.

In nearly three seasons as a full-time starter from 2017-2019, Bryant would rack up 242 total tackles, 8.5 tackles for loss, eight pass deflections, three forced fumble, a fumble recovery and an interception. During his redshirt senior season in 2019, Bryant would make 108 tackles, the most by a member of the Austin Peay secondary since the program returned to scholarship football and earn first team All Ohio Valley Conference honors. It was his second all conference award after earning second team All-OVC honors as a redshirt junior. Bryant also earned an athletic scholarship prior to the start of his redshirt junior season.

Thank you @GovsFB & everyone who played a part in our success. No matter how big the role, it was critical to this program. Coaches,Players,Boosters,Fans, Photographers & etc. I put my heart and body on the line for y’all, & I’ll do it again & again! We are FAMILY🖤 #FAST 2️⃣6️⃣out pic.twitter.com/BijabyAHAe

With his skill level and his story, Goodhines reached out to Bryant, who happily accepted the opportunity to show his skills at the camp.

“We told him we heard of his plight and we wanted to help right a wrong,” Goodhines said. “He was a very polite young man and from his messages and what we’ve seen his character rate is high. He clearly has his head on straight and that’s the kind of athlete we want to help. … He’s well-spoken, very polite, very appreciative and jumped at the opportunity immediately.”

As one of the 64 athletes participating in the camp, Bryant will have many eyes on him and will have to stand out. With roughly a 1-in-4 chance of earning an NFL opportunity according to Goodhines, HUB Football is hoping Bryant’s story is far from over.

“I think it can be a positive story, not just for Juantarius, but for us we’re excited about every athlete,” Goodhines said. “We’d be ecstatic if it was Juantarius or if it was any of the other 63 guys coming. Obviously with this story, it makes it a happy ending because one of the team’s coming is the Atlanta Falcons.”

Goodhines believes that regardless of what happens in Bryant’s future, his story should be one that players, coaches and fans can take lessons from.

“[The NFL] is a difficult world, if it was easy everyone would be doing it,” Goodhines said. “I think the one thing is don’t quit. You get hit, you get knocked down, you get back up. How you pick yourself back up and how you finish is more about you and your story and your character than anything else.”

Bryant will now have a legitimate shot to make his NFL dreams a reality. Though the situation may have come from the most embarrassing experience of his life, if he gets a chance to make a team this season, it will be Bryant who will have the last laugh.

Many doubted I would make it this far..