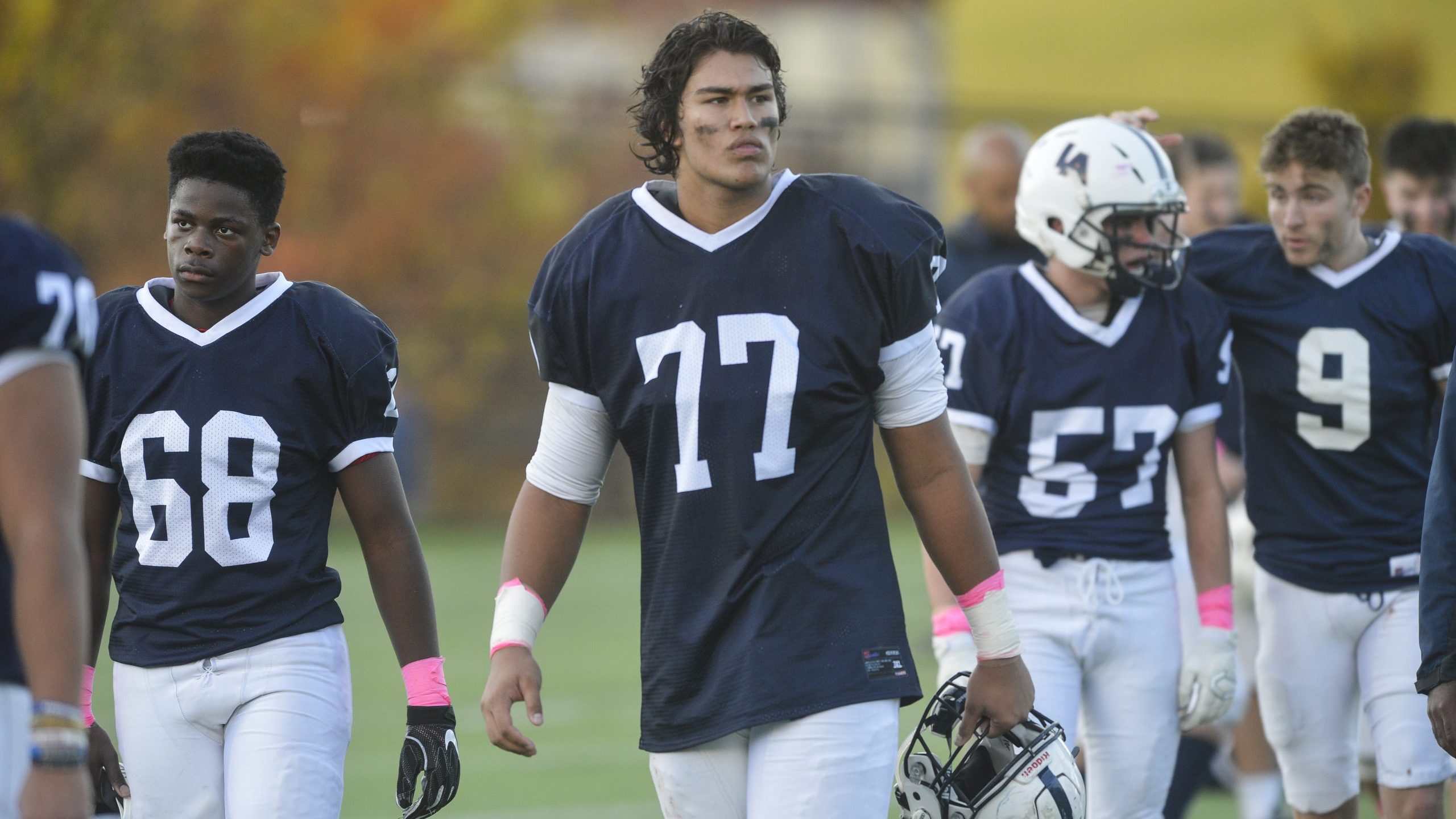 247Sports Class of 2022 No. 1 player in Massachusetts will play at Notre Dame after committing to the program back in December. (Photo: Lawrence Academy/Jon Chase)

GROTON, Mass. (BVM) — When Ty Chan first got to Lawrence Academy, the 6-foot-6 offensive lineman was looking for a change of scenery, hoping the transition would offer him a chance to play high-level football. After two years now with the program, it’s safe to say the move has paid off.

“The transition for me was a little hard in the beginning,” Chan said. “I had come here last year as a repeat sophomore and I missed my friends a lot in Lowell and seeing them play without me was a little bit tough. I’ve been very grateful for everything that has gone on, whether it was off the field or on the field here at Lawrence. I would say that the people here are very genuine.”

Coming over from Lowell, Chan grew not only on the field, but in the weight room. Playing his opening season on both sides of the ball, the offensive tackle turned heads with his size and ability in his first season with the team. After missing out on his junior season last year because of the pandemic, Chan has made sure to stay in the weight room, bulking up by gaining over 40 pounds throughout the offseason.

“Ever since football season had ended till about now, I would say I’ve been lifting non-stop,” Chan said. “Since the summer, when I decided to be just an offensive tackle, I just kind of focused on getting that size because beforehand, I didn’t really expect to blow up as much as I did.”

Adding lineman weight wasn’t something that Chan had done before because of his two-sport ability on the basketball court. The Lowell native is a ‘tremendous basketball player’ according to Spartans head coach Jason Swepson, and he has decided to put his focus towards his play on the field.

“I was definitely a basketball kid growing up,” Chan said. “I grew up in Lowell and more of the kids play basketball there. It was something I fell in love with very quickly.”

Chan’s dedication on and off the field led to his commitment to play football at Notre Dame. The decision had more to do than just football, though, as Chan looks forward to the academic opportunities he will receive.

“For me, football is a great thing that I’ve been blessed with and going through this whole recruiting process, I’ve looked at more of the afterlife of football,” Chan said. “I think Notre Dame, with Coach Quinn and Coach Kelly, they have a great staff and great potential for me to be one of those good players to come through there and I’m really grateful for that. But one of the large things in my decision was being able to go to a great academic school along with a great football school.

“I come from a place where not a lot of people are blessed with that opportunity to go to school for free and I definitely wanted to make sure I picked the school that set me up for life after football even if maybe I have the chance to go to the next level after college. I wanted to make sure I had a good degree and a good education for when I graduated college.”

Chan’s coach at Lawrence Academy has seen a mindset change since he first got to the program. As the two went to football camps together, he saw the realization from this star lineman that he could compete with the best.

“He still has a lot to learn, which is great,” Swepson said. “He has not been to a lot of so-called gurus out there so when Coach [Jeff] Quinn gets him, he’s going to be a piece of clay that has no bad habits. He’s eager to learn. Right now he’s just relying on ability and some little technique that I’ve shown him. He’s got a long way to go in technique and knowledge and he’ll learn it quickly.

“I think he’s put on 40 pounds of strength and prepared himself to compete as soon as he steps on campus at Notre Dame. That’s a tough task but that’s his goal.”

The Lawrence Academy head coach, who is a former player and coach at Boston College, will have to put his rooting interests aside when the two teams square off in the future.

“It’s Notre Dame and me being a Boston College guy, I had a lot of battles with Notre Dame over my career, I couldn’t be more happy,” Swepson said of Chan’s decision. “Notre Dame is a worldwide brand and I think he was just anxious to be associated with one the best academic schools in the country.”

With his senior season at Lawrence Academy still ahead of him, Chan is looking forward to closing his final year off on a high note. He is also excited to play in the Under Armour All-America game in 2022 after recently committing to the event.

“I would say that that was one of the best things that had come from this whole recruiting process,” Chan said of the upcoming experience. “I was very grateful for being able to commit and I was very excited to go back on the camp series. It was just a blessing to be considered one of those top guys and I think that experience, being out in Orlando and seeing all those high level people, will definitely be a life–changing experience. I’m very excited for it.”