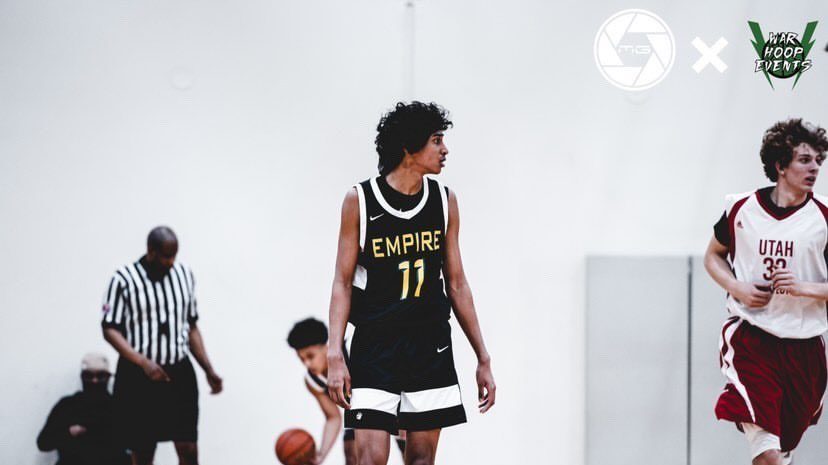 Born in Texas, Ryan Agarwal is breaking down stereotypical barriers about Indian Americans in basketball. (Courtesy: @themarcusgraves/Instagram; Used with permission)

COPPELL, Texas (BVM) — Those who take a look at Ryan Agarwal, an incoming senior at Coppell High School, may immediately notice that he’s an Indian American. A future Stanford University student, some may make judgments off his Asian American heritage. They may assume that he was accepted just because of his high test scores and that one day he’ll work in the STEM field. But in actuality, Agarwal will work towards his dream of being in the NBA while at Stanford as he’s committed to playing for the men’s basketball team starting in the fall of 2022.

The 6-foot-6 small forward is setting an example for South Asians all over the world on what it means to be someone who looks different in sports. He’s exemplifying that by excelling as a four-star prospect who is ranked as the No. 84 recruit in the nation and ranked at No. 20 at his position for the Class of 2022.

“There’s not a lot of Indians in the game, but I’m trying to change that,” Agarwal said. “I think I’m proving that Indians shouldn’t be deterred from doing these sports and I’m going to keep proving it. For me, I know I’m different, but I want to show that any person of any race can play college ball. To some people, being Indian in sports is seen as a disadvantage, but I’m using it to my advantage.”

Agarwal isn’t wrong in noting that there aren’t a lot of Indian basketball players — especially at the highest level. In 2015, Sim Bhullar became the first player of Indian descent to play in an NBA game when he had a short stint with the Sacramento Kings. Satnam Singh became the first Indian player to be selected in the NBA Draft when he was chosen as the No. 52 overall pick by the Dallas Mavericks in 2015.

Since there are only a handful of notable names, Agarwal would be grouped as one of the first Indian ballplayers in the NBA.

Agarwal’s motto is, “different: that’s the goal,” which is exactly what he’s been seen as since he joined AAU basketball in the third grade with the Texas Express before joining his current team, 3D Hoops Academy, in the seventh grade.

Since then, Agarwal said he’s been grateful to his family for being more supportive than most Indian parents.

“When I was a kid, my parents were actually pretty big on me trying all sports: football, baseball and soccer,” Agarwal said. “That was pretty dope, especially for having parents from India. A lot of Indian parents don’t really mess with sports like they do academics so having my parents do that was pretty cool. There was never a doubt in my mind that they wouldn’t let me play. There is no right or wrong way of going to college. They weren’t mad at all, especially after seeing that I still got into Stanford.”

Although it wasn’t hard to persuade his family, it was hard for him to convince some of his peers. Agarwal said it often crossed his mind that he wouldn’t succeed based on pre-judgments people made about his abilities.

“I’ve been told that college recruits wouldn’t look at me because, ‘when’s the last time you’ve seen an Indian succeed in the NCAA?’” Agarwal said. “When I was younger it was worse because people would yell stereotypical stuff at me during games. But at the end of the day, people will show you if they want you and I realized people judging me for my race is just something you can’t control. I just want to prove to them they were wrong.”

These days, Agarwal said that he has experienced nothing but love in his community.

“As of right now, it’s better for me because I’ve made a name for myself,” Agarwal said. “I have a lot of love around this community and I haven’t gotten a lot of recent hate but I’ve also been able to prove I can play.”

Agarwal is hoping the Stanford community will also be accepting of him. He gave his verbal commitment to the team after feeling included especially by the head coach.

“I never thought I would get into Stanford since it was always my dream school,” Agarwal said. “Stanford was one of the first schools to reach out to me and I got to talk to them for about a year before they even offered me. That whole time the head coach [Jerod] Haase was treating me like family even without offering me a scholarship yet. A bunch of us got to go to his house for dinner and he was the only coach to ever come to one of my practices.”

But there is still one more high school season to play before Agarwal joins the Cardinals.

“For the past 18 years our team hasn’t gotten past the second round of the playoffs which is our biggest curse,” Agarwal said. “My biggest goal is to win state and that would be insane for the whole team.”

This past season, Coppell High School made it to the second round in the playoffs, but lost by three points. The team still won 17 out of 21 games and Agarwal was a major contributor scoring 18 points per game.

Agarwal specializes as a shooter and said he is excited about playing for Stanford because “the team fits my style because they utilize shooters exactly how I want to play in college.”

In the meantime, Agarwal, at just 17 years old, wants to continue to encourage more people that look like him to join the game.

“Basketball is my favorite thing to do in the world and I want to make it my profession,” Agarwal said. “I never expected that I would play college ball after high school, being Indian, skinny and long, but who cares? Not everyone’s opinions matter and at the end of the day you have to do what you love.”