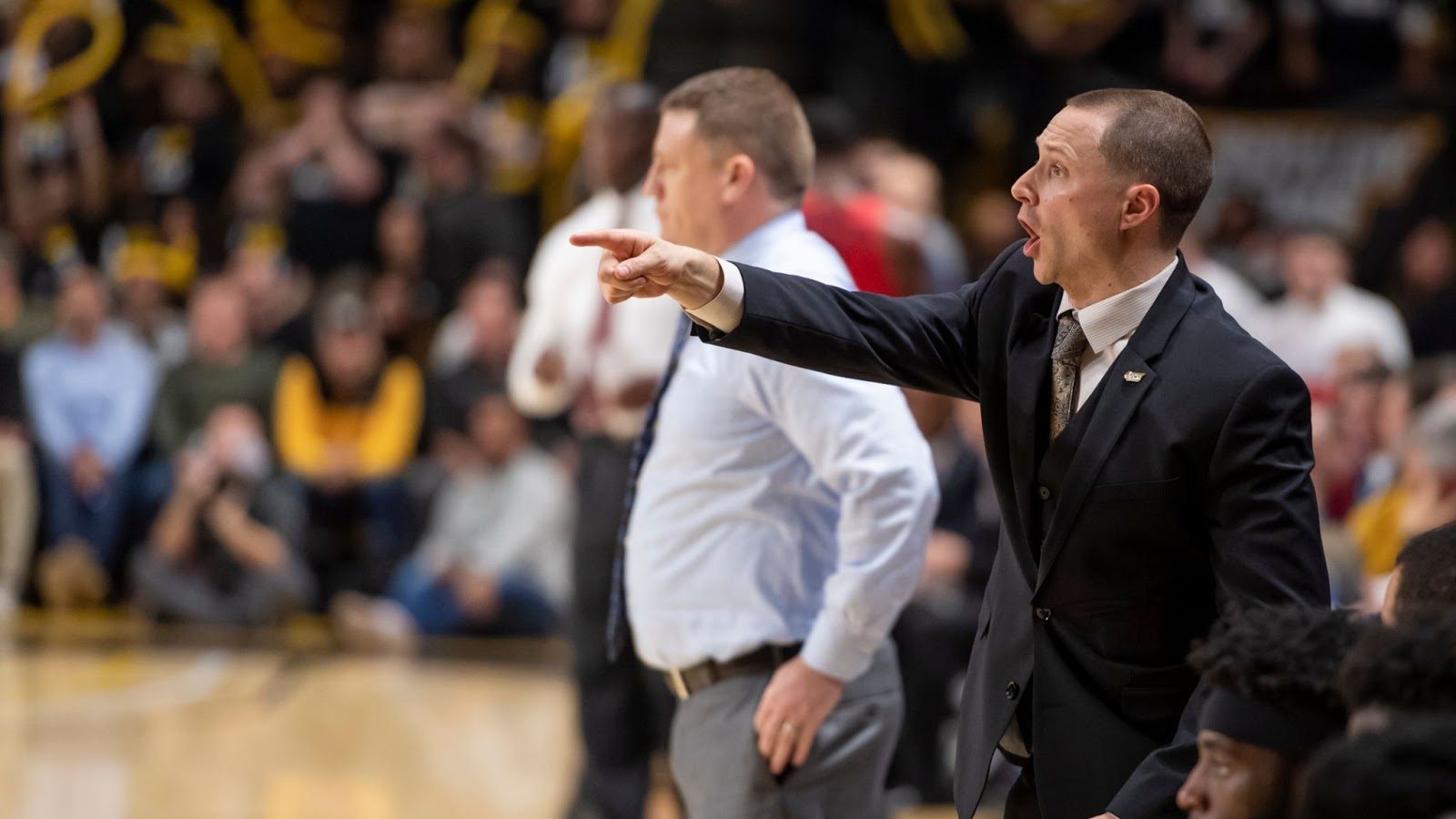 After a Hall of Fame basketball career at Lebanon Valley College, VCU men’s basketball assistant coach J.D. Byers, near, has excelled under Mike Rhoades, far, a fellow alumni of LVC who has taken the young coach under his wing. (Photo: VCU Athletics; Courtesy: Christopher Kowalczyk)

RICHMOND, Va. (BVM) — J.D. Byers knows the game of basketball, both as a player and now as an assistant coach at Virginia Commonwealth University. This knowledge would permeate through his playing career at Lebanon Valley College where he finished his career as a two-time Commonwealth Conference Player of the Year and a National Association of Basketball Coaches first team All-American after he led the Flying Dutchmen to the second round of the NCAA Tournament as a senior.

As a member of the Middle Atlantic Conference All-Century Men’s Basketball Team, it is no surprise that Byers earned entry into the MAC Hall of Fame as a member of the Class of 2021 the conference announced May 25.

“The experience at Lebanon Valley obviously really helped shape me and who I am today,” Byers said. “I think it’s cool to be recognized as one of the best to play in that respective conference, a conference that has had great players.”

Blessed and Humbled beyond measure! Want to thank the MAC, my family, teammates, coaches and friends. Nothing is possible without those in the fight with you! Basketball has taken me places unimaginable. Now trying to pay it back daily! https://t.co/rv7ZuolEIU

While at Lebanon Valley, Byers would set a program record with 301 3-pointers made and his 1,898 points scored ranks fifth all-time for the Flying Dutchmen. In 2005, Byers also won the prestigious Josten’s Trophy, awarded to college basketball’s top student-athlete, and was named the CoSIDA/ESPN The Magazine College Division Academic All-American of the Year. These accomplishments helped Byers learn a spot in LVC history as he was inducted into the school’s Hall of Fame in 2015.

“I never thought about the Hall of Fame,” Byers said. “There was obviously an incentive to be one of the best to ever play at Lebanon Valley, but my mindset has always been you’re only as good as your last performance, so every night out I wanted to try to play as well as I possibly could and help my team win.”

However, perhaps the most valuable thing Byers gained during his time at Lebanon Valley was a connection with his future mentor, VCU head men’s basketball coach Mike Rhoades. The head coach was also once a Flying Dutchman and was also inducted into the university’s Hall of Fame in 2005.

“We had Coach Rhoades’ jersey up in the [LVC] rafters,” Byers said.

Though Byers wouldn’t take advantage of this connection right away, becoming a graduate assistant coach at Fairleigh Dickinson-Madison from 2005-06 before returning to his alma mater as an assistant coach during the 2006-07 season, it has helped him to some of his most successful stops as an assistant as he was hired in 2007 by Rhoades to work on his staff at Division III Randolph Macon-College.

“Our staff is all connected in some form or fashion to Coach from history,” Byers said. “Literally, coach and I didn’t speak throughout my entire playing career at Lebanon Valley and my second year in coaching I was back at Lebanon Valley as an assistant and I ran into him on the road in September recruiting. We were sitting in the same gym at a workout and we talked and at the end of the year his coach moved on and he called [LVC Head] Coach McAlester and asked if he could talk to me.”

In 2014, Rhoades would again hire Byers onto his staff, this time at Rice University, and the two LVC alumni have been tied at the hip since.

“The most important thing about both of us is we’re very competitive so I think that helps us,” Byers said. “We see the game in a similar manner. We both want the team to succeed so we’re going to always try to outwork each other to get things done. As I’ve gotten older, we’ve been able to challenge one another and push one another and at the end of the day we have a common goal. The relationship has really grown as I’ve gotten older.”

When Rhoades was hired as the VCU head coach in 2017, he brought his closest assistant with him and together they have put together one of the top programs in the country. In four seasons, the two have helped the Rams to an 80-43 record with the Rams going to the NCAA tournament twice and winning Atlantic 10 regular season title in 2018-19 while appearing in the A-10 conference tournament championship game last season. The Rams finished the season with a 19-7 record and were eliminated from the NCAA Tournament due to a COVID-19 positive case.

Though still only an assistant coach, Byers is slowly gaining more recognition for his work on the sidelines. In 2020, the 15-year coach was named one of 50 Impactful Mid-Major Assistant Coaches by Silver Waves Media. He was also among a select group of assistants chosen to participate in the 2020 TopConnect Virtual Seminar which identifies the top basketball assistant coaches in the country and connects them with mid-major Athletic Directors to provide networking opportunities for both parties.

“It’s great, it’s like anything else in a team sport and you’re recognized when you’re successful,” Byers said. “I just try to keep getting better every day and just accept the recognition, put it in my hat and keep working each day.”

When it comes to wanting his own program, Byers is honest in saying that is the goal one day, but for now he is focused on the Rams and learning all he can from Rhoades. When the time does come however, the assistant coach will look to his mentor for help, as he does with every major decision in his life.

“[Our relationship] honestly means everything,” Byers said. “For me, if I’m making an important decision in my life, coach is always included and that’s personal decisions as well. If you have someone you feel that strongly about, it’s a special feeling and that’s why every day I want to lay it out on the line for him to make sure I can help his program be as successful as it can possibly be.”

Already a Hall of Famer for his play on the court, one day Byers could become good enough to enter a hall of fame based on his coaching credentials alone. With his basketball knowledge and ability to succeed at nearly every program he’s been at, it’s only a matter of time before Byers gets his own shot. When that day does come, perhaps it will be Byers extending his hand to help the next Lebanon Valley alum up the coaching ladder.

“I know I will hire people connected to me, there’s no doubt about it,” Byers said. “I would love to have somebody from the Valley with me and continue to help them chase their dreams and aspirations moving forward.”