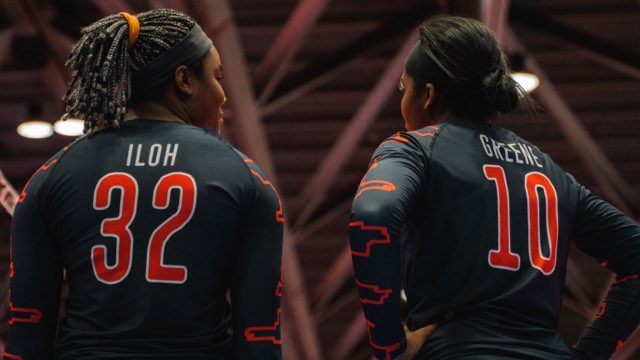 Iloh mentioned how the US is planning a women's professional volleyball league and that this may be something she'd be interested in. (Courtesy: A5 Mizuno Volleyball)

PEACHTREE CITY, Ga. (BVM) — When the Iloh family moved to the U.S. from Nigeria, it started off with mom and dad. They met in their homeland but immigrated at separate times, reuniting in America. They built a strong legacy over the years, both graduating from college and raising successful children.

One of their children, Ngozi, is well on her way to carrying out that proud Iloh legacy. Iloh, the only volleyball player in a family full of basketball players, has been named the Gatorade Georgia Volleyball Player of the Year. Her name, Ngozi, stands for “God’s Blessing” and that’s exactly what she’s been to her family and to the McIntosh High School volleyball team.

As the team’s brightest star, Iloh led the Chiefs to an overall record of 33-1 this past season as well as a 5A state championship. The 6-foot-1 middle blocker contributed on all parts of the floor, amassing 525 kills, 123 digs, 52 blocks and 41 aces. Volleyball Mag and MaxPreps named her a first-team All-American while Under Armour listed her to its second team.

Iloh may be so ahead of the curve thanks in part to her club team which had the opportunity of going overseas to play against the Botswana National Team. Playing against this level of competition in a new country opened her eyes to a whole new style of volleyball.

“I learned a lot of how their playing style differs from ours, how the national team was training and how they were taught,” Iloh said. “It was an eye-opening experience. I really enjoyed it.”

They were also able to enlighten the Botswana people on the USA’s style of volleyball. In collaboration with some of the nation’s villages, Iloh’s club team hosted camps for the children, teaching them the basics of the game. Passing, hitting and setting were the emphases of their teaching experience, letting the kids get live reps with one another.

Volleyball has taken Iloh quite literally around the world, but that journey is far from over.

This fall, Iloh will join the Duke Blue Devils as a member of their volleyball team. Many may not know, but the volleyball star is a brainiac just like her college-graduated parents, and the combination of a strong athletic presence plus elite academics was what lured her to Durham.

“It’d be hard to find a balance between volleyball and school but at Duke, I found both,” Iloh said. “I’ll be set for life after volleyball but I can also enjoy my time now and play and win and prosper with the team there.”

Wanting to be an anesthesiologist, Iloh believes Duke has all the tools necessary to help her achieve that goal. Likewise, the volleyball team believes Iloh has what they need. The Blue Devils’ last NCAA tournament win was in 2013, so adding the McIntosh standout could be a boost that gets them back to winning ways.

While many athletes say they’ll offer a specific skill or expertise to put their new team over the top, Iloh went against the grain. She thinks that there’ll be a new energy at Duke.

“A little bit more youth, excitement; a new way,” Iloh said. “Between those that are already there, we are going to be a breath of fresh air for them and the team.”