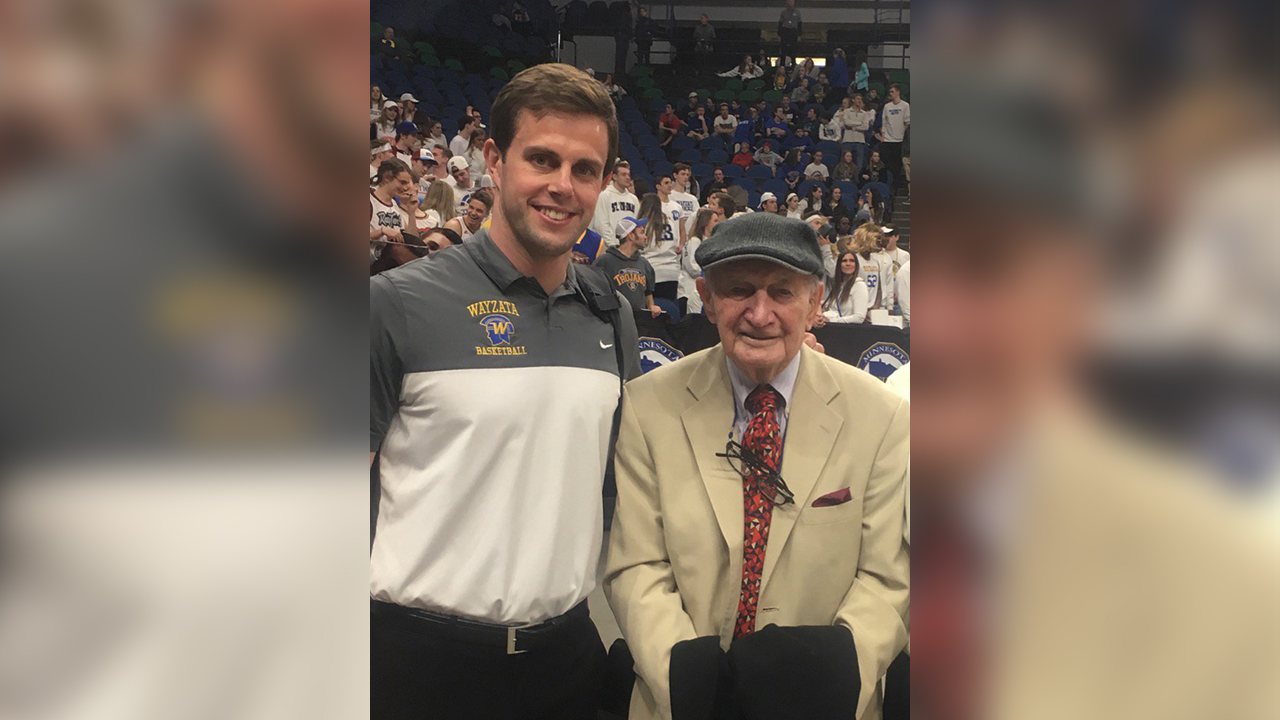 Bryan Schnettler poses with Jack Thurnblad, the Wayzata head coach when the Trojans last won state in 1959, during the 2017 state tournament. (Courtesy: Twitter/@WayzataTrojans)

PLYMOUTH, Minn. (BVM) — Growing up in Rice, Minn., a small town near St. Cloud with a current population of just over 1,000 people, playing competitive team sports can be a whole different landscape then, say, growing up in the Twin Cities. Finding programs and teams to play with is much harder, something that Bryan Schnettler and his family experienced beginning at a young age.

Instead of going to the local gym or recreation center like many in Wayzata or other larger suburban cities would do, Schnettler and his brother were constrained to the driveway and yard of their secluded house. Whether it was shooting hoops, playing catch or wrestling with a football, sports were always being played at the Schnettler household.

But at the age of just seven years old, tragedy struck Schnettler and his family with the death of Schnettler’s father. His ‘father figure’ that countless young athletes depend upon for sports was suddenly gone.

In need of distractions and escapes from the difficult times, Schnettler turned to a passion he found at his young age: basketball.

“It was kind of my escape,” Schnettler said. “When I was having a hard day, maybe it was because I didn’t have my dad or whatever reason, I would go shoot and that is just what I did every single day.”

From then on, Schnettler’s life has been nothing but basketball. He played varsity for three years at Sartell High School before playing college basketball at UW-Superior and then transferring to St. Thomas for his final three years.

Despite a short two–month stint as a professional player for the Rochester Fire in the American Basketball Association, Schnettler said he realized at a relatively young age that every kid’s dream of making it to the NBA was not a realistic one for him, and that coaching would be the best path.

Schnettler started out his high school coaching career at Edina High School but then left for Rosemount just one year later in 2009. After finding success as the varsity head coach, he left Rosemount for Wayzata in 2014 where he has been the head varsity coach ever since.

During his time at Rosemount, Schnettler moved around the school as a teacher as well as helping out with security. He also spent time as a teacher for a charter school in St. Paul. Not having that continuity as a teacher in the high school that many high school coaches have was part of the reason he left for Wayzata, who also had an opening as a full-time physical education teacher allowing Schnettler to be in the building all day long.

“When I was in Rosemount, it was hard not being there everyday,” Schnettler said. “Teaching at different schools or having different jobs at different places, you show up for practice and then you leave and you just don’t have the same connection or relationship that I have been able to form here at Wayzata.”

With multiple years of coaching experience now under his belt, Schnettler and the Trojans have become no cakewalk in the Lake Conference, let alone the state. Since taking over in 2014, Schnettler’s Trojans have made three state tournament appearances along with two section championships. And now this year, Wayzata won its first boys basketball state championship since 1959.

Perhaps his biggest accomplishment, though, and one of the reasons he became a coach in the first place, is being a ‘father figure’ to those he coaches, something that was taken away from him as a kid.

“Part of the reason I coach and teach now is I get to have an influence on young people, especially young men as the boys basketball coach, that maybe I didn’t necessarily have because I didn’t have a dad,” Schnettler said. “I had great influences in my mom and family, but I was always kind of jealous of those who had their dad there to help push them and help raise them.”

Many families that have gone through the Wayzata program in the last seven years probably can attest to the ‘father figure’ that has been served by Schnettler, but one in particular that has made a huge mark on program even before Schnettler took over as head coach is the Beeninga family.

Senior guard Eddie Beeninga is the fourth member of the Beeninga family to go through the Wayzata program while brothers Johnny Beeninga and Jacob Beeninga graduated in 2016 and 2019, respectively. The eldest, Will, graduated in the spring of 2014 while playing under Schnettler’s predecessor, Phil Ward. There are two more Beeninga boys in the system, too, Nick, who was on the 10th grade team in 2020-21, and Max, who will be a seventh grader next year.

When Schnettler was initially hired in 2014, he had an immediate initiative of getting to know some of the families in the district, especially the Beeningas. That spring, Schnettler went over to the Beeninga house for dinner to get to know the parents, Dean and Julie, as well as all the boys he was going to coach.

“Ever since that, our families have definitely had a close bond because my parents have had to trust him with their kids,” Jacob Wayzata’s all-time leading scorer, said. “I think our families definitely have a good relationship.”

Even now with Jacob playing college hoops at Minnesota State Moorhead, Schnettler still has not stopped keeping that bond. Occasional text messages are exchanged as well as some 1-on-1 or 2-on-2 pickup games this spring.

“I’d say that he definitely embodies that father figure to all of us, all of the guys he coached,” Jacob said. “He took it beyond the court in making an impact on our lives. He would always preach it is not enough to just show up everyday. You got to show up with a passion, show up willing to work hard and willing to sacrifice for your teammates. The thing about him is he really showed that personally. You can tell how much he cared about us.”

Schnettler has two young boys of his own now, who at just three and five years old seem to already have that competitive nature and love for basketball passed down first from Schnettler’s late father.

“My boys now are old enough and they absolutely love coming to games,” Schnettler said. “You’d be shocked how much those two know about our team and how much they, and especially my five-year-old, look up to those kids and talk about Eddie Beeninga in the basement, and Drew Berkland, and Camden Heide, and Carter Bjerke. He knows more about some of those guys than 90% of people do.”

Schnettler said that he and his family are very happy with where they are now, especially with his kids now growing up in the district. He plans on staying at Wayzata for the long run, continuing to make positive impacts on young basketball players both on and off the court.