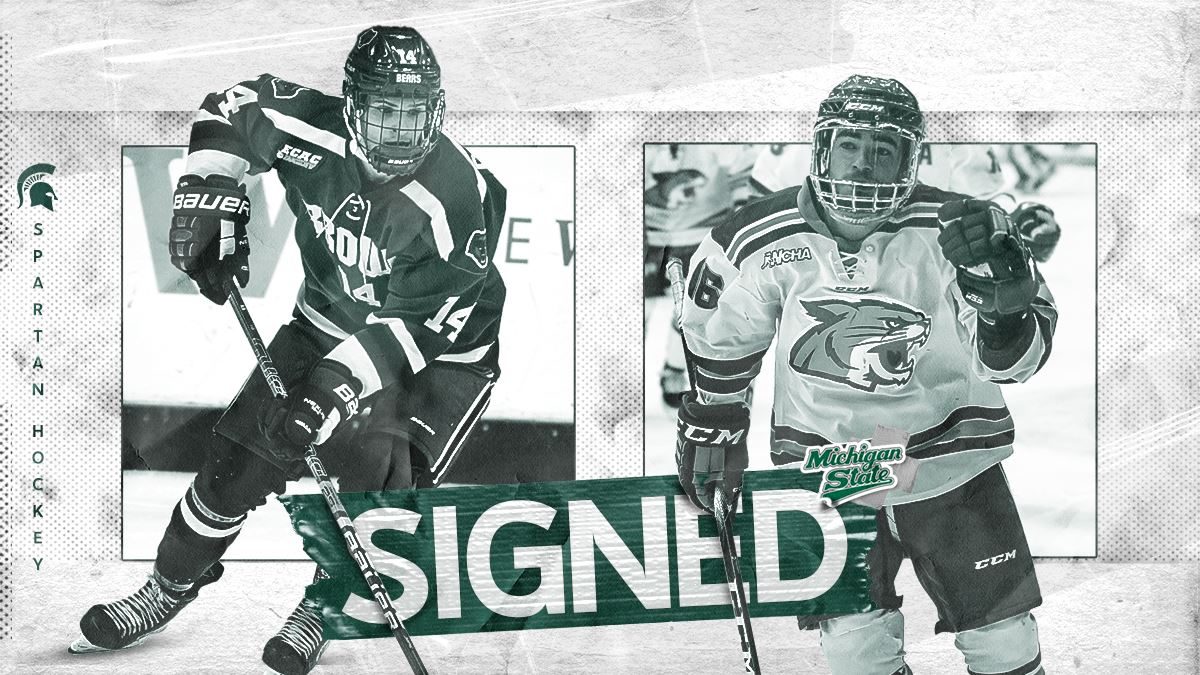 EAST LANSING, Mich. (BVM) — After a last–place finish in the Big Ten, there is no question that the Michigan State hockey team has many improvements that need to be made.

It all starts with the offense. How are they going to find a way to score more than 1.48 goals per game (the second–worst mark in the country)? The addition of graduate transfer Charlie Combs from Bemidji State last year was supposed to help, but his production, like the majority of the team, tapered off in the second half of the season.

The Spartans look like they took some steps in that direction of improvement by adding two transfers to the team, finalizing the number of newcomers at seven for the 2021-22 season.

The two newly–signed Spartans are both forwards: Chris Berger and Griffin Loughran, who come to East Lansing with two years of eligibility each. They join forwards Erik Middendorf, Tanner Kelly, Jesse Tucker and Jeremy Davidson and defenseman David Gucciardi as new faces for the upcoming season.

If either Berger or Loughran look like an early favorite to be a Charlie Combs 2.0, it would probably be Loughran. Standing at just 5-foot-7 compared to Combs’ 5-foot-6, Loughran fits that same profile of a small, scrappy, goal-scorer.

Coming down from the upper peninsula, Loughran joins MSU after three productive seasons at Northern Michigan. In 88 games, he tallied 35 goals and 37 assists for 72 points including a phenomenal sophomore season with 23 goals, tied for second most in the country, and 16 assists in 37 games. Loughran plays with speed and can provide valuable minutes on both the power play, which was one of the worst in the country last year, and the penalty kill.

Berger joins MSU after playing two-and-a-half seasons at Brown University where in 65 games, he recorded 11 goals and 17 assists. He has not played in a game since November 2019 due to injury and a canceled 2020-21 season, but he is described as an “excellent skater who plays a 200-foot game … A heads-up playmaker who uses strong stick skills and vision to create offense … Relentless worker without the puck.”

To go along with the issues of last year’s team, the graduating seniors left behind some holes that will need to be filled.

First, the Spartans will need a continued emphasis on winning faceoffs, one of the few strengths of last year’s team. That effort was led by Tommy Apap, who was consistently among one of the best faceoff-winners in the country in his four seasons at Michigan State. Now graduated and playing for the Indy Fuel in the ECHL, MSU will need one of these six young forwards to be an enforcer in the faceoff dot, especially being that winning faceoffs is one of the first steps in goal scoring.

The green and white will also need to find someone to be a premier shot blocker. Tommy Miller, who transferred to Northeastern this year, was third in the country in total blocked shots at 71. Apap was also a great shot-blocking forward with the sixth most blocks in the nation (30) in 2020-21.

These are just a few areas that need to be addressed. Asking for Michigan State to go from worst to first in the Big Ten like Wisconsin did last season (having a guy like Cole Caufield certainly helped) is asking for a lot, but finishing outside the bottom two in the Big Ten is a place to start.

Michigan State has not done it since the 2015-16 season when it finished second in the Big Ten, but hopefully this group of new guys can make that goal achievable.