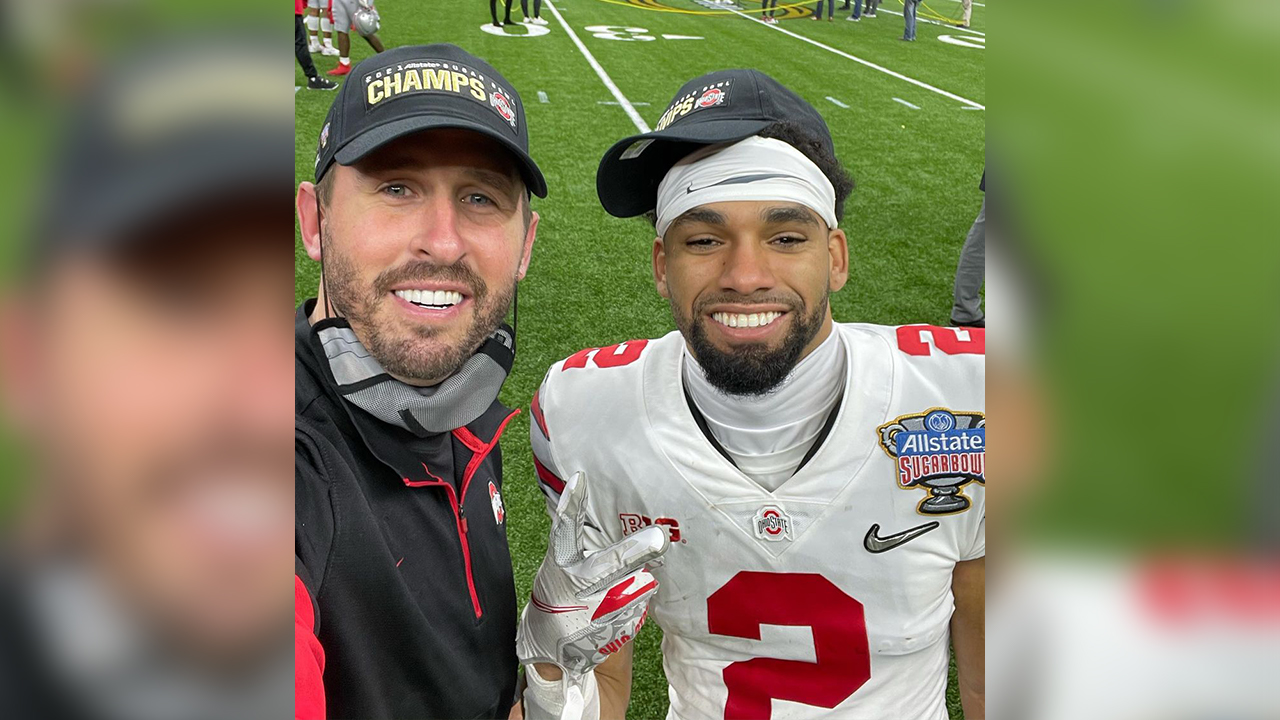 COLUMBUS, Ohio (BVM) — Blue Blood college football programs have the luxury of securing top recruits. The legacy, the aura and the luxury of programs like Alabama and LSU are tools that those schools use to entice high schoolers and transfer students to come to play for them. But, some schools have a true X-factor in their recruiting process; Ohio State might have one.

Ohio State wide receivers coach, Brian Hartline, has quickly developed, arguably, the best wide receiver room in college football in a few short years. But, not all of the credit should go to the 34-year-old as he is not catching the passes. From the starters to the recruits that have yet to receive their high school diploma, Ohio State’s wide receivers are in a league of their own.

From the top of Zone 6’s — the self-proclaimed name of the WR room — depth chart resides incumbent starters: Chris Olave and Garrett Wilson.

Starting with the senior, Olave has outperformed his recruit billing. Coming out of Mission Hills High School in 2018, the three-star receiver was ranked the 47th best Californian, 68th best WR and 399th overall by the 247Sports Composite ranking. Since arriving on Ohio State’s campus, Olave has been highly productive. Up to this point, No. 2 has caught 111 passes for 1,775 yards and 22 touchdowns in 35 games.

Many thought that ‘CO2’ — as he is colloquially known by — would declare for the 2021 NFL Draft, but he decided to give it one more go in the scarlet and grey uniform. ESPN’s Mel Kiper Jr. had Olave as his No. 7 ranked receiver for the 2021 draft class but now has him listed as the No. 25 overall player in his 2022 draft rankings.

The second name of the dynamic duo is Wilson. The highly touted recruit from Austin, Texas is actually from the suburbs of Columbus, Ohio, but moved later in life because of his father’s job. The Lake Travis High School product was labeled as the second-best wideout, third-best Texan and the 20th player nationally by 247Sports in 2019. Since coming back to Ohio, Wilson has provided highlight-reel catches and honorable stats.

In his career, No. 5 has recorded 1,155 yards and 11 touchdowns on 73 receptions in 22 games. The wideout is known for his elite body control and insane athleticism to which, in the same article written by Kiper Jr., ranked him as the No. 11 overall player for the 2022 draft.

With Wilson moving to the ‘X’ wide receiver position and Olave remaining at ‘Z,’ there is a position for grabs in the slot. This is where the underclassmen will battle for a starting spot. If one were to place a bet on who will earn the starting slot receiver position, then Jaxon Smith-Njigba might be the person to place it on.

Sophomore Smith-Njigba (JSN) saw limited playing time in a 2020 season that was limited altogether. However, in his limited role, he flashed and showed what his potential could be. Now that Jameson Williams has transferred to Alabama, Smith-Njigba looks to be the favorite to start in the slot.

This Jaxon Smith-Njigba catch was UNBELIEVABLE 😱

JSN, like Wilson, was a highly coveted recruit from Texas when coming out of Rockwall High School in the 2020 class. No. 11 had committed early when he announced his commitment to the Buckeyes back in 2018. Regardless, JSN was ranked as the fifth-best wideout and Texan while being a top-30 player nationally, according to 247Sports Composite.

The Texan would make his name known early at the Woody Hayes Athletic Center as he would be the first 2020 recruit to lose his black stripe. There is a tradition at Ohio State started by former head coach Urban Meyer in that newcomers to the team have a black stripe placed over the scarlet portion of their helmets. When a player signifies that they have worked themselves to be a part of the team, a coach or player will remove the black stripe in celebration.

Joining Smith-Njigba in the 2020 class, Julian Fleming might be the most illustrious of all the wideouts in terms of recruiting aura. Fleming was ranked as the top WR, the top player from Pennsylvania, and the third-ranked player in the nation. Often are top recruits given comparisons to help paint the picture of how talented they are and what they could potentially become.

For Fleming, one recruiting site had his comp as Julio Jones.

If anything is true about the Jones comparison, then Fleming should be a backup to Wilson in the wide receiver X position as his size, build and athleticism would be tailored for a role on the outside. Fleming, like Smith Njigba, also saw the field in a limited role catching seven balls for 74 yards.

No. 4 and JSN will round out the 2020 class wide receivers as Mookie Cooper would transfer to Mizzou and Gee Scott Jr. would find it hard to keep his weight down, so he decided to switch positions to tight end.

Headlining the newest group on campus is Emeka Egbuka from Steilacoom, Wash. Egbuka is similar to Fleming in that he was the No. 1 wide receiver of his class. Following that, Egbuka was the second-ranked prospect from Washington and ninth overall in the nation. No. 12 also has a pro comparison to that of JuJu Smith-Schuster.

It is obvious that Egbuka came to campus with a lot of hype and so far he’s done well in his new uniform. The Washingtonian was the second of freshman wideouts to have his black stripe removed. Then, the pass catcher put on a clinic during Ohio State’s spring game with seven catches for 123 yards.

Emeka Egbuka was the top receiver coming out of high school and he certainly looked the part in the spring game. pic.twitter.com/moy0u75Q1n

However, it is often forgotten that collegiate athletes are in fact students and Egbuka has done well in the classroom.

The 6-foot-3 receiver from St Joseph’s Prep in Philadelphia fell in love with Ohio State early and committed back in late 2019. Harrison Jr. was a top-100 player in the nation, the 14th-best receiver and the fifth-best player from Pennsylvania. according to the 247Sports Composite. Luckily for the football standout, he would travel to Columbus with his high school quarterback, Kyle McCord, as he would commit with him and wind up being one of his roommates as well.

When No. 18 arrived on campus though, he quickly entrenched himself in the Buckeye culture. To that end, Harrison Jr. — along with 2021 classmate Jack Sawyer — would be the first Buckeye freshman to lose his black stripe. Then in the spring game, Harrison Jr. would match Egbuka’s reception number but would also have 49 yards and score.

This dude was running routes by himself or with a QB everyday in Woody Hayes Athletic Center while we practiced indoors leading up the season.

Last but not least of 2021 greenhorns is Jayden Ballard from the stadium that Paul Brown built: Massillon Washington High in Massillon, Ohio. Ballard has been the most reserved of the three new wideout enrollees, but he has been quietly working in the shadows.

The four-star Massilon Tiger was touted as the fourth-best player from Ohio, one spot below future teammate Harrison Jr. in WR rankings at No. 15 and a top-100 player nationally. Ohio State was the first university that offered the 6-foot-2 wideout to which he would quietly commit to in the summer of 2019.

Afterwards, the trio of pass catchers would eventually fill out and make their way to Columbus. Up to this point, Ballard has yet to have his black stripe removed; not concerningly though, as No. 10 is still a little raw in comparison to his roommates, Egbuka and Harrison Jr. In the spring game, Ballard recorded two receptions for 11 yards.

Just out here having fun in the sun 😎#GoBuckeyes #Fight pic.twitter.com/uKSdo2Fl8P

The ‘Buck’ doesn’t stop there as Kyion Grayes, Kaleb Brown and Caleb Burton have all pledged a commitment to the scarlet and grey as top recruits in the 2022 class. It should be known that it takes two to tango, and luckily for the fans of ‘Buckeye Nation,’ Hartline & Company are dancing all over the gridiron.

Spent entirely too much time looking this up. Here are the top-60 receiver prospects coming out of high school the last four years (2019-2022), regardless of class, according to the 247Sports composite ratings.

Ohio State has signed/got a commitment from 11 of them pic.twitter.com/ScELNTpXNV