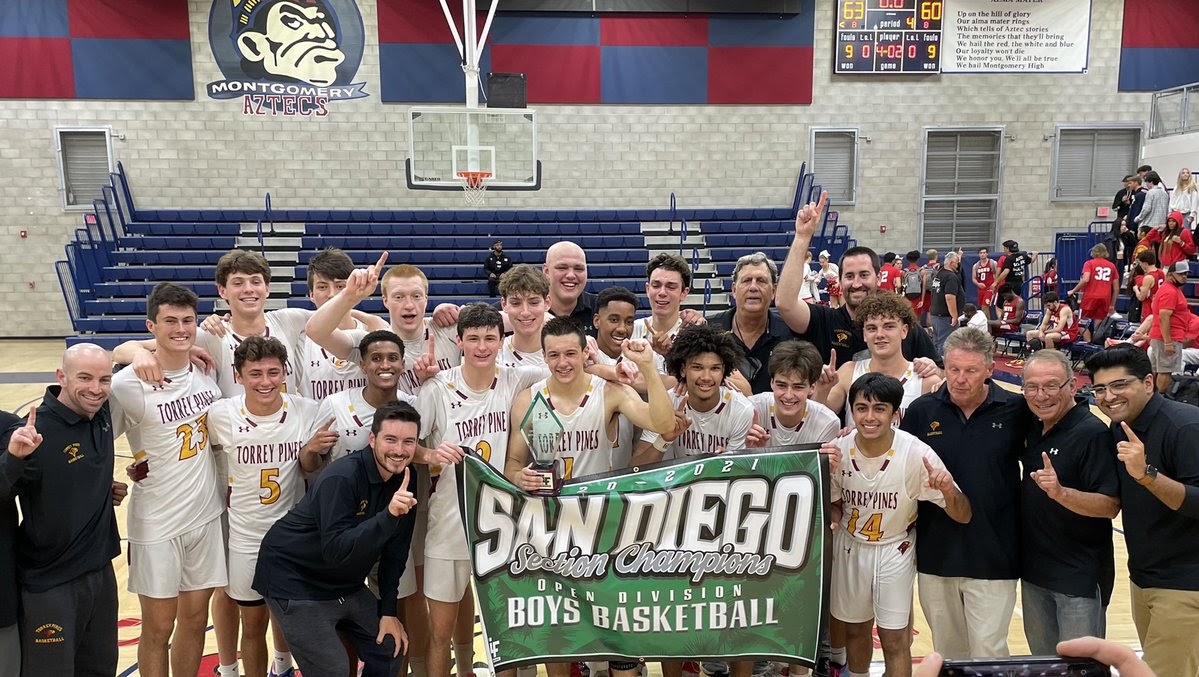 SAN DIEGO (BVM) —  Though the COVID-19 pandemic has been atrocious, the countless time spent indoors with family members has helped grow and deepen relationships. As counties slowly lifted restrictions and CDC guidelines were changed, people began to see others they knew had stayed healthy throughout the quarantine. Again, more relationships grew. It was as if those who people saw the most became their family. Torrey Pines High School head boys basketball coach John Olive noticed these relationships forming around him. He thought that by being extremely careful and remaining healthy, he could create a second family of his own with the players and coaches of his basketball team. So, he tried.

Coach Olive’s basketball career started in the late 1960s when he began playing for Bishop Eustace Preparatory School, a high school in Pennsauken, N.J. While playing in the area, his skill caught the eye of Villanova University’s head coach Rollie Massimino. At the time, Massimino was trying hard to rebuild the basketball program at Villanova and decided Olive would be a helpful addition to his first recruiting class. After struggling for a couple of seasons, the program became much better. Olive continued to play at the small forward position for the university until he was drafted to the NBA in 1977. He played a season with the San Diego Clippers before he began coaching. In 1985, Massimino offered Olive an assistant coaching job. He accepted the offer and helped coach the Villanova Wildcats until 1992, when he moved to southern California to coach the Loyola Marymount Lions.

During Olive’s time playing and coaching at Villanova, a common theme that Massimino emphasized was “family.”

“Coach Mass was a father figure to me,” Olive said. “I would have gone through a wall for him. He loved you like a son.”

Massimino believed that enthusiasm is contagious. As long as there is a brotherhood and a familial bond among players and coaches, there would be no problem getting the job done in practice and winning games, a principle that has continued in Wildcats’ basketball to this day under coach Jay Wright. Olive has since adopted this approach as well while coaching the Torrey Pines Falcons in San Diego, especially during the pandemic.

When people started to become more comfortable with others outside of their family, Olive decided to put together practices on COVID-friendly outdoor courts for anyone willing to attend. Although there was uncertainty about a season, the team looked for any outlet to play and get better. After spending what seemed like hundreds of hours playing outdoors while relationships and a brotherhood formed, the team got an unexpected call from the California Interscholastic Federation, the governing body for high school sports in the state. They were informed that a shortened, yet still significant, season would begin on March 10, 2021. They were ready.

Once they began playing in March, they went undefeated in their first ten games. From that point forward, Olive knew he was coaching a special group of boys.

“I wanted to turn a stone for these guys to win,” Olive said.

The team kept practicing on the court and watching tape, focusing on the big picture offense and defense and how they could break each down to make certain plays happen. Doing so led them to a perfect season with a record of 29-0. The Falcons averaged 72.4 points per game throughout the season, 33.7 rebounds per game and 17.8 assists per game. In addition to other statistics, the numbers recorded are well above the national average, ranking them the best team in the state.

The Falcons continue to amaze their fans as they head into the Open Division playoffs, seeking a state title. On Saturday, June 12, they won the Open Division CIF city championship 63-60 over Cathedral Catholic High School off an inbound buzzer-beater shot by Nick Herrmann, the Falcons’ senior guard. It was a special moment for Herrmann. He has worked hard to get to this point after being away from the game for so long due to treatment for bone cancer in his left leg.

“To see a kid who has had six inches taken out of his bone, with a 42-inch scar down his leg, and thinking he may never play basketball again do that… it is tear-jerking,” Olive said.

Olive and the family he has helped form over the unprecedented year are looking forward to the coming weeks as they begin their search for a state title. With its strong bond, the team should feel that it can do anything as long as they stay together.