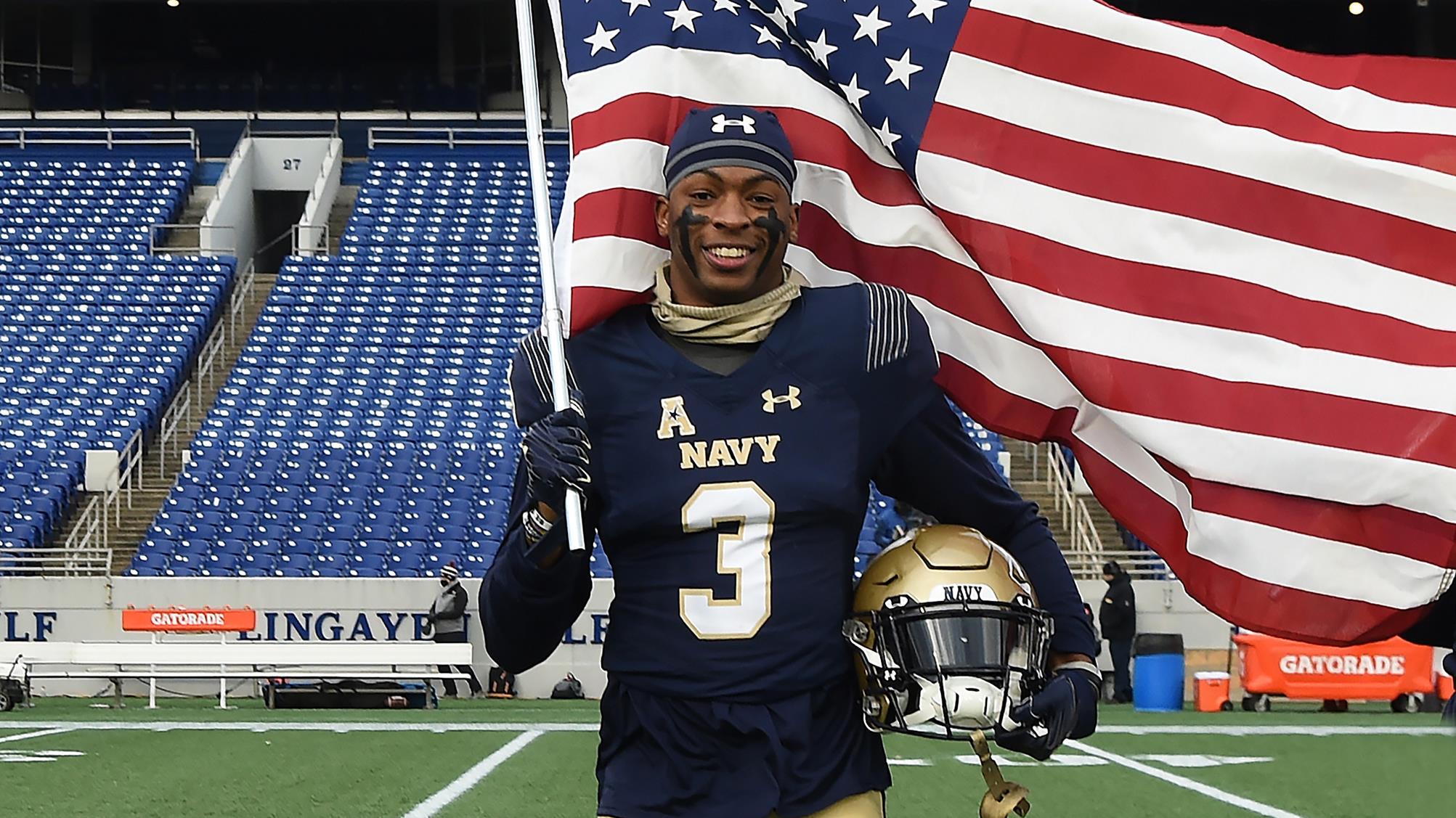 Kinley should hold on to some hope as NFL legend Roger Staubach and NBA legend David Robinson served in the military in some capacity before beginning their professional careers. (Photo: Navy Athletics / navysports.com)

TAMPA, Fla. (BVM) —  Every athlete across the nation pours their blood, sweat and tears into the game they love. The difference is that for most, they move on with life following high school, as only 7% of those play at the collegiate level. Of those college athletes, less than 2% go pro.

For Naval Academy cornerback Cameron Kinley, things were shaping up in his favor: that 2% was going to be him. He was one of those select few who would be able to play at the highest level as he was signed by the Tampa Bay Buccaneers and a lifelong goal was going to be fulfilled: playing in the NFL. That was until the Naval Academy denied his waiver to delay his commission.

“I started thinking about all of the hard work I’ve put in over the years and the adversity I had to overcome to get to the point of having the opportunity to fulfill this childhood dream of playing in the NFL,” Kinley said. “So for some words said in a matter of seconds to have the power to take everything away from me like that definitely hurts. I couldn’t understand it and I still don’t understand it.”

The reason it has become so controversial is the fact that athletes from other military academies have been afforded the right to pursue NFL careers this year. Jon Rhattigan of Army and three Air Force athletes, Parker Ferguson, Nolan Laufenberg and George Silvanic, were all granted delayed commissions. Yet, without any explanation, Kinley was not.

Furthermore, for an athlete who was also an exceptional person in every other aspect of life, the decision turned some heads. As the Class President at Navy, Kinley performed the graduation ceremony’s commencement speech and welcomed Vice President Kamala Harris to the stage to speak to the graduating class.

In the Bucs’ rookie camp, which Kinley was partaking in, he even had an interception at the expense of highly-touted quarterback Kyle Trask. Between his honorable academic achievements and his on-field product, an explanation as to why his waiver was denied would have been the very least that Navy secretary Thomas W. Harker could have offered.

“It’s tough because I tried to do everything by the book at the academy,” Kinley said. “It’s troubling when you play all your cards right and things don’t end up the way you thought they would but I’m sure something greater is going to come from the whole situation.”

Kinley has kept a sliver of faith alive during all of this, because in two years, he is allowed to apply for an early release from his five-year commission. The odds of him sticking in the NFL that far removed from the game are not in his favor, but it gives him some relief amidst all this havoc. However, it might just be the idea of playing in the NFL one day that soothes him. Going through this whole process again isn’t even something he’s sure he wants to do.

“That’s a conversation I’m going to have to have with myself later down the road, and I’ll cross that bridge when I get there because, to be honest, this situation has been draining for me,” Kinley said. “It has taken a lot out of me, been tough on me mentally so I don’t know if I want to have to put myself through that same experience of, ‘maybe they’ll let me go, maybe they won’t.’”

But to Kinley, the most aggravating part of this all is the fact that people think he is trying to avoid the service he committed to when coming to the Naval Academy. However, that couldn’t be further from the truth. In fact, a Navy athlete is allowed to transfer any time before his or her junior year without obligation. Kinley chose to stay true to the commitment he initially made.

“I never considered leaving the Naval Academy and that’s what is so frustrating,” Kinley said. “You have people trying to say I am trying to get out of my commitment, and it’s like if I was doing that I would have transferred before my junior year before I signed that contract. It was never about trying to get away from service, it was more so the ability to do both.”

Since the decision was made, Kinley has had many notable people speak up on his behalf. Most recently, Florida Senator Marco Rubio penned a letter to President Joe Biden asking for him to reverse the Navy’s ruling and allow Kinley the opportunity to chase his NFL dream.

But whether the choice stands or is reversed, Kinley had a taste of NFL action, something he can hang his hat on forever. Now focused on serving as an officer in the Navy, Kinley is making sure to take the right approach to the fiasco that might’ve ended his football career.

“Every single day walking into the facility and having the opportunity to compete with the best of the best, you know, to put on an NFL helmet and be in an NFL facility, it’ll definitely be a memory I cherish,” Kinley said. “If it was my last football experience I can look back and smile at that and have no regrets. I did everything that I could at the end of the day to put myself in that position and I’m at peace knowing that.”

***UPDATE: On July 6, the Navy reversed their decision and has now agreed to allow Kinley to delay his commission. He is set to rejoin the Tampa Bay Buccaneers at training camp.