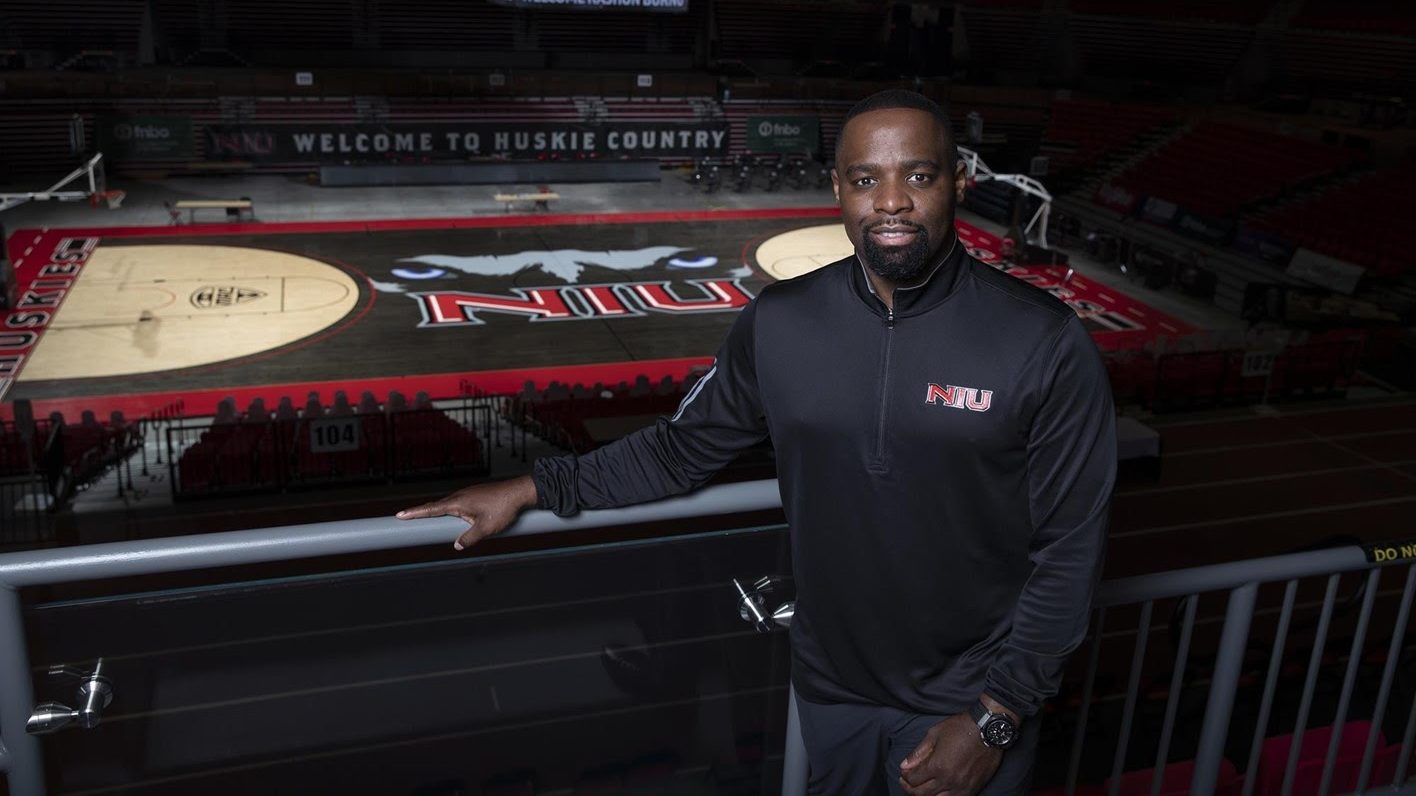 Rashon Burno poses for a portrait at the Northern Illinois Convocation Center in DeKalb, Illinois. Burno will look to turn around a Huskies squad that finished 3-16 (2-12 Mid-American Conference) in 2020-21. (Northern Illinois Athletics, Photo Courtesy)

From 2007-10, he served as head coach at Marmion Academy in Aurora, Illinois, beginning his coaching career.

“You have this opportunity you work your whole life for — to be a head coach at a Division I level,” Burno said. “Not many people can say that, so I’m extremely excited. I think the future’s bright here. I think it’s going to take a lot of hard work, but I do think we’re going to put a product out there that the community can be really proud of.”

Burno first heard about the opening when the Huskies fired Mark Montgomery in early January amid a 1-7 start. After weeks of discussion with Frazier and Courtney Vinson, senior associate athletic director for sports administration, he knew the opportunity was too good to pass up on.

“It was just a matter of understanding what Sean and Courtney had in regards to the vision of the program — what were their expectations, and, more importantly, what was their commitment to try to get this program in the top half of the [Mid-American Conference]?” Burno said. “It was something that the more and more I learned, the more and more I was intrigued by the opportunity.”

Burno said the idea of coaching first intrigued him his sophomore year while attending St. Paul Anthony High School in New Jersey. A 1998 graduate, he played there under then-head coach Bob Hurley, who he considers one of his biggest mentors. Hurley, a 2010 inductee into the Naismith Memorial Basketball Hall of Fame, began coaching at St. Anthony in 1972 and led the program to 26 state titles before retiring in 2017.

“He’s definitely a person that gave me the tools and the understanding of what it takes to be successful on and off the court,” Burno said. “He’s somebody that I have in high regard.”

After graduating high school, Burno played four seasons for the Blue Demons and was part of the team’s NCAA Tournament squad in 2000. He was also named to the 2001 Conference USA All-Tournament Team and ranks third all-time in program history with 201 career steals.

Burno first embarked on his coaching career in 2007, when he became head coach of boys’ basketball at Marmion Academy while also serving as an economics and physical education teacher. After three seasons at the high school level, the Jersey City native became an assistant coach at Towson University in 2010. After one season at Towson, Burno became an assistant coach at Manhattan College, where he worked with head coach Steve Masiello and helped lead the Jaspers to a 15-win turnaround from the previous season.

In 2012, Burno joined now-Chicago Bulls head coach Billy Donovan’s staff at Florida. He helped lead the Gators to Elite Eight and Final Four appearances in 2013 and 2014, respectively, along with Southeastern Conference regular season titles both seasons.

“Coaching with Billy Donovan really helped me understand that there’s so much more that goes into winning versus just plays and getting the best players,” Burno said. “Mental approach was something that I learned under him. How to get guys in the right space mentally was something that we did a really good job of at USF.”

Burno then joined the Sun Devils’ staff as an assistant coach in 2015 before he was promoted to associate head coach in 2016. The opportunity was also a chance for him to coach with Bobby Hurley, current Sun Devils head coach and son of Bob Hurley. During his tenure, Burno helped Bobby Hurley guide Arizona State to a pair of NCAA Tournament appearances — the First Four in 2018 and the First Round in 2019 — while winning 20+ games both seasons.

While from a professional standpoint, Burno said, he didn’t hesitate to take the opportunity at Northern Illinois, it was tough for him to leave Tempe because of the relationship he had built with Bobby Hurley. He considers Bobby Hurley his best friend, and, like his father, one of his biggest mentors.

“These opportunities don’t come around often, and, so, I wanted to make sure that I was making the best decision,” Burno said. “And, after talking to Bobby and my family, they all unanimously said, ‘This is the best thing to do.’”

Making the transition from Tempe, Ariz., to DeKalb, Ill., Burno will look to improve a Huskies squad that finished 3-16 (2-12 MAC) last season and lost seven of its final eight games. He described his coaching style as detail-oriented and disciplined while prioritizing his players’ needs.

“I want my guys to play with freedom, but we also have to be extremely disciplined on both sides of the ball,” Burno said. “Sometimes, it’s a walking contradiction to your discipline and freedom on offense. But that’s a balancing act that we’re going to try to do — give our players freedom, but also be extremely disciplined — and we’re going to earn that through practice and practice and practice.”

Burno arrived on campus last Sunday and is in his first week of leading summer practices. While the Huskies remain months away from opening night, he is already working with his players to establish team goals for the 2021-22 regular season. After playing in Chicago and beginning his coaching career just 32 miles from DeKalb, it is coming full circle for Burno as he becomes the 29th head coach in program history.

“We understand that we need to get better every day,” Burno said. “We need to compete, and we need to start being willing to start over the very next day. That’s what we’ve preached from the moment I’ve gotten here, and that’s what we’ve preached the last 48 hours. Overall, I do think success is going to be measured [by] wins and losses, but, for me, it’s going to be, ‘Are we getting better?”