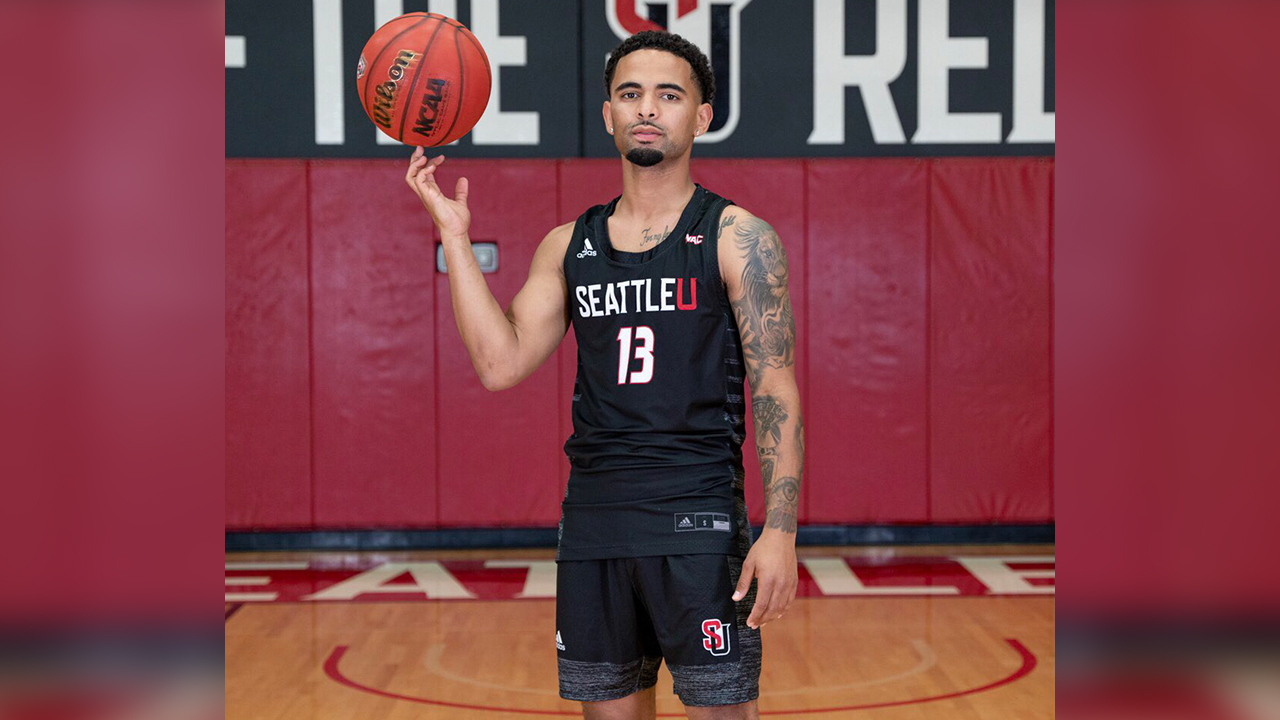 Kyree Brown in his new Seattle U uniform. (Courtesy: @seattleumbb/Twitter)

SEATTLE — The Seattle University (SU) men’s basketball program revealed its five-man 2021 signing class which they hope will combine with the team’s nucleus of returning players from this past season to lead the Redhawks back to the top of the Western Athletic Conference (WAC).

The 2020-21 NCAA basketball season happened during the COVID-19 pandemic, forcing athletes to undergo strict COVID testing and follow other safety protocols. SU finished with a 12-11 record, however they had seven conference games canceled due to COVID-19 protocols, including five in a row. The Redhawks ended up losing in the WAC Tournament semifinals to Grand Canyon University who would go on to win the WAC and represent the conference in the nationwide NCAA Division I Men’s Basketball Tournament. On the court, Seattle was led by sophomore guard Darrion Trammell who averaged 20.5 points per game in his first season after transferring from City College of San Francisco. Junior guard/forward Riley Grigsby also played a starring role, averaging 17.8 points per game.

To complement these two stars and the other returning players, head coach Jim Hayford and his staff  recruited a group of five diverse athletes. Brody Nunn was the Redhawks’ first 2021 commit back in November 2020. He is a 6-2 guard from Melbourne, Australia and comes to Seattle from Haileybury College where he played with current Seattle rising sophomore Kobe Williamson. Nunn averaged 18.5 points per game during his most recent season as a junior in 2019.

On April 14, Hayford announced three more 2021 commits. Clancy Bird, a 6-foot-9 forward, will join Nunn and Williamson as the latest member of the Australian pipeline for this program. He is from Sydney, Australia and has spent the past five years competing at St. Augustine’s College where he is fresh off averaging 23 points and 12 rebounds this past season.

In addition to those two international recruits, the Seattle men’s basketball program announced two transfers from U.S. colleges. Brandt Chatfield, a 6-foot-10 forward out of Orofina, Idaho, is transferring to Seattle after spending the last two seasons not getting a lot of playing time at Washington State. Kyree Brown, a native of Oakland, Calif., is the latest City College of San Francisco (CCSF) player to transfer to Seattle. After putting up almost nine points and six assists per game during CCSF’s latest season in 2019-20, Brown is excited to reunite on the court with former CCSF teammates Nate Robinson, Darrion Trammell and Emeka Udenyi.

“Their being here was a huge factor for me in deciding to come. At this level, it is rare to play with people you know,” Brown said. “I started playing with Nate and Emeka in fourth and fifth grade and then with Darrion in high school. Having four guys from the same area is special. At City (CCSF), we had a great system and chemistry and now for me it’s just about fitting back in.”

Brown explained that in addition to reuniting with former teammates, he committed to Seattle because of Hayford’s belief that the combination of him, the four other new players and the camaraderie that the returning players developed last season could lead the Redhawks back to the NCAA Tournament for the first time since 1969. Brown said that he is willing to do whatever is needed to help the team win whether that be knocking down shots, playing tough defense and/or being a leader. He also expressed his hopes of being able to have fans at games so they can feed off their energy.

Finally, on April 20, Cameron Tyson, a Pacific Northwest native and graduate of Bothell High School in Bothell, Wash., announced that he would be returning home and transferring to Seattle. Tyson has spent the past two years on the University of Houston’s men’s basketball team, redshirting his first year and then playing on last year’s team that made the Final Four. Throughout the season, he scored 6.2 points per game and hit 35 three-pointers, third most on the team.

The Redhawks anticipate that these new recruits and the ability to play a full season with fewer COVID restrictions will help them achieve greater success this coming winter.