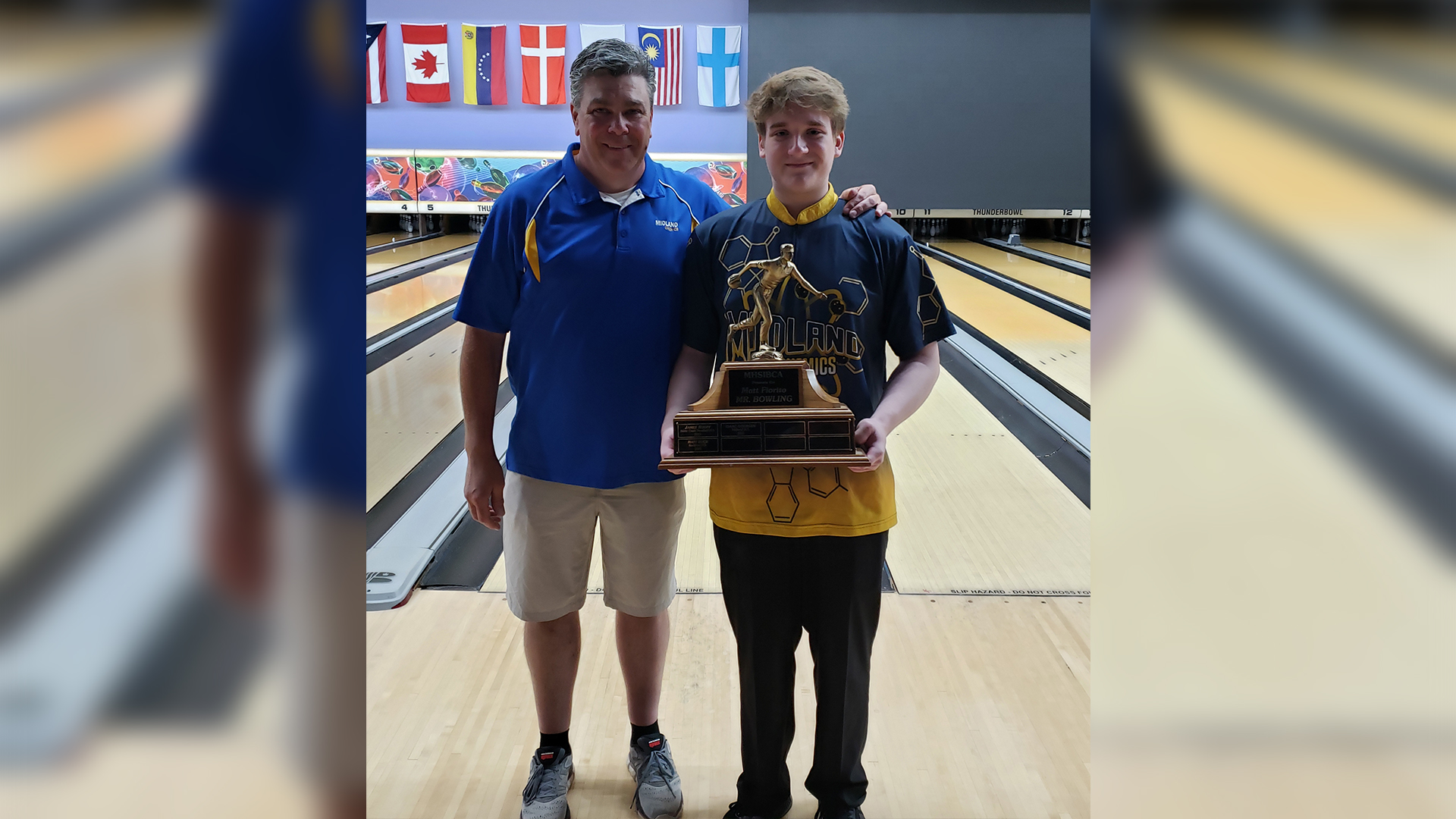 Izaac Goergen became the first bowling state champion in Midland High School history as a junior, and followed it up with a second state title as a senior. (Courtesy: @midlandchemics/Twitter)

MIDLAND, Mich. (BVM) — Izaac Goergen continues to dazzle on the lanes. For most, it is no surprise to see the success he is having, as Goergen was destined for a bowling life from the very beginning.

At less than a year old, Goergen pushed his first bowling ball down the lane. By 7, he began bowling competitively, and has never looked back on what has been a successful career to this point.

The Goergen family has always been about bowling, and it began with the Midland High School grad’s grandparents owning their own bowling center in Iowa. Goergen’s father, Bo, has also been in the bowling industry for over three decades, and has owned Northern Lanes in Sanford, Mich., since the 1990s

The left-handed bowler has also been able to learn plenty in the sport from his father. Bo has not only been in the industry, but is a remarkable bowler himself. Bo has competed in 41 USBC Open Championships and set a record with an eye-popping 862 singles series in 2009. He has also competed on the PBA Senior Tour.

“I’ve always wanted to be in the world that he was in when he was younger,” Izaac said. “Getting to meet people through him has always been one of my favorite parts of bowling. He’s a very good bowler and has taught me a lot.”

Although Izaac claims he didn’t always take bowling seriously right away, he got more and more into it, and before long, he was displaying some of the same talent his dad has. At just 12 years old, Izaac bowled an impressive 290 game.

“That was the highest anyone in our program had had at that age,” Izaac noted. “My dad knew that I had something special but I really didn’t figure it out until sophomore year of high school.”

As a freshman at Midland, Izaac didn’t perform quite up to his expectations, but was still an honorable mention conference player. It was indeed his sophomore season for the Chemics where Izaac’s game began taking shape, however.

After a couple tournament wins, Izaac continued his stellar play in the postseason by winning regionals. He averaged well over 200 down the stretch, and although he would suffer an opening-round loss at state, the stage was set for a strong finish to his high school career.

“That year was kind of a turning point for me,” Izaac said. “I started to see that I’m good enough to be in this position and that I have the talent and the knowledge to be here.”

Izaac’s game continued to progress over the summer between his sophomore and junior years. Competing in the Junior Gold Championships with thousands of the best bowlers from across the country, Izaac achieved a top-50 finish in his division.

Although he began his junior year in a bit of a slump, the bowler would again pick up his play in the stretch run of the season. As a junior, he finished second at regionals, but was much more prepared to compete at state.

“I went to state feeling good physically and mentally,” Izaac explained. “Knowing I’ve been there before, I went in feeling I could get to that spot and that I deserved to be there.”

Izaac would finish third in qualifying at state, and won all four of his matches to take home a state title — the first individual bowling state championship in Midland history.

“It was a lot of relief because it was a very long day, but it was just pure joy,” Izaac said. “It was nice to know that my hard work was paying off and getting into that winner’s circle at that high of a level is really crazy. Being able to win that first state title for Midland was also crazy.”

Poised to repeat in his senior season, Izaac began facing nothing but adversity. With the majority of lanes closed for long stretches of the pandemic, the 18-year-old was not able to keep his game as sharp as he may have liked.

For a while, his senior bowling season at Midland also wasn’t a sure thing. By the time the Chemics finally had a chance to get back out and compete, though, the rust was evident.

“We were just in a scramble to get everything back to normalcy,” Izaac said. “The first couple meets were definitely subpar. But about half way through the season, it kind of clicked.”

Getting back into the groove, Izaac once again produced a strong finish to his season, making it to state and finishing as the top qualifier. However, his chance at going back-to-back almost disappeared in the semifinals against Holt’s David Schaberg.

“I’ve been bowling against him for years, he’s an incredibly talented bowler,” Izaac said about Schaberg. “I had a 20-pin lead going into the last game, but in the ninth frame, I threw a terrible shot.”

Izaac was left with a split in the ninth frame, but came back and threw three pure strikes when he had to in the 10th frame. Still, he needed help to win.

“I was so proud of how I threw those three shots and it forced him to get the first strike in the 10th,” Izaac added. “He threw a great shot that would have struck 99 out of 100 times. But it just left the measly seven pin, and I ended up getting away with it. That was one of the most tense moments of my life, but I’m grateful I got lucky and took that momentum into the next match.”

In the finals, he would bowl 463 across two games, comfortably defeating Ian Cain of Livonia Franklin. As a result, the Midland standout became the first-ever MHSAA Division I boys bowling back-to-back state champ.

“It was a pretty wild ride,” Izaac said. “It’s incredibly special and I worked incredibly hard for it. It means the world to me and I hope it puts the bowling program at Midland on the map and helps our program to get better. I love bowling and to have my name left in the history books in Michigan is awesome.”

Last month, Izaac’s special season was honored further within the state as he was named Michigan’s Mr. Bowling. It was a perfect cap to his time at Midland, but his bowling career is far from over.

Soon, Izaac will begin his tenure at Concordia University Ann Arbor where he will continue to compete on the lanes for the Cardinals.

“We have a stacked team coming up these next couple years,” Izaac noted. “I’m very excited to be with them. My goals are to be an All-American and get some national championships under our belt. I think our team is capable of it and I’m very excited to have this opportunity.”

Izaac will compete in the Junior Gold Championships once again this summer after not having the chance to last year. He will begin entering some adult tournaments as well now being 18. The continued high-level experience is another stepping stone in what Izaac hopes will be a decorated bowling career that maybe even sees him follow in his dad’s footsteps at the pro level.

“I would like to say my career could go as far as possible and would like to have that opportunity to bowl professionally, win titles and do everything I’ve been dreaming about since I was little,” Izaac said.