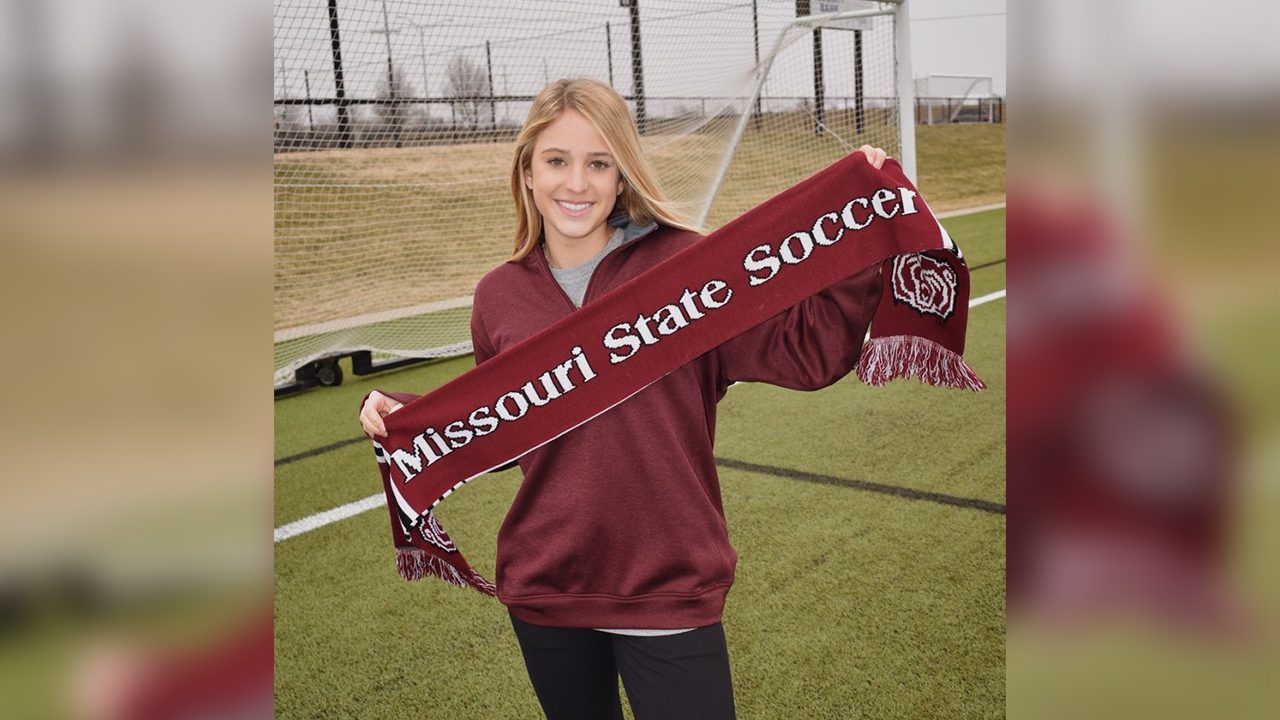 OVERLAND PARK, Kan. (BVM) — Five years between state titles might not be a long drought for some girls soccer programs, but it was for St. Thomas Aquinas. The Saints claimed the first-ever Kansas state championship in 1993 and won 15 more over the next 23 years, never going more than three years without a title.

By the time Grace O’Keefe’s senior year with Aquinas began in fall 2020, she was already one of the most accomplished soccer players in the state and had landed a scholarship to play Division I soccer with Missouri State University. But unlike hundreds of former Saints players who came before her, O’Keefe had yet to experience winning a state title. She came close as a sophomore when Aquinas reached the Class 5A title match but lost a 1-0 battle with rival St. James Academy. O’Keefe and the Saints would’ve likely made another strong run at the title the following season which was lost to the COVID-19 pandemic.

“It left a really bitter taste in my mouth,” O’Keefe said. “This year coming back I think we were all really fired up and ready to make it count.”

The Gatorade Kansas Girls Soccer Player of the Year made the most of her final opportunity this spring, leading Aquinas to the 17th state title in the program’s storied history and ending that five-year championship drought.

“We had 11 seniors this year and all of us were super close so to be able to go out like that and have an awesome senior season was incredible,” O’Keefe said, “especially after missing out on last year.”

O’Keefe scored 13 goals and had 12 assists this past season and finished her Aquinas career with 48 goals and 22 assists. Fittingly, the team captain’s final goal was the Saints’ lone goal of the state title match against Blue Valley Southwest, which would ultimately be won by Aquinas in a penalty kick shootout.

“All of my high school career kind of led up to that one moment,” O’Keefe said of her final goal. “I had been in a little bit of a drought for scoring so to be able to — I can’t even describe it. It was unbelievable.”

O’Keefe had already established herself as one of the elite talents in the state prior to her senior season with Aquinas. She led the Saints in goals as a freshman and as a sophomore and was a first team all-state selection both years. O’Keefe was also named a 2020 United Soccer Coaches High School All-American despite missing out on her junior season that spring. Last fall, she officially signed her letter of intent to continue her soccer career with Missouri State.

O’Keefe drew interest from other Division I college programs from Power 5 conferences and was in talks with the University of Kansas and Kansas State University, but after talking with former Aquinas teammate Kyli Jackson, a soon-to-be-junior at Missouri State, she began to consider the possibility of becoming a Bear. The chance to pursue the major of her choice, mechanical engineering technology, while also still playing Division I soccer, would also be a key factor in O’Keefe’s decision to join Missouri State.

“I talked to the coaches and the coaching staff was awesome right off the bat,” O’Keefe said, “and then I went down there and kind of fell in love with the campus and then academically everything just kind of fit into place because I’m able to pursue a major that at some of the top Division I programs I would probably not be able to major in.”

Aquinas head coach Adam Lamb is confident that O’Keefe will thrive with the Bears and will begin making an impact early in her college career — just as she did in high school with the Saints.