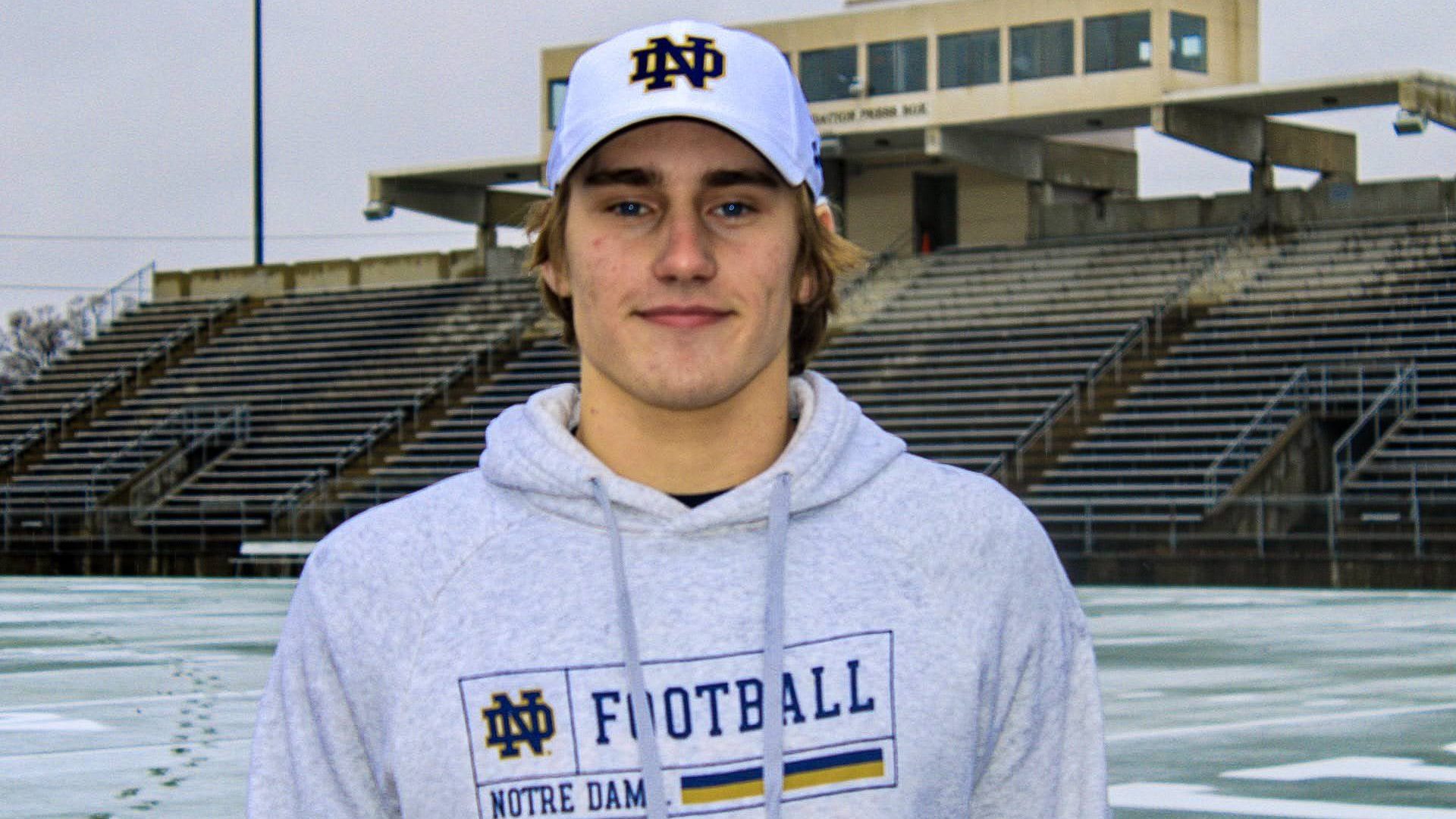 Josh Burnham will be taking his talents south when he suits up for the Notre Dame Fighting Irish in 2022. (Courtesy: Sean Burnham)

TRAVERSE CITY, Mich. (BVM) — Not a lot of guys have the immense amount of talent that Josh Burnham has on the football field. While he also plays quarterback for Traverse City Central High School, Burnham’s true home is at outside linebacker, and it is why his future is so bright.

Ranked No. 85 nationally and No. 2 in Michigan in the 2022 class by 247Sports, Burnham has put in a lot of effort to get to the level he is at. While he has always played multiple positions and continues to do so, Burnham’s skills as an outside linebacker — whether it is his impressive length or his quickness — are always on full display.

Burnham looks up to a couple different linebackers as role models, but perhaps the top is former Michigan State defensive star, Max Bullough. Burnham actually had the opportunity to learn from Bullough when he coached at Traverse City Central during his freshman season, and cherished the moment.

“I like to model my game after Max Bullough,” Burnham said. “He was actually a coach at my high school my freshman year. It’s been awesome getting to know him and building a connection.”

Soon, Burnham will follow in Bullough’s path as a Division I college football player. The 17-year-old’s first offer came at the end of his freshman year from Western Michigan.

“My offensive coordinator came over to my house and told me the news,” Burnham said. “I was speechless and had no idea what to do. It was just crazy and it went on from there.”

Before long, bigger offers began rolling in, beginning with Big Ten schools such as Iowa. Soon after, Burnham’s dream school in Michigan was also in touch.

“I got a text from my head coach that the linebacker coach from Michigan wanted to talk with me,” Burnham said. “That was my dream school growing up. Then he offered me and we were all just screaming and going nuts.”

Eventually, Burnham was garnering interest from some of the top programs in the nation, even having a chance to speak with Nick Saban and Alabama.

“One led to another and it just kept going and going,” Burnham added. “The next big one was Alabama which was crazy. Who knew a kid from Traverse City, Mich., would be talking on the phone with Nick Saban.”

But the very next day, Burnham received his final offer which came from Notre Dame. After long consideration, the football standout narrowed his options down to three, which included the Fighting Irish, his dream school in Michigan and the Wisconsin Badgers.

After a couple good visits at Wisconsin and Michigan, Burnham took a self-guided tour at Notre Dame. From there, the decision was easy.

“As soon as I stepped on campus, everyone looked so professional, wanted to be there and you could tell there was just something special about the place,” Burnham said. “I just felt like the culture and feel of Notre Dame fit me best.”

Burnham’s official commitment to Notre Dame was a special moment, as he announced his decision on his birthday — also St. Patrick’s Day — on CBS Sports HQ.

“Once I knew that this is where I wanted to go, I started thinking it would be pretty cool to commit to Notre Dame on my birthday, which is also St. Patrick’s Day,” Burnham said. “It was definitely something special that I’ll remember forever.”

Another factor in Burnham’s decision to commit to Notre Dame is the strong relationship he has built with Fighting Irish defensive coordinator, Marcus Freeman.

“I’m very pumped,” Burnham said about playing for Freeman at Notre Dame. “Sometimes we’d just FaceTime and talk about anything, which is awesome knowing they’re not just a football coach, but are there to help you with anything you need. It’s just something special and I’m definitely looking forward to working with Coach Freeman. He’s one of the best out there.”

Once at Notre Dame, Burnham will try to get on the field as soon as possible. He hopes he can help lead the Fighting Irish back to the College Football Playoff, and this time take home a national championship.

If his career goes as planned in South Bend, Ind., Burnham hopes he might be trading in his college jersey for a professional one in just a few years.

“It’s always been there and I’m sure it is for every kid,” Burnham said about dreaming to play professionally. “It’s going to take a lot of hard work to get there and even to get to college it takes a lot of hard work. It is a goal of mine to get to the NFL, and I’m going to do everything I’m capable of to do so. But first, I have to help my high school team win that state championship, and then after that go to Notre Dame and win a national championship.”

A future in the NFL would bring what has already been an impressive career for Burnham full circle. The 6-foot-4, 225-pound standout was always a bigger player than most throughout his youth, allowing him to discover his talent early on in his football career. While he always played linebacker on defense, Burnham showed true potential on offense as a running back as well.

In his first season at Traverse City Central, Burnham competed primarily at the JV level. But during the postseason, he got called up to varsity, and after an injury to a starting linebacker, Burnham’s number was called. From there, a star was born.

“Bullough was coaching and he gave me the go ahead blitz call,” Burnham said. “My very first play ever on varsity in front of who knows how many people, I got a sack.”

Burnham became a full-time starter on both sides of the ball in his sophomore season. One of his best performances included a shutout victory against one of the Trojans’ rivals where Burnham ran for a touchdown, caught a touchdown and scored on a pick-six.

As a junior, Burnham would take on a new and even bigger role on offense. During the offseason, he was approached to play quarterback for the Trojans. It was an opportunity the 17-year-old decided he did not want to pass up, and with his all-around talent, the results were impressive.

In addition to 61 tackles, one sack and one interception on defense, Burnham accounted for nearly 2,000 yards of offense as well as 30 total touchdowns. The new QB guided the Trojans all the way to the MHSAA Division 2 state semifinals.

For Burnham, getting to see the other side of the ball at that position only helped him learn more that he can apply to his future at linebacker.

“It was really helpful to know the offense and how everything works,” Burnham noted. “I can use that on the defensive side of the ball, too, and it really helps me at linebacker knowing what the offense would do.”

The run to the state semis is all the more impressive considering what the Trojans had endured throughout the fall. Not even knowing if they would have a season at the start was tough enough, but even more difficult were the constant stops and starts of the season, as well as a lengthy delay as they played in the postseason.

“Last season’s run was very special,” Burnham said. “Whenever I think of last season, I think of our very first team workout. At the end of that day, our coaches called us all over and told us the news that we were getting shut down. We didn’t know if they were joking or how to take it. We didn’t want to take no for an answer.

“After we played a couple games, we got shut down again. We just kept doing everything that we were doing before and we were able to start playing again. I think it was the district finals down in Midland, and I remember at the end of the game, everyone was coming together talking about something. It sounded like we were going to be shut down again. We didn’t play a single game for two months and finished the season in January. It’s not what we had in mind but we were going to do whatever we could to be able to play. It was an interesting year.”

This fall, Burnham and his Trojan teammates will have a chance to make a further run and earn a state championship. For the rising senior, it is also an opportunity to cement his legacy at the school and within the entire city.

“We’ve all been thinking about getting to the state championship,” Burnham said. “We were so close last year and just want to put Traverse City back on the map. I want to let people know that kids up north aren’t people to look past and I know that I can be a role model to the younger kids we have in our program. I try to just be the best person I can be, not just as a football player.”

Soon, the talented Burnham may be headed for fame and fortune elsewhere. But his roots are planted at home, and right now, he is embracing the moment.

“It seems like everyone in Traverse City knows your name, even if you don’t know them, which is pretty special,” Burnham added. “But at the end of the day, I’m just a kid from Traverse City trying to play football with my best friends and take it all in.”