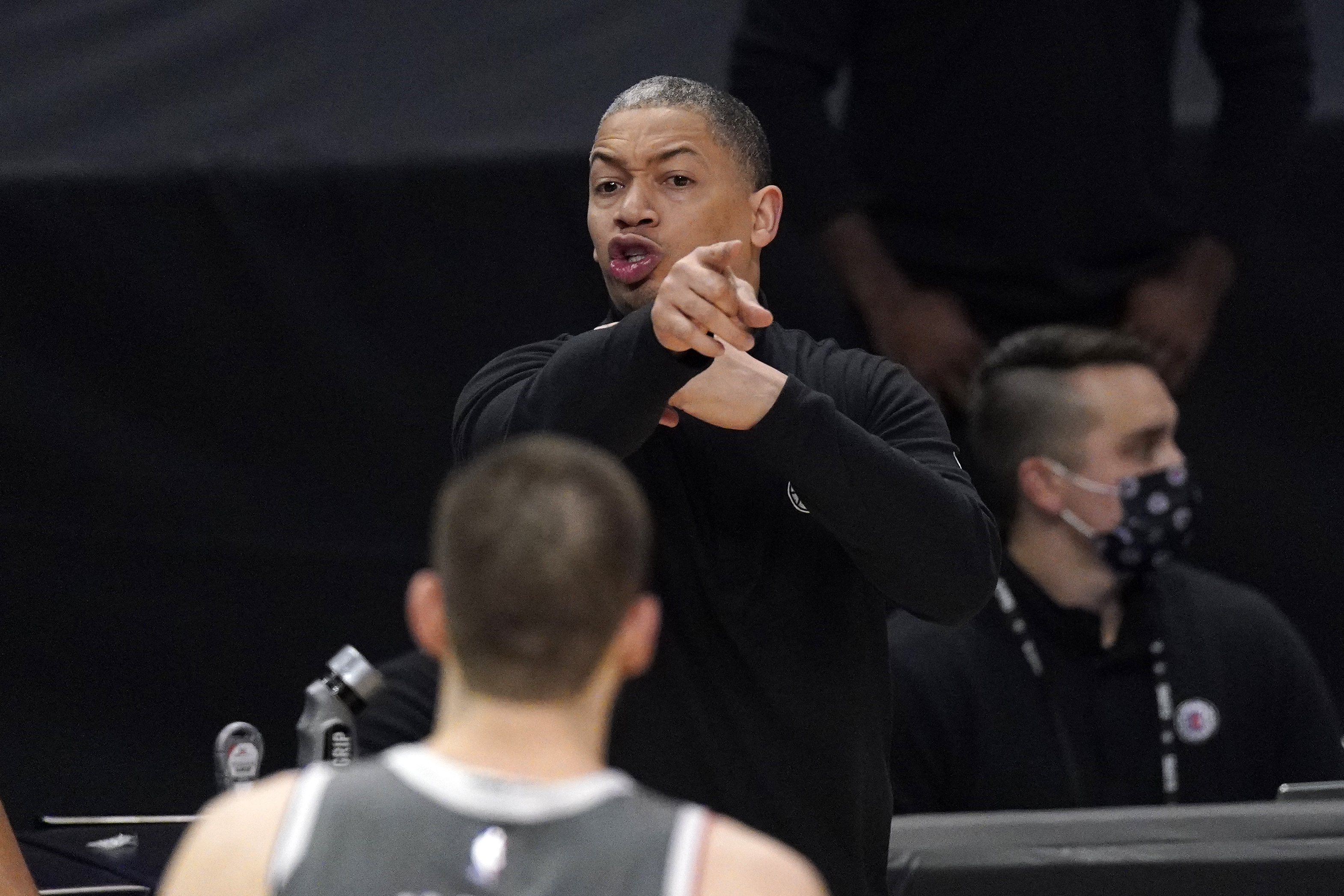 LOS ANGELES (AP) — The Los Angeles Clippers have been unflappable amid high stakes throughout these playoffs. They recovered from 0-2 deficits against Dallas and Utah to reach the Western Conference finals for the first time in franchise history.

Down 0-2 to the Phoenix Suns, they’ve rallied within a victory of tying the series and forcing Game 7. Much of their resilience can be credited to Tyronn Lue, who is a NBA-best 10-2 in elimination games as a coach.

Lue has described being in the playoffs as his “happy place” and he thrives on the chess match moves required from game to game.

“Sometimes it’s tough because adjustments mean some guys can’t play, some guys play more, and you’ve got to be able to accept that,” he said. “It means a lot just for those guys to trust me, to understand that whatever I’m doing is the best for the team, not for me.”

Lue lets his players know ahead of time whether they’ll be starting or coming off the bench. He’s quick to hit them up with encouragement via texts and phone calls.

Lue has kept calm throughout the postseason frenzy.

“He always has a chill demeanor,” Marcus Morris said. “It’s like having one of my better friends as the head coach. That’s the best thing about him, he’s wide open. He allows you to speak up. That goes a long way with players in this league.”

The Clippers’ season is on the line again Wednesday night at Staples Center against the Suns, who lead the series 3-2. Phoenix is a 1-point favorite, according to FanDuel Sportsbook.

LA is likely to be without two-time NBA Finals MVP Kawhi Leonard, who has been out with a right knee sprain. The team provided no update Tuesday regarding center Ivica Zubac, who sat out Game 5 because of a MCL sprain in his right knee.

The Clippers have proved they can win without those two starters, as well as potential starter Serge Ibaka, whose back surgery ended his season. Both of their wins so far have come by 14 points each. Phoenix’s wins have been by a combined 11 points.

“They are one-possession games where they could have went either way,” Morris said.

Last year, the Clippers blew a 3-1 series lead to Denver in the conference semifinals, with chemistry cited as the main issue. Doc Rivers got fired and Lue was promoted from the bench to the top spot.

It was Rivers who first encouraged a doubtful Lue to aspire to a head coaching job. Rivers is one of some high-profile mentors Lue has had over the years, including Phil Jackson, Scott Skiles and Stan Van Gundy.

After retiring as a player in 2009 having won two NBA titles with the Lakers, Lue started out assisting Rivers in Boston. Lue spent one season with the Clippers before becoming an assistant with the Cleveland Cavaliers. He was elevated to head coach after David Blatt’s firing and as a rookie, Lue guided LeBron James and the Cavs to the 2016 NBA championship. They reached the Finals again the following two years, losing both times to Golden State. Lue was fired after an 0-6 start to the 2019 season.

Lue honed his ability to tell highly paid superstars what they might not want to hear in Cleveland, giving him practice in dealing with Leonard and George during his first season in charge in LA.

“If they are doing too much, I’ll let them know,” Lue said of his team. “But I want guys to feel no pressure, just go out there and play their games. That’s what got them to this point. It feels good to hear guys saying positive things (about him), but they are the one with talent that got so far.”

Chris Paul has just about done it all in his 16-year career.

But his playoff fortunes have been mixed. In 12 postseason appearances, he’s made the conference finals twice and lost in the first round six times.

Now he’s one game away from reaching the NBA Finals for the first time at age 36, but refuses to look ahead.

“Not until the job is done,” he said. “We can talk about all that then, but right now it’s just laser focus. Three wins don’t win the series.”

Deandre Ayton all but disappeared in Game 5, and the Suns will need to get their big man more involved if they want to close out the series in LA.

Ayton had 10 points and 11 rebounds in 36 minutes, his fewest points since Game 3 of the conference semifinals against Denver. He took just nine shots — his fewest of the series — against a smaller Clippers lineup.

“Got to do a better job getting it to him,” Paul said. “They got like three people sort of boxing him out or trying to hold him down, so we just got to pick our spots better and be more aggressive.”

Ayton’s two best performances against the Clippers came in Games 1 and 2, when he scored 20 or more points. His “Valley Oop” slam with 0.9 seconds left won Game 2.