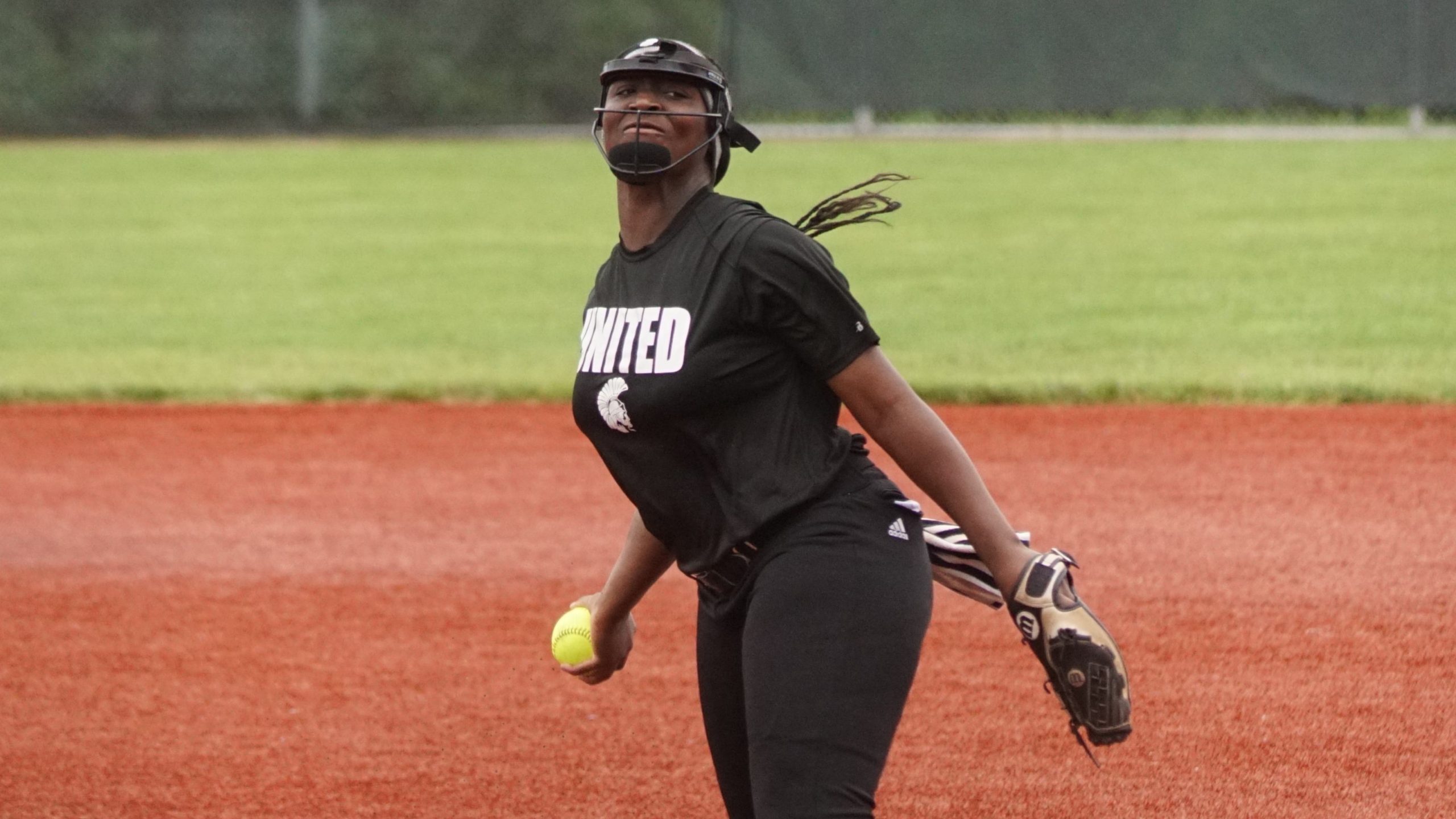 TOPEKA, Kan. (BVM) — Nija Canady is one of the nation’s top softball recruits in the Class of 2022. She would also be a highly sought-after Division I basketball recruit if that was the sport the Topeka High School rising senior wanted to play in college.

This past winter when Canady was trying to lead No. 1-ranked Topeka to its first girls basketball state title in nearly four decades, the two-sport star was rated by ESPN as a four-star prospect and the No. 15-ranked forward in her class. A difficult-to-guard 6-footer who Trojans head coach Hannah Alexander described as “a beast inside,” Canady averaged a double-double of 20.3 points and 12.3 rebounds as Topeka reached the Class 6A state final before falling short of the title in a 61-54 loss to Shawnee Mission Northwest.

But despite how good she may be at basketball, which is the sport she enjoyed the most while growing up, softball has taken a more prominent place in her heart and in her life.

“Being a pitcher has something to do with it,” Canady said. “Everyone’s always looking toward you. You’re always the one with the ball in your hand, so I feel like that played a role in it.”

Canady is seemingly in complete control of the game when the ball is in her right hand, as evidenced by her dominant performance for the Topeka softball team this past spring. The Gatorade Kansas Softball Player of the Year went 21-0 in the circle with a 0.26 ERA, allowing only 37 hits while striking out 232 batters in 109.1 innings pitched and leading the 25-0 Trojans to the Class 6A state title. In four postseason games, Canady allowed just two unearned runs and seven hits and fired a one-hitter with 16 strikeouts in a 7-1 state championship game victory over Olathe North.

Canady is just as much of a force at the plate as she is in the circle. She batted .515 with 16 home runs and 59 RBIs and an impressive 1.364 slugging percentage during Topeka’s historic unbeaten run to the state title. No 6A team prior to the Trojans had ever finished the season as undefeated champions.

“It was amazing,” Canady said. “Sometimes I’ll be going through my camera roll and I’ll see videos of it or like pictures I took with my team and I’ll go back all through them just trying to relive the moment because that doesn’t happen too often. Not many people win state as it is, but to go undefeated, it’s just amazing. I think that makes it even more special.”

The title also brought a feeling of relief for Canady and many of her teammates who were also members of the Topeka girls basketball program which fell one win short of its first championship in 39 years.

With another year of high school left, Canady said it’s a goal to “add more trophies to the trophy case,” and the Trojans will certainly be favored to do just that again next spring in softball while the girls basketball team will also get another good shot at ending what will be a 40-year title drought come next winter. In the meantime, Canady is also still thinking about her college future. She’s yet to decide where she’ll compete in Division I athletics, but the two-sport star knows it’ll be in softball and not basketball, despite having the potential to go DI in both.

As Topeka’s junior class president who maintains a 4.46 weighted GPA, Canady will have no shortage of college suitors. She has already compiled a short, yet impressive list of Division I scholarship offers, including one from Stanford, the only school she has taken an official visit to, and one that could be an ideal fit based on what Canady is looking for in a college.

“I definitely want to go to a competitive college that challenges me every day,” Canady said.

Because of the recruiting dead period that was just lifted June 1, many college coaches — even some who have offered scholarships — haven’t had the chance to watch athletes like Canady in person until this summer, so more offers are likely to flow in for the soon-to-be senior. Canady said she’s not rushing her decision, but it also might not be long before Topeka’s talented two-sport star knows where she’ll be headed next.