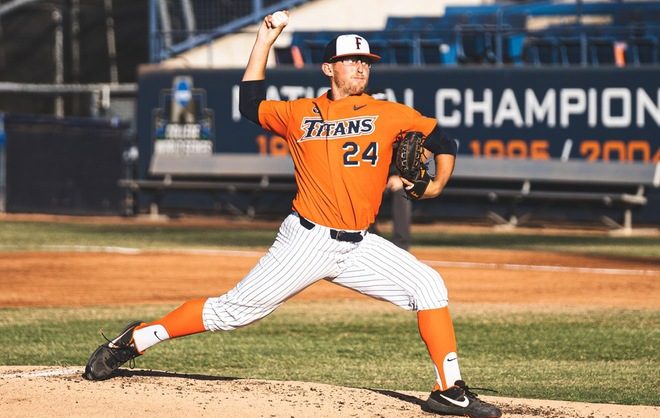 FULLERTON, Calif. (BVM) – The depth of promising college pitchers available in the 2021 MLB Draft was too much for one team to pass up. The Cleveland Indians selected 19 pitchers out of their 21 total picks, and it was due more to an excess of talent rather than out of necessity.

One of the many talented pitchers drafted by Cleveland was Cal State Fullerton’s Tanner Bibee. The right-handed pitcher was taken 156th overall in the fifth round on Monday night and continues a long tradition of Titans selected in the MLB Draft. The program has now had at least one player taken in each of the last 46 drafts and Bibee became the 309th Titan drafted since 1968.

My dream is starting!! Thank you so much for the opportunity @Indians Let’s get this thing rolling!! Thank you to everyone at CSUF and everyone who has been with me throughout the way. I am forever grateful! I am beyond excited to be an Indian! pic.twitter.com/GP43ImTKIN

The Titans’ ace finished the 2021 season with a 3.61 ERA, 67 strikeouts and a 7-6 record. Bibee’s best outing of the season came against USC where he tossed a complete game shutout while allowing just three hits, striking out five and not allowing a single walk on 88 pitches. He amassed 236 strikeouts to go along with a 3.82 ERA over four seasons at Cal State Fullerton.

Bibee is a 2017 graduate of Mission Viejo High School (CA) where he earned All-South Coast League honors as a senior and Seaview League MVP recognition as a junior.