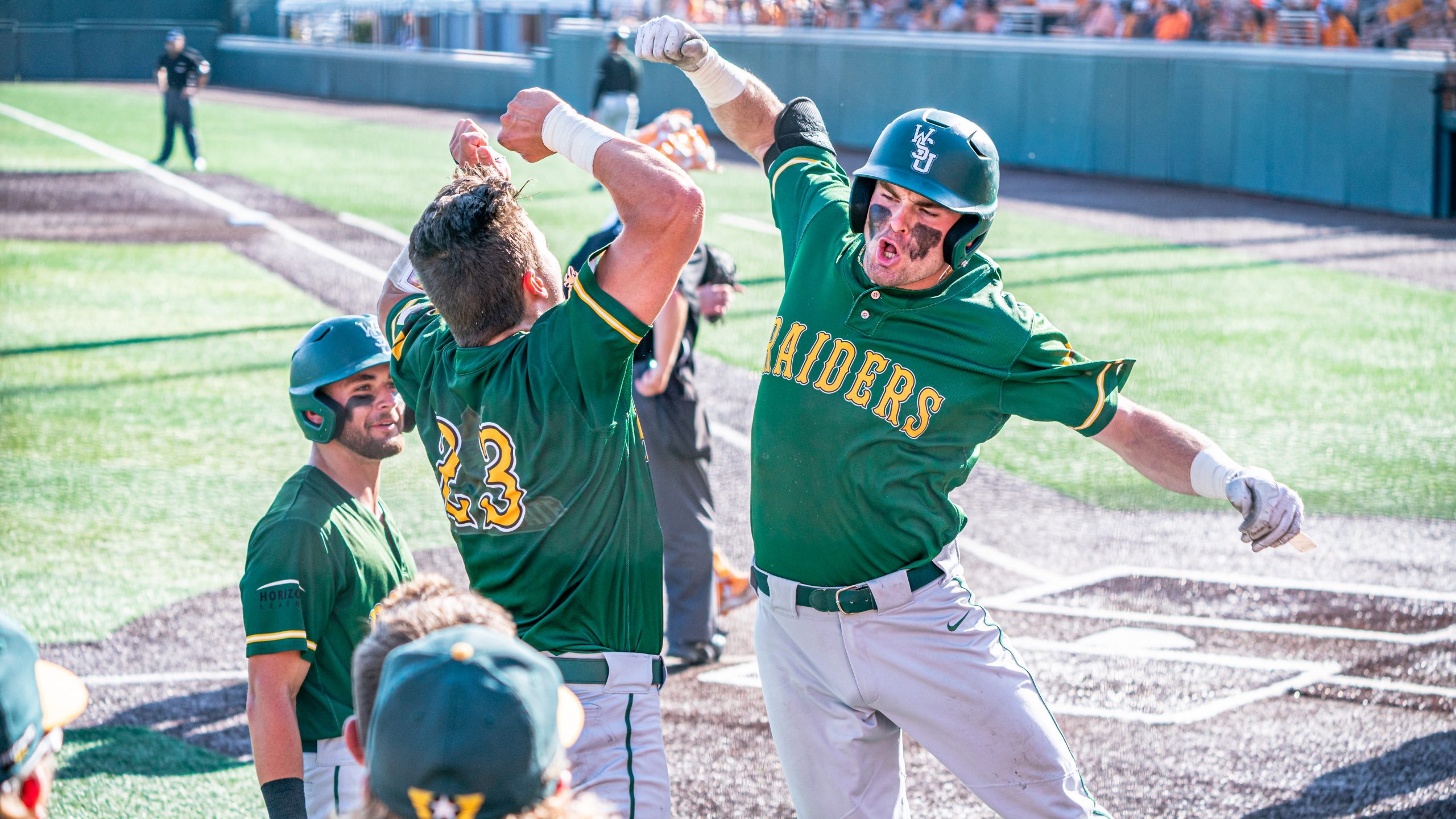 Black (Right) finished his junior year with a batting average of .383 with 59 RBIs through 48 games played. (Courtesy: Wright State Athletics)

MILWAUKEE (BVM) — Even before the MLB Draft began on July 11, Wright State University infielder Tyler Black had a good inclination that he would be going on the first day of the event.

The Toronto native was coming off a stellar junior season with the Raiders and knew there were a few teams that were looking at him and then he got word that the Brewers wanted to take him with the 33rd pick in the draft.

Surrounded by friends and family at a viewing party, Black watched as his dream came true and the Milwaukee Brewers selected him with the 33rd pick in the 2021 MLB Draft. Making him the first Canadian drafted this year and the second highest drafted Wright State player of all-time.

“Once that moment happened and my name was called it was crazy,” Black said.

Since then, he has been trying to come to terms with the fact that he has achieved a goal he has had for longer than he can remember.

“It still seems kind of surreal,” Black said. “Obviously I’ve been dreaming of this moment for a long time. It definitely hasn’t sunk in yet but I’m just ready to go and excited to get going.”

That has always been Black’s mentality, ready to put in the work. It has been a calling card for him since before his Wright State days when he was growing up in Toronto.

“He’s a guy that was under the radar when recruited (out of high school),” Wright State head coach Alex Sogard said. “He was a guy that came to a small school and he just worked himself into being a first rounder.”

As a kid, Black played baseball, football, hockey and even a little basketball. He even admits to probably being better at hockey than baseball early in high school, but for him, baseball was his sport.

“Just really loved the game of baseball, loved watching it, and loved playing it,” Black said. “Was always around the game so I think that was the reason I decided to go with baseball. I knew it’d be a longer path and obviously being a Canadian it’s kind of difficult to be seen sometimes. Just love the game more so I decided that I was going to go that route.”

However, Black was still underrecruited coming out of St. Andrew’s College, a high school in Aurora, Ontario. Nate Metzger, the associate head coach and recruiting coordinator at Wright State, had connections in the Toronto area and found Black. Once Metzger and Sogard saw him play and talked with him, they knew Black should be a Raider.

“I think we were fortunate he was kind of under the radar and we felt like we needed to get him… We knew he could fit right in,” Sogard said.

“I was a pretty under-recruited kid out of Canada… Wright State came on really late and you know just loved the place when I visited,” Black said. “Loved the coaching staff, loved my teammates that were there. The culture was the main thing that drew me there.”

Black described the culture as blue collar and hardworking which resonated with him and played to his strengths.

“He’s a tremendous worker… He’s a guy that takes it to the next level,” Sogard said.

That showed from day one in Dayton, Ohio, and Black entered college ready to prove to everyone that he was meant to play at this level.

“I knew internally that I was a damn good baseball player and I just needed to go prove it on a national stage,” Black said.

The first step in that process was to make his way onto the everyday roster and earn a spot as a starter. Initially planning to redshirt him, Sogard and the rest of the Raider coaching staff quickly realized that this kid from Toronto was here to play and needed to be out on the field.

“When he came in our plan was to redshirt him…We brought him to school and didn’t think we needed him the first year,” Sogard said. “I remember the first week of practice I’ll never forget it seeing him out on the field and he just looked so good I’m like, ‘This guy has a shot to play right away.’”

Once he had that momentum, Black didn’t stop.

“It got to a point where he just won a job and I had to write him in the lineup everyday and it really took off from there,” Sogard said.

Black finished his freshman year appearing in 52 games and starting 44 of them. He had a .353 batting average with 41 RBIs and 1.069 on-base percentage. Black was named 2019 Horizon League Freshman of the Year and Horizon League First Team member as well as making it on the Horizon League All-Freshman Team.

“In Canada it’s really hard to get seen sometimes but yeah that freshman year I just wanted to show people what I could do,” Black said.

Unfortunately, a shoulder injury that required surgery and the pandemic ended his sophomore season early. Entering his junior year, Black was not only determined to bounce back from his sophomore year but also get his name in draft talks.

“I knew I had a good chance of getting drafted but obviously you never know how high,” Black said. “My thought process going into this year was I just wanted to make a statement and really prove to people what I could do. Prove to the country what Wright State is about and what this program is about. I had a lot of motivation.”

It was also a goal of his to get drafted after his third year of college ball, and right from the start, Black was achieving those goals.

In the first game of the season against Vanderbilt, Black hit a double off of Kumar Rocker, the 10th overall pick in this year’s draft. From there, he went on to have an incredible season that culminated in a Horizon League Championship and an appearance in the NCAA Tournament. The Raiders didn’t get out of their region, but in a 9-8 loss to Tennessee, Black went 4-for-5 including two home runs.

“I think we showed a lot of people what Wright State is about,” Black said.

Just as important, Black showed everyone what he was about. He was named a NCAA Division I Third Team All American, made the Knoxville All-Regional Team and was the No.7-ranked hitter in DI baseball. In all, Black started all 48 games for the Raiders with a .383 batting average, 59 RBIs, 13 home runs and an on-base percentage of .496.

“He’s just scratching the surface a little bit… I think he can be so much better I’m excited to follow him,” Sogard said.

With Black’s work ethic, there is no doubt he will have a chance to reach his full potential and Black is ready to put in the work.

“I’m excited to get started,” Black said. “I hear great things about the city of Milwaukee, the Brewers organization and the fan base… I’m very excited and thankful to be a Brewer.”