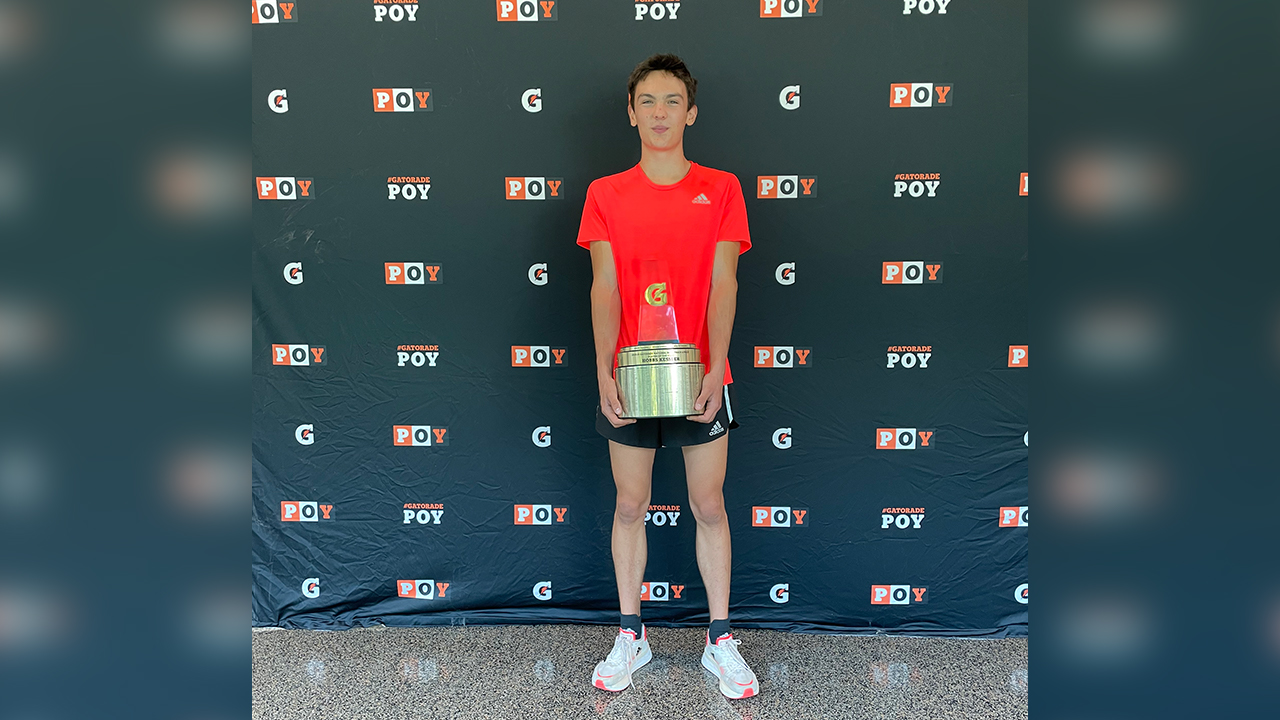 ANN ARBOR, Mich. (BVM) — Hobbs Kessler has emerged on to the national track and field scene time and again over the past year. Now, he has earned perhaps the top honor any high school athlete can get, as Kessler was named the Gatorade National Track and Field Player of the Year.

“It’s pretty exciting,” Kessler said about winning the award during a press conference last week. “It was just cool to have all the people who have been around and helped me here to celebrate with me.

“I figured I was in the running but I wasn’t sure how it would work. I’m excited to win it. I feel deserving of it and it’s always fun to be recognized.”

Kessler’s tremendous year kicked off when he set the national high school indoor mile record back in February with an incredible time of 3:57.66. In March, he set the Michigan record for a two-mile run with a time of 8:39.04. The time was also the fourth fastest all-time in U.S. high school history.

To cap off his high school career at Ann Arbor Skyline, Kessler won two Division I MHSAA state championships in the 800 and 1600-meter events with times of 1:54.13 and 4:16.88, respectively.

However, Kessler’s incredible dominance did not stop there, as he later qualified for the Olympic trials in the 1,500. His time of 3:34.36 to reach the trials broke the national under-20 record and would also have been an NCAA record.

Kessler would go on to win the first heat race at the trials, but would fall short of the 1,500 final. Still, it was a season that will always go down in the history books for the standout runner.

“It was really a great season,” Kessler said. “There weren’t too many hiccups which was awesome. Everything went smooth and the way I wanted it too except maybe the last race. But it’d be hard to be hungry if everything went your way.

“I see a lot of really great athletes’ names on this trophy so it’s pretty cool to have my name next to them. I’m most proud of my running achievements, but that’s what led me to this award. I’m grateful for it.”

While Kessler has always been a talented athlete, many may not have seen some of the marks he was able to reach this year coming. Although managing the COVID-19 pandemic was a difficult time for many athletes, Kessler credits it for helping him reach new levels.

“Over quarantine when everything was shut down, even if I didn’t feel like it, I showed up every day and did what I needed to do to get better at running,” Kessler explained. “That was the foundation for this season.”

Just a few weeks back, Kessler was slated to run at Northern Arizona University this fall. However, prior to the trials in late June, the Michigan native signed a professional contract with Adidas through the next two Summer Olympics. Although foregoing running at Northern Arizona to turn pro may have been a tough decision, Kessler is happy with what he will be doing.

“It was probably the hardest decision I ever had to make,” he said. “It made for a few really crappy nights trying to fall asleep where my brain was just spinning. Luckily it wasn’t a decision I had to make alone. I had my folks and a lot of people that I really trust in the running community. Once I talked to a lot of people about it, the decision became clear that it was time and I had a really good opportunity and should take advantage of it. Although I’m pretty disappointed to not be running at Northern Arizona, I’m super excited I’m able to stay with the people I’ve been running with. I’m so glad I can continue those relationships.”

Kessler will still attend Northern Arizona and also begin training there in the fall. Then it will be back to Ann Arbor in December where he will continue his training with former Michigan coach, Ron Warhurst. There are many, including Warhurst, who think someday Kessler could be one of the best runners ever in the U.S. That may come true sooner than later, but for now, Kessler is focused on what he can control in the present.

“It’s pretty crazy to think about,” Kessler said. “I’m just focusing on the day-to-day and hopefully I’ll get there at some point.”