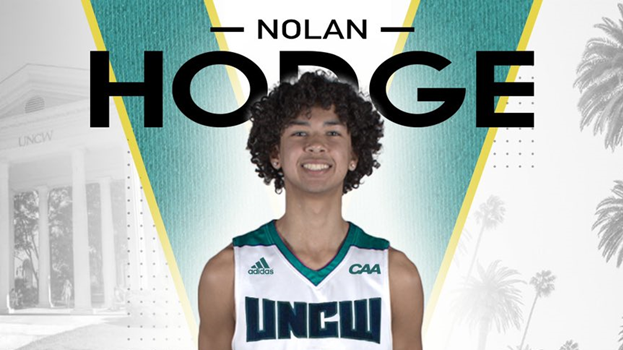 GREENSBORO, N.C. (BVM) – Northern Guilford guard Nolan Hodge made his decision to attend the University of North Carolina Wilmington once he graduates next year. Hodge is a rising senior at Northern Guilford, so his commitment to UNCW comes much sooner than most high school athletes. For many student-athletes, this decision comes a bit later in their high school careers.

This is not to say however that Hodge’s commitment is premature, but instead it is a sign of certainty in his choice. When asked about this certainty, and why he chose UNCW, Hodge mentioned consistency from the coaching staff.

“Coach Siddle and Ponder were very consistent with their recruiting, so I stated to form a great relationship with them,” Hodge said.

The consistency the coaching staff showed in communicating with Hodge and building the relationship was vital in his decision-making process. To go along with that consistency and foundational relationship with coaches, Hodge also stated that UNCW provided an environment that he looked forward to being around.

Hodge’s early commitment not only highlights the certainty he has in his decision, but also the arduous process playing at the college level can be. Playing college sports is a dream that often does not come to fruition for many, and Hodge acknowledged just that.

“This is what a lot of kids dream of so for me to be able to play in college is special,” Hodge said.

Hodge is innately aware that getting to the next level is a rarity and understands what it means to be able to take that next step. He is also aware that taking that next step did not happen overnight. Gaining attention from college coaches to obtaining a scholarship comes from more than just playing on game days. It comes from countless workouts and the constant improvement of skills.

When asked about how it felts to see his hard work pay off, he said, “It feels great because there have been many frustrating days in the gym, but they helped me become the player that I am today.”

The road to becoming a college athlete is not easy and can be, as Hodge pointed out, frustrating. Looking back, he knows the work that got him to this point and the work that it is going to take to push him further in his college career.

That college career, however, is still a little bit further in the future. One year away in the future to be exact. With his early commitment it can be easy to forget that there is still one year of high school left.

Hodge is not overlooking his senior season by any means. Although he knows where he wants to go in the future, he also knows where he is in the present. Coming off an impressive junior season both individually and as a team, Hodge still feels there is more to be done.

Playing a conference-only schedule last year due to the COVID-19 pandemic, the Northern Guilford basketball team went 14-0 in their conference and went on to win two state playoff games before eventually losing in the third round.

Hodge is looking to expand on that success both personally and as a team.

“My goals for the team are to win the conference and make a run in the state playoffs,” the rising senior said. “Personally, my goals are scoring my 1,000th point and becoming a better leader.”

A goal perhaps as equally important however, is Hodge’s desire to fully take in his last season.