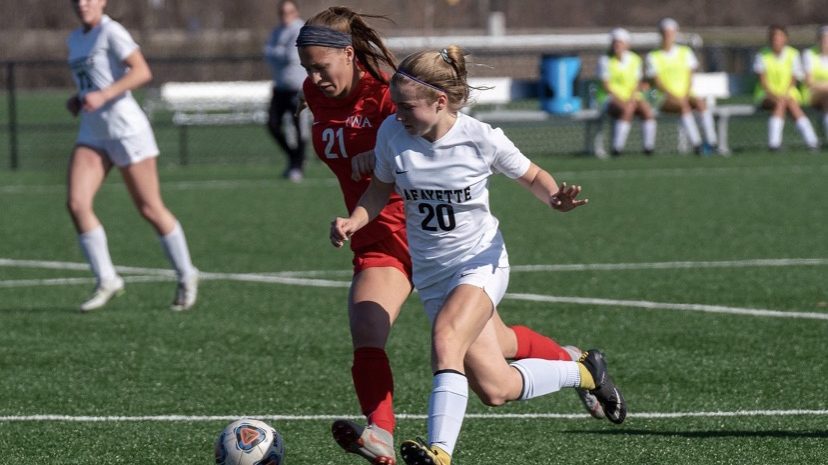 Rylee Howard, No. 20, scored 41 goals to go along with 12 assists in her junior season this past spring. (Courtesy: Rylee Howard)

WILDWOOD, Mo. (BVM) — Rylee Howard has always displayed immense talent on the soccer pitch. However, her junior season this past spring was her best yet.

Over the course of the season, Howard scored 41 goals to couple with 12 assists for Lafayette High School.

“I already had a lot of motivation going into my junior year,” Howard said. “But not having last season really piled it up. My goals were to get 40 goals, Gatorade Player of the Year and All-American. But most importantly, I wanted my team to win and get that district title. We had been 10 years without it and were finally going to host the district tournament. I knew how much it’d mean to everybody if we won that.”

Howard’s spectacular play indeed helped the Lancers to a district championship and Class 4A state tournament appearance. However, the team success and individual success of their star did not happen overnight.

“I work everyday,” Howard said. “I try to train three to four hours a day. I’ll train in the morning, I’ll train in the afternoon, I’m always in the gym and always have a ball by my feet. I just like to work and am really motivated.”

That mentality has been with Howard from the very beginning. Growing up in California, she grew an instant attraction to the constant pace of soccer.

“Initially, I liked it because everybody else played it,” Howard mentioned. “What really drew me to it was that it was way faster paced compared to the other sports I played.”

The center forward quickly grew an attacking mentality and mindset, looking up to role models like Mia Hamm and Abby Wambach. After moving from Sacramento to Malibu, Calif., Howard began taking the game even more seriously, resulting twice in a roster spot at her age level on the U.S. national team.

After her move to the St. Louis area, Howard began playing club soccer with St. Louis Scott Gallagher, taking her game to even further heights.

“My time with St. Louis Scott Gallagher has really helped me grow as a player,” Howard said. “The pace is nice and fast so transitioning to high school, you’re ready to go.”

Howard was more than prepared for her first season at Lafayette High School. While she was nervous going into the campaign, she scored an impressive 30 goals as an all-conference and all-district performer. Although her team would lose a rivalry game in the district round, there was plenty of momentum to build on.

However, like all high school athletes, Howard did not have that chance last spring due to the COVID-19 pandemic.

“I was super excited to get back to high school soccer, I was counting down the days,” Howard said. “I was on vacation and we got the call, and it was just heartbreaking, it was terrible. I had gotten so excited and ready to go. I really wanted that district title, but it didn’t work out.”

The spring of 2020 may have been heartbreaking for Howard, but by the end of summer, one of the best moments of her young career occurred when she officially announced she would continue her soccer career in college at the University of Wisconsin.

I am very excited to announce that I have verbally committed to continue my athletic and academic career at the University of Wisconsin! Thank you to all my coaches, friends, teammates, and family who helped me along the way. So excited for the future!#OnWisconsin pic.twitter.com/oihZ3BRWQW

Several schools — including Wisconsin — came onto Howard’s radar during her freshman year. Although recruiting rules changed, the soccer standout was ready to make her decision last summer.

“I’d talked to them [Wisconsin] and had been to one camp and got to meet the coaches,” Howard explained. “I was like, ‘oh, okay I kind of like this place.’ The coaching staff is amazing, that’s one of the things that sold me. They’re so nice and friendly, and they want to win. I also love to play in the cold. I visited Madison, Wis., and loved the campus. I could really see myself there and committed right after.”

Although Howard is still a year away from her chance to play Division I, Power 5 college soccer, she is already preparing her goals and mindset for the next level of her career.

“I want to become an even better player, score a lot of goals and really work to earn a spot on the team,” Howard said. “It’s going to be a lot of work and I’m going to have to put in a lot of effort to really prove myself. I’d like to win a Big Ten trophy and make it far in the NCAA tournament.”

Down the road, Howard would love the opportunity to play soccer professionally, no matter where that journey might take her. That goal could become realized if the talented 16-year-old continues to stack her resume as she did this past season.

It began in the spring, as Howard had an opportunity to be invited virtually to the U.S. Soccer U18 national women’s soccer team meetings. Then, after her junior campaign at Lafayette was finished, the accolades began rolling in.

Howard first earned all-metro player of the year honors from the St. Louis Post Dispatch. Soon after, she was named Gatorade Missouri Girls Soccer Player of the Year.

“It felt amazing because I have always come so close to winning things, but had never actually won anything,” Howard said. “Just to see how happy and excited everybody was, it just topped off the season. I was very honored.”

The Gatorade award also recognized Howard’s academic success with a weighted 3.83 GPA in the classroom, as well as her volunteer work locally with SPENSA — a special-needs soccer association.

“I had wanted that since freshman year,” Howard added about the Gatorade award. “That was really big and a huge, huge honor. I was so thankful.”

Earlier this month, Howard earned yet another tremendous honor after being named a high school All-American by United Soccer Coaches — the first from the Lafayette program since 2000.

We are so proud to announce that our Rylee Howard has just been named a United Soccer Coaches High School All-American!!! She is the first All-American girls soccer player at Lafayette since the 1999/2000 season. We are unbelievably proud of your achievements!! pic.twitter.com/vg0BAB4YGw

“If anything, I really wanted that the most,” Howard said about being named an All-American. “Once again, it was a huge honor and just an unbelievable feeling, I was so excited. It was huge for me, huge for my team and I couldn’t have done it without my teammates who really pushed me.”

After the heartbreak of 2020, Howard’s year of 2021 could not have gone much better. However, like any great athlete, Howard is hungry for more not just at Wisconsin or during a potential professional career, but also in her final season on the pitch at Lafayette.

“My goal is to do it all again and get my team past the district championship to the final four,” Howard said. “I believe we have the team to do it this year. I want Gatorade again, I want All-American and I want 50 goals instead of 40.”