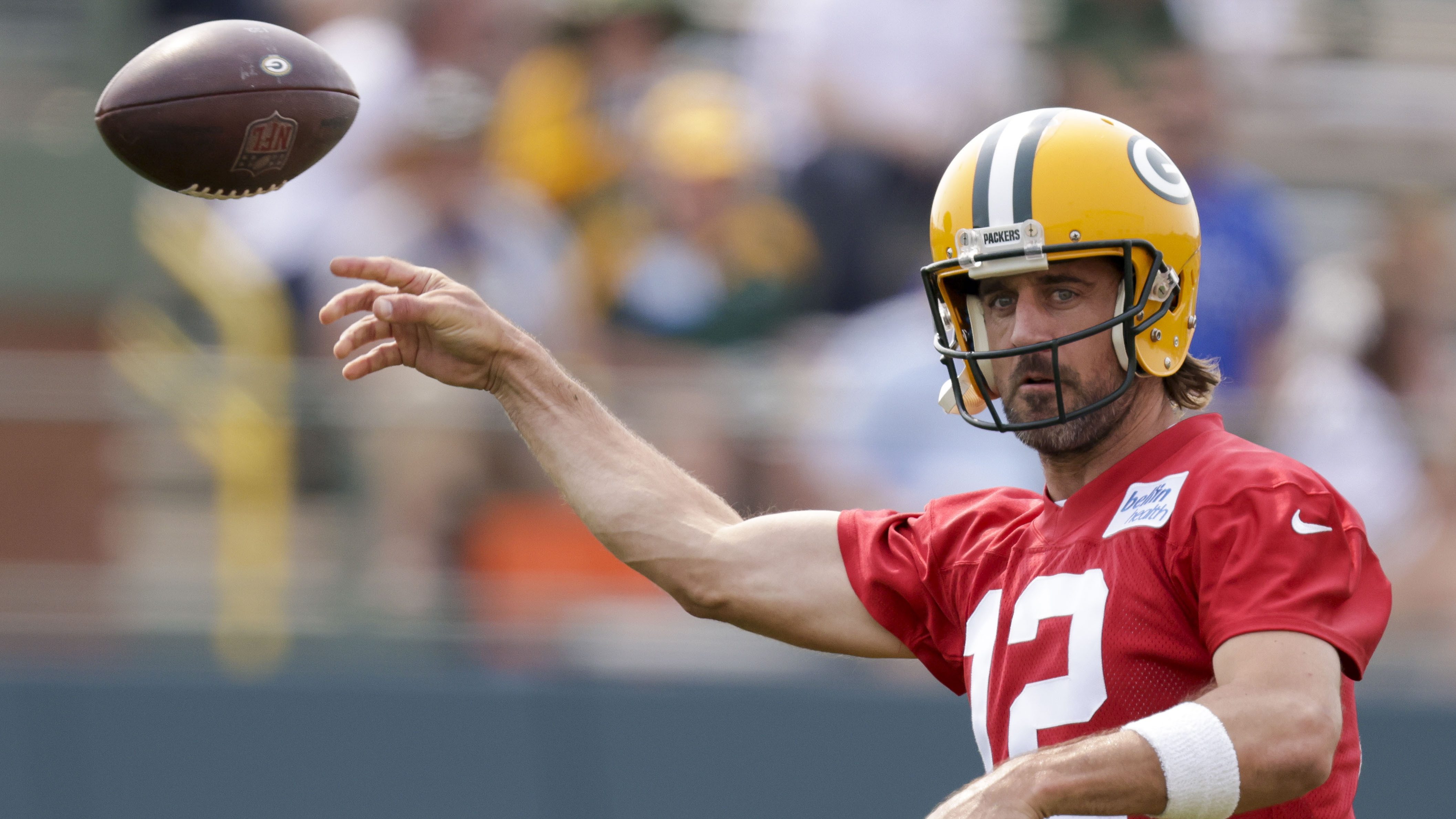 Aaron Rodgers and Deshaun Watson appeared on the field at their teams’ first training camp practices. Lamar Jackson was absent from his after testing positive for COVID-19. Zach Wilson is still away and without a contract.

It was all about the quarterbacks in the NFL on Wednesday — those present and the few who weren’t.

In Green Bay, Rodgers worked out with the Packers and then detailed some of the unresolved issues that caused friction between him and the franchise.

The reigning league MVP, who previously skipped organized team activities and mandatory minicamp, said during a nearly six-minute long response that he wanted to have a voice in the team’s decision-making process and believed the organization didn’t treat departing high-character veterans with enough respect. He also was hoping for a commitment from Green Bay beyond this year, but didn’t receive that.

“I felt like if you can’t commit to me past 2021 and I’m not part of your recruiting process in free agency, if I’m not a part of the future,” the 37-year-old Rodgers said, “then instead of letting me be a lame-duck quarterback, if you want to make a change and move forward, then go ahead and do it.”

“I’m just going to enjoy this year,” Rodgers said, “and then revisit that conversation at the end of the season.”

It appears Rodgers will have a familiar face back in the offense as veteran receiver Randall Cobb sent out a tweet that he was returning to the Packers. Gutekunst said he couldn’t comment on Cobb, who spent his first eight NFL seasons in Green Bay, because a trade with Houston hadn’t been finalized, but Rodgers noted that “I’m really excited Randall’s coming back.”

In Houston, the Texans face similar uncertainty at the quarterback spot, but for much different reasons.

Watson was on the field despite having asked for a trade in January before 22 women filed lawsuits alleging that he sexually assaulted or harassed them in March. Houston police and the NFL are investigating the allegations, but no charges have been filed.

The trade request still stands for Watson, who reported for camp solely to avoid being fined $50,000 a day. The quarterback chatted with teammates and coaches during breaks in the action, but declined an interview request through a team spokesman.

In Owings Mills, Maryland, Jackson was absent for the Ravens after his positive test for the coronavirus. That comes after he also missed a game last season because he tested positive.

“You can obviously get COVID and then get it again,” Baltimore coach John Harbaugh said. “That’s kind of been demonstrated.”

Jackson was selected the league MVP in 2019 and is entering his fourth season with Baltimore. The Ravens won a playoff game with the dynamic quarterback for the first time last season, but Baltimore was then eliminated at Buffalo.

Running back Gus Edwards also tested positive, but Harbaugh wouldn’t say how long the two players might be sidelined.

In Florham Park, New Jersey, the Jets were still waiting to get their rookie quarterback under contract.

Wilson, the No. 2 overall draft pick in April, is the only first-round draft pick to not have a deal done after San Francisco signed quarterback Trey Lance earlier in the day.

Wilson’s contract is slotted to be worth $35.15 million over four years and include a $22.9 million signing bonus. But it appears the sides — the Jets and general manager Joe Douglas and Wilson’s agents — are working out offset language, a sticking point in the negotiations.

“Obviously, from the business side of it, there’s a lot of things that come into play,” coach Robert Saleh said. “When he signs, he signs. There are 89 other guys that deserve our attention. That’s where all our focus is right now.”

— Lance, the No. 3 overall pick in the draft, received a fully guaranteed four-year, $34.1 million deal in the morning — and then looked sharp at practice, including a pair of deep balls to Deebo Samuel and George Kittle.

The former North Dakota State star took snaps with the second unit, with Jimmy Garoppolo entrenched as the team’s No. 1 QB to start the season.

— Cincinnati quarterback Joe Burrow said his surgically repaired knee is “just about 100%” after his rookie season was cut short by the significant ligament damage in Week 11 last year.

The 2020 top overall draft pick isn’t expected to play much in the preseason, with the Bengals wanting to keep him away from most contact until the regular-season opener against Minnesota on Sept. 12.

“Feeling great,” Burrow said. “Still getting stronger in my legs.”

— Denver’s Drew Lock took the first snap of camp, with coach Vic Fangio giving him the nod over veteran Teddy Bridgewater because “he’s got more seniority with the Broncos, I guess. It’s really no big deal.”

Fangio said the Broncos will split the snaps between Lock and Bridgewater about evenly, with each likely getting a preseason start before a starter for the season is determined.

— Carolina running back Christian McCaffrey had a few explosive plays in the Panthers’ first practice at Wofford College, showing off moves reminiscent to those he made before injuries plagued him last season.

“I’m just so fired up to play football again,” said McCaffrey, who dealt with a high ankle sprain, a separated shoulder and a thigh problem while appearing in just three games.

“Injuries happen in football,” he said, “and I’m so past that.”