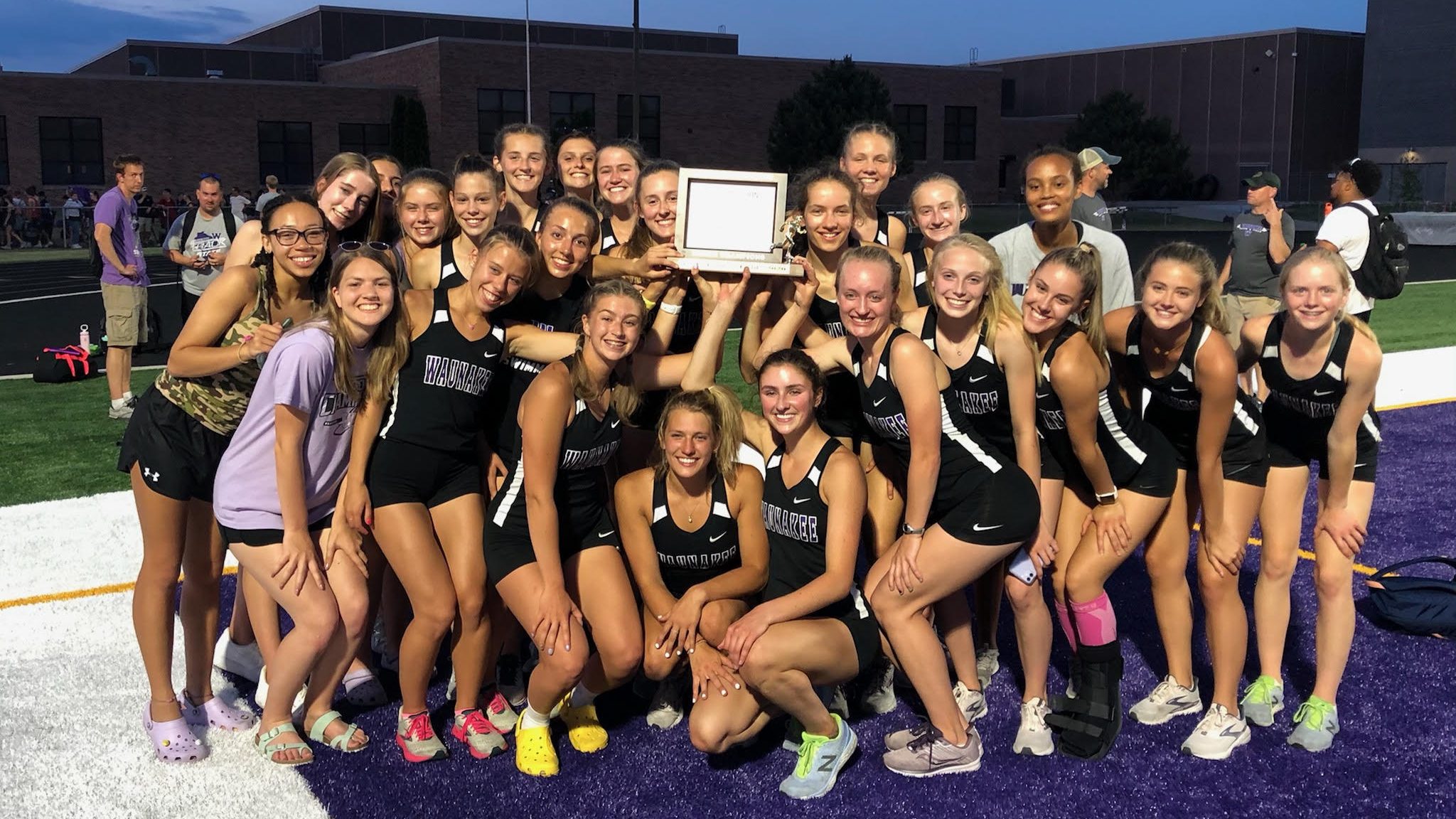 WAUNAKEE, Wis. — Led by sophomore Kyla Saleh’s state title in the high jump, the Waunakee girls track team had their best season in the history of the program, earning a fifth place at the WIAA Division 1 state meet in La Crosse on June 26. The team sent 21 athletes to the state tournament. Head coach Jen Grabarski answered our questions about the team and program as she looks forward to her 22nd year leading the team.

How does this year’s team fifth place finish stack up historically?
Jen Grabarski: It is our best finish as a team in the state. We have gotten in the top 10 but never this close to the top as a team prior to this. We have had a few more athletes there before but mostly due to alternates and this is probably the most events we have been in at one time. We have had a large number before but with most of the athletes that qualified this year being in multiple events it is one of our largest numbers.

What are your thoughts about Kyla Saleh’s state championship?
Grabarski: Kyla is one of the hardest workers on the team And that is saying a lot because we have a lot of hard workers. She puts in work at practice and goes above and beyond outside of practice. Her natural “hops” combined with her hard work make her a huge asset to our team and she truly earned this top spot in the State. The team fully embraced her and brought her in. We have a awesome, inviting group of upper class group that do a great job welcoming everyone. That plays a huge role in our success because everyone knows they have a ton of support. The upper class group also does a great job leading the others and teaching them how to push through and make it to that next level.

Who are some other team members who contributed to the team finish at state?
Grabarski: Chloe Larsen and Sarah Bova were key to our success over the years and as our senior leaders this season. They set the tone and have been key figure in our program’s dominance. Kylee Grabarski has also led the way and been a strong upperclassman along with Sarah and Chloe. These three have been the upperclassmen who have truly taken charge and brought our program to a new level. They are the silver medalists in the 4×400 relay team. We worked to find that fourth the last couple of years while these three have always pushed and worked extremely hard to be at their best and lead the team. These three also were on the state qualifying 4x100m relay that finished 10th in the State and set a school record in the 4x200m Relay. The consistent top performances by these three built a dominant strong program that will carry us into the future. A new contributor this season along with Kyla Saleh was Summer Grigg, our young fast, freshman sprinter. She made big gains throughout the season and made it to state in two events as a freshman.

Your thoughts on the depth of the program?
Grabarski: Although we have definitely had our “stars,” we have a lot of depth and underclassmen that look very strong going into the future. Our ability to fill relays strongly shows the depth of our team. Coming back next season we have: Senior leader Kylee Grabarski, junior Kyla Saleh, sophomore Summer Grigg coming back that have state experience. We have Malia Niles (sophomore) and Makenzie Wallace (senior) also returning that were on our state qualifying 4x800m relay team.

We also have some athletes that have a lot of potential in the future. We have Ava Endres (injured last season), a junior sprinter/hurdler. We have many young hurdlers that I believe will be moving into some lead roles this coming season: Sadie Grabarski (sophomore), Erin Denkert (junior), Taylor Horn (junior) and Georgia Rae Samuelson (junior). We also are looking to up our strength in the field events with many of our athletes who were new last season coming back with more experience and some time under their belts. We have a number of athletes coming back and coming up I believe can help make some strong relays.

How did the team deal with the challenges presented by COVID-19? What were your challenges as a coach and program leader?
Grabarski: The athletes dealt with the limitations put on us better than anyone. They just rolled with it and worked to overcome anything that was thrown at them. I was worried about wearing masks while competing. Trying to take a deep breath and get enough air exchange when they are trying to get to their top level is not ideal and in my opinion could have been dangerous. We were all very happy when we got to the point of being able to remove masks while in competition and working out. However, as I said, the athletes stepped up over and over again and just did what they needed to do to have a season.

As a Coach I just wanted to keep kids healthy and so we followed protocols and we were able to have an entire season without issue. With so many kids meeting at the meet we just had to be organized and really communicate well so no one missed anything. I believe communication is super important in a regular season, but during these difficult times it was even more important. We also saw more mental health issues arise. All the Coaches really stepped up and we just tried to have conversations and touch base more and more with the athletes. A lot of “check-ins” to make sure everyone was doing okay and to help them work through anything needed. That is something that we have always done but I felt we needed to focus on a bit more to ensure the health of all of our athletes.

What was your background in track and field?
Grabarski: I started as a volunteer coach while I finished up my teaching degree at UW Madison. I then moved into a part-time assistant and then right into head coach. My first year as head coach was my first year as a teacher in the district and I was planning my wedding at the time too. It was a crazy year of first. As I look back there were a lot of late nights planning and learning the ropes as I took over the track program. This season I just completed my 21st year as head coach with 10 conference championships on the girls side and two sectional team championships. I now have had a handful of state champions as well. I was voted Division 1 Girls Coach of the Year this season as well and received that news just last week.

How did you get involved in track and field/coaching?
Grabarski: I have always loved track and field. I ran at Waunakee High School and then continued competing at UW-Eau Claire after that. I had helped at many camps and was a camp counselor as well. I loved both volleyball and Track since I was little and have always enjoyed passing on what i had learned to younger up and coming athletes. So when the opportunity arose for me to volunteer and start coaching track and become JV volleyball coach I jumped at it. The head coach before I took over started taking me to head coach meetings and would show me different parts of the job throughout the season. After assisting for two years she announced at the end of the season that she wanted me to take over and that she was moving. I was nervous to take over so soon but wanted to take the challenge on as well and was hired as a physical education teacher in the district at that time as well. So it all fell into place. I love working with these athletes and helping them reach their true potential. Its so amazing to see them excel and do well. They just light up and it makes all the hours and time put in worth it.

What are some of the highlights during your coaching tenure?
Grabarski: I feel truly honored to receive coach of the year this year. I had no idea until one of my assistants sent me an article with it in it. I work hard to surround myself with smart, hard working, amazing assistants and I could never do what I do without them. The coaching staff we have had for the last few years is amazing. I am also proud of the fact that we have always had at least one or more state qualifiers every year that I have been head coach. We shifted from Division 2 to Division 1 my second year as head coach. A tough transition but we stepped up even then and had a couple of talented State-level athletes. Many conference championships for girls and also building the boys teams over the years and having a couple of years of taking conference champ titles with both boys and girls in the same year.

Biggest inspiration in your coaching career?
Grabarski: That’s a tough one because there are so many. There are many great coaches out there I am inspired by. But I have to say that I think I am most inspired watching the driven, hard working young athletes. To see them come into the program as freshman and when they dedicate and want to do well to see them soar! I get choked up every time I see an athlete just beaming whether its because of a personal best, just completing a tough workout or making it to the podium at state. I have had the true joy of coaching my own children. My son who is now 19 ran for me and now my daughter is a senior and my other daughter a sophomore. They have all chosen to come out for track and their success and love of the sport is inspiring. Then there are all the rest of the athletes that feel like my own children. I am moved and inspired by all of them.

What is the outlook for next season?
Grabarski: I believe we will have a very good season. We are graduating a lot of very talented athletes. But they have led the others to build a hard working, driven, strong foundation. I see this team just continuing to pass down the amazing team dynamic that has been building over the years which creates a winning attitude. The future looks bright.

How can families get involved in track and field?
Grabarski: We have a great track camp that we run in June every summer. The athletes teach the younger kids how to do events through games and drills to introduce them to everything. It is always a fantastic week and a ton of fun. We do fundraisers at different times throughout the year as well. Support there is always helpful to get the athletes uniforms and equipment when needed. So keep an eye out for those opportunities. Donations to the booster club that supports our program are always very welcome.